I recently upgraded to 20.04, but I know this bug existed in 19.10 and perhaps from the beginning. I enjoy the stock "familiar" Ubuntu Mate layout with the panel on the bottom. I have a laptop display with a 1366x768 screen on a standing desk with an Acer 22" display with 1680x1050 physically mounted above the laptop. I have chosen to have the Acer 22" as my Primary display so this is where all of my Mate panels appear. 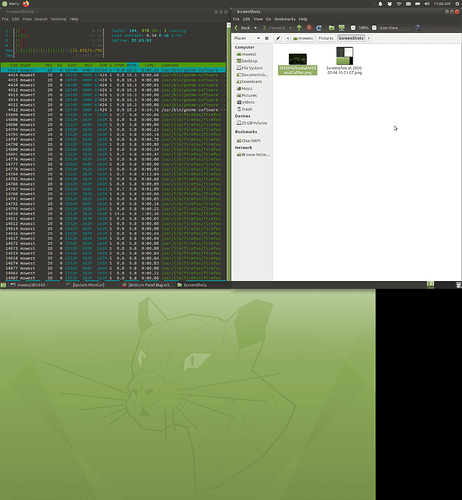 Maybe try using plank panel instead of a bottom panel to see if a UI change is more appropriate to your use case.

@pallebone I could certainly try that suggestion, it may serve as a good work around until the developers can look into the behavior of the "familiar" panel arrangement.

I guessing the developers probably have more experience with two or three displays being side by side. I believe that my unique stacked displays may not be used as frequently, so this layout bug might not have been noticed before.

If you need help creating a bug report just let me know.

I added a comment to the following bug report:

It appears this bug has been in Mate for a long time. It seems that this bug is the same as this bug report:

The first bug report is reported as "undecided" and the second is reported as "low" for priorities. Clearly this is not a show stopper bug, but it looks like one of those paper cuts that would be nice to get rid of, especially since it has been around for a while. I could do some testing of fixes, perhaps, although I don't know the procedure you have to do in order to test possible fixes. But since I have this rather unique dual screen set up, perhaps it would be helpful to the team.

Thanks for the links to the reports.

@mowestusa I spoke with Victor about this. The fixes that were tested caused a lot more problems than they solved.

He is still aware of the issue and has a patch in mind but hasn't had to time to get it all sorted.

Good to know, thanks @franksmcb. I tried @pallebone suggested work around using the Plank Dock, but that caused me to discover a new bug connected to Plank Dock, that I will need to report.

Plank Dock solves one issue. When you turn off "hide" function in Plank Dock the windows maximize correctly, never dipping behind the Plank Dock so that the bottoms of maximized windows are hidden. However, when you turn off Plank Dock "hiding" it doesn't allow you to drag a window to the lower screen vertically beneath it.

Keeping the "hide" function on allows you to drag windows to the secondary screen which in my case is vertically below my primary external screen. But this creates the same issue that I have with "hiding" the bottom Mate panel. It becomes very difficult to hit the right spot between the dual screens that will make the panel or Plank Dock reappear so you can use its functionality.

In going to report a bug for Plank Dock I found this one which is a different effect, but still a problem. There seems to be an issue with putting a panel on a shared screen boarder, which may be similar to the issue Mate bottom panel is having.

Here is the bug report I made for Plank Dock and linked to the Ubuntu Mate project too:

Not sure if this idea helps but you could make plank display on the second monitor - ie so its on the bottom of the bottom monitor and then you wouldnt have to find the location to make it appear. I guess you could also have it on the left or right hand side also not sure if you dont like that.

Yes, I'm going to try that as my current work around for now. I might also try working the the mutiny layout because this puts the second panel on the left side of the Primary monitor which would probably work well too. I'm guessing from what I have read, that putting Plank Dock on the left or right of my primary monitor would work as well. That would kind of be like Gnome which I run on my Fedora box at home. I like having all of my panels on the Primary monitor because that is the one that is at eye level at my standing desk. I'm not fond of having "functionality" or my most used apps on my laptop screen where I have to look down at them. I use that screen mostly for "secondary" information and apps I'm not accessing constantly.

Ubuntu Mate is great that it offers so many panel options for one desktop environment. I'm sure I will find some good work around with all of these options.

This issue happens to be as well. I use a 3 monitor setup with MATE. How I connect to these monitors is on a USB-C over Displayport standard on a docking station. Apologies for the Google Drive link for the anti-google ppl... Image was too large to upload directly...