Can you help me with panel thumbnails preview? I have glitches on preview.

Hi mnbgd,
Same issue for me, sometimes until some time running. I think is a bug for a relative new feature, hope probably solved soon.

Please file a bug report on this. Steps to do so are here.

This would be filled against mate-panel , in this case you can do an:

Please provide as much details as possible.

Was going to create a thread on this myself but then found this and may as well add what I've written already in a document to it.

Since the upgrade to 20.04, the version of gnome I was using as the interface was no longer supported very well and mate seems the most similar to it, so that is what I have switched to.

One of the main irritating things about it though is the pop up thumbnails for the tabs on the bottom panel. I am aware windows does this but I’m simply not used to it. It already says what it is so I don’t really see why you need an image (which is already overlapped by the title)

The biggest problem is that around half the time the thumbnails are not even correct. As one picture shows, it is just a zigzag pattern of multiple windows overlapping each other and it is very misleading. It at times it just a distorted mess or nothing even pops up. It also often shows a thumbnail of what is in fact the tab to the left or right of it. The title is correct, and that in my view is all you need. It seems overkill since you already have the title on the tab, then the thumbnail appears when you hover over it plus another title over laps some of the thumbnail!

Is there a way of disabling this feature? 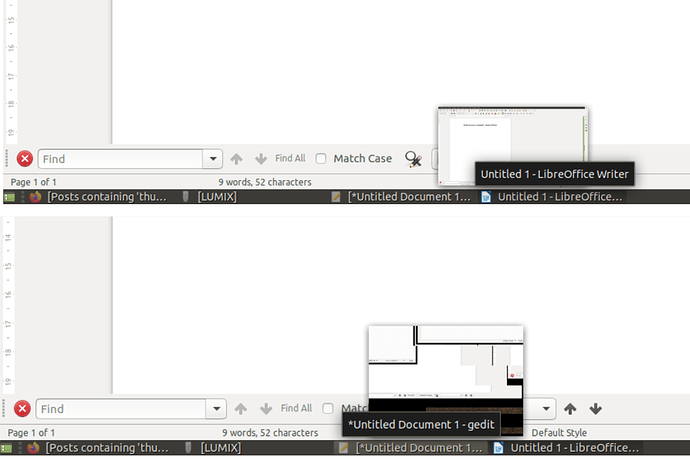 Right click on the kebab menu between the Show Desktop button and Firefox icon on your panel and select Preferences. You can configure the settings there. 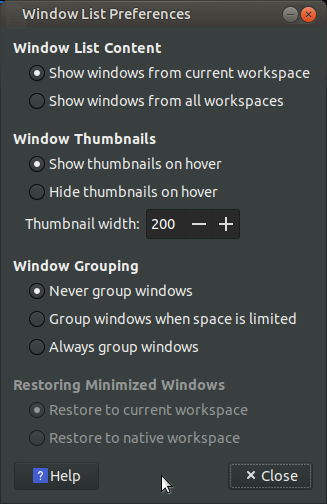 Many thanks for this quick response! Another PC that has been upgraded to 20.04 mate interestingly doesn't have the glitches with incorrect, inconsistent or distorted thumbnails. That works fine. And who upgraded it thinks it may be related to the fact that my machine is using Nvidia drivers and the other one is just nouveau display driver. Could Nvidia be related to the glitch?

Not sure weather this would count as answer to the original post, but the glitch thumbnails seems to be related to Nvidia drivers in my case. If I switch to Nouveau open source, while it doesn't work properly and I can only get a really low resolution, the glitches are gone. So I think these windows simply don't work reliably or consistently if you are using Nvidia drivers. In which case, it is better to do what I've just been told which is to disable them altogether, which I wanted in the first place. 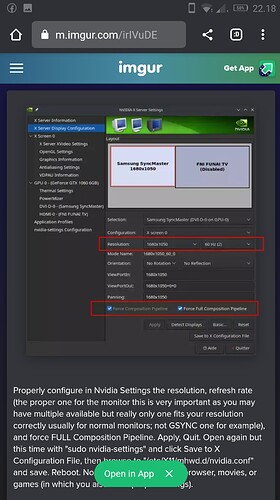