I'm looking for a dynamic label-- like the command-applet with no interval and with external access to content -- displaying text that I can set in response to state change rather than on a periodic schedule.

I'm not aware of a static text applet - but it does sounds like it could be a simple "hello world" applet written from scratch.

The Command Applet could still accomplish the task. For the command, start it with echo, and put any text you like. 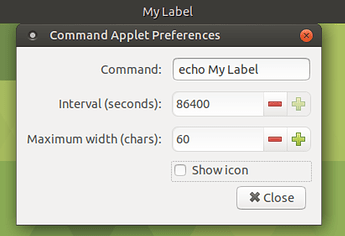 Setting the interval to a long time (86400 is the max) would prevent it from consuming resources.

Or... if you're looking to have your own dynamic label, you could write a bash script and rig it up to a command applet, getting context from other applications. and echo some text.

Or... a little more programmatically, have the Command Applet to read a text file and create a script that will overwrite that file by prompting for input - this can be accomplished using zenity and Bash's pipe syntax into a shell script:

(Saved to a file and marked as executable)

(Note that files written to /tmp will be discarded on reboot)