Hi, i've been reading if someone already had my problem and didn't found anything.
My wifi worked perfectly and suddenly after trying to set up something from the eth0 i think that i changed something from the wifi. Actually i don't know if it was me or if it was something different, because the wifi stopped working for windows to (i have an ubuntu Mate partition and a Win on the same disk). I tried reinstalling ubuntu and windows but it didn't worked. The only way i can have an internet connection is through ethernet.
Sometimes the connections tab shows:
-Wifi networks: 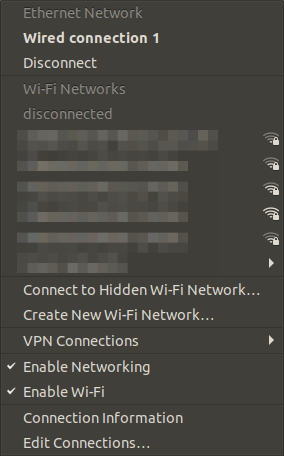 -And now: Wifi device not ready

In most posts people who wanted to help ask for:
http://paste.ubuntu.com/p/fwGWrCRB7z/

Thanks in advance for the help!
Want to carry my laptop with ubuntu mate and i cant because of this problem.

what version of UM are you using and is this a USB WiFi stick, have you tried using a different USB port if it is?.

See my answer to this poster -

Thx, i’ll post my problem there too with the file.

make sure you have everything up-to-date as well!:

Hi,
Yep, it’s fully up to date. Still not beeing able to use wifi.
Do you know what else can i do?
Thanks!

try the following to reset the network:

To reset the network settings under linux, make use of the following command: sudo /etc/init.d/networking restart

Hi @wolfman,
After restarting the network config and the notebook, nothing happened.
Thanks for your help. Still not knowing where the problem is.

try changing your software sources download location to somewhere else and updating again, I use the “Main Server” myself, if yours is set to your country, try changing it to “Main” per the update guide linked above!.

Thanks for the help.

all I have for you is to do a fresh install following this guide if you have a root and home partition:

Hi all, this guide can be used on any Ubuntu based system and is intended for people who have a basic working knowledge of an Ubuntu installation and wish to keep the contents of their home folder after doing a re-install. This guide is also intended for those that already have an existing swap, root and home partition setup!!. If you have not done/never done any pre-partitioning, please see this guide about using Gparted partition editor: See also: https://help.ubuntu.com/community…