I am so happy that Ubuntu Mate came out (as I missed that desktop since Unity one came out) and installed it since last October. The only real trouble I have is with the webcam. It has been working sometimes but mainly there are some grey/white/black lines moving from down to up and as I recently installed ubuntu Mate in another computer I have the webcam also working only time to time so I really love to resolve it as I need it for skype and google hangout meetings.
I did tried some ubuntu troubleshooting recomendations but without result.

The first thing i would do is to try anf get hold of another camera to test if the problem originates form a specific incompatability problem with your origional camera or a more general problem Ubuntu Mate is having with web cams per se.

for the record, I use both a proper webcam and also a sony ps3 eye toy as a webcam and both are working well. so, my guess it is a compatability problem that is specific to your particulart cam.

Hi Steve, thank you for your answer.
It has probably to do with some driver issue. I don’t have any external camera handy right now.
Is there a way to update the driver or install another version easily?

take a look here, it might be a codecs problem?:

hi wolfman,
I am not getting any new information from this page… I tried the normal ubuntu live cd 14.04 and get the same problem there. It was not with older versions with ubuntu, so I has probably to do with the new drivers. Is there a way I can uninstall and install an older version of the driver for the webcam?
Thank you

what you should do first is to make sure you have your software sources download location set to “Main” and that you also have “Canonical” marked, see the update guide (see below for link) about that!:

Now install the following via a terminal (Ctrl + Alt + t) (even if you don’t use Skype or the other packages are installed):

Then test your webcam with “Cheese”.

Ok, I did as you wrote and for one computer it did work but not for the other one. So I did format hard drive and isntall mate 14.04.2 as the other one and redo the whole procedure again but without success… The first computer when it didn’t work had at least the led next to the webcam going on, on this one or the cam does’nt work and the led stays off and when it works the led is on…
thank you for your help!

in both cases; your PC's only have 128MB GPU's which might be the cause of the problem as they simply aren't powerful enough to support the high framerates, maybe you can find a way of setting the framerate to its lowest setting?.

Open "Cheese" > Click on Cheese (at the top) > Preferences > Webcam > Video resolution and play around with the various settings: 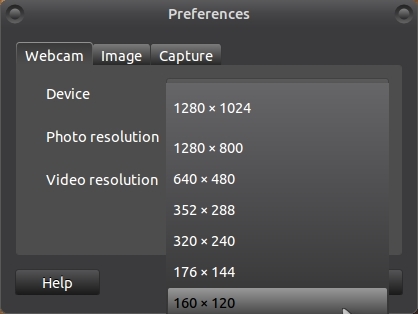 Are these your PC's?:

Dear Wolfman, thank you so much to take the time to help me.
Yes I did already play with the resolution with various programs but it did make no difference…

I think you might really need a much lighter version of Linux like Lubuntu or something similar?.

Lubuntu is a good operating system for many old computers, but not for all of them. Some computers have too little horsepower or memory. A rule of thumb is that the computer should not be more than 10 years old.

Processor (CPU): The minimum specification for CPU is Pentium 4 or Pentium M or AMD K8. Older processors are too slow and AMD K7 has problems with flash video.

Graphics chip / card: Nvidia, AMD/ATI/Radeon and Intel work out of the box, or the system can be tweaked to work fairly easily. You can get help at the Ubuntu Forums. With such graphics, or if you don't know, try the current Lubuntu version.

I am fiting the minimum requirements and even the recommended ones for one of the computers… I could try a lubuntu live usb stick to try out though. thank you for your help, I will probably have to find some external camera.

You could possibly install some more RAM in your PC’s, that might help!.

Thank you.
I did already installed 2G Ram instead of 1G in the small one and 1,5G in the big one instead of 512M.

Which one did you manage to get the webcam working on? Was it the one with more RAM? If it was, then is sounds like both of your machines are struggling due to being underpowered, but that one of them is just about managing the web cam due to the little bit of extra RAM.

If all of the above is the case, then I would definitely try going down the Lubuntu route, as suggested by Wolfman.

Further to what Steve said, did you do a USB install ? (I assume you did because you have a Netbook), if so; did you fully format the USB stick to FAT32 before installing your ISO on to it?.

Netbooks have an “Atom” CPU which is very misleading as they are generally very low powered and “Atom” in this case; is a misnomer which basically means you have an expensive paperweight in my opinion!.

It looks like that the problem was related to the hardware, probably a loose cable somewhere as some time the picture appears when I press the screen border where the webcam is…
Why is it so important to format the USB stick to FAT32 before installing ths ISO on it?
What are the risks of not doing so?

as far as I know, it is the standard for USB sticks but someone may correct me?, take a look here, its a long read but explains a lot about the subject at hand: