Name of the application:
Systemback

Systemback makes it easy to create backups of the system and the users configuration files. In case of problems you can easily restore the previous state of the system. There are extra features like system copying, system installation and Live system creation. 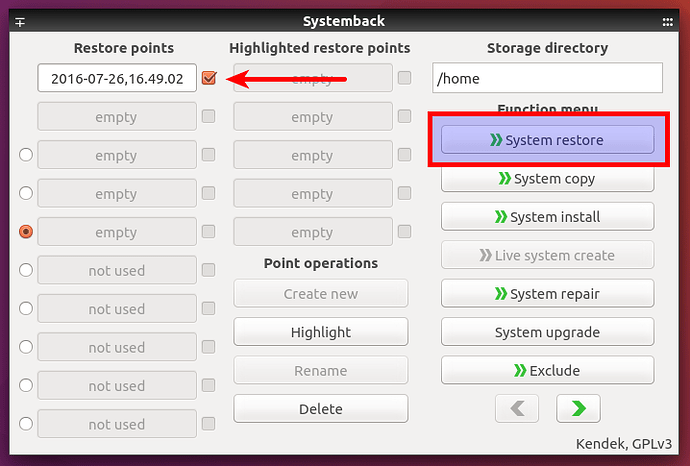 please consider this app for Welcome, this would be great for new users or advanced alike, here is a guide on how it works:

I'm looking at the screen shot, and reading it... i'm doing fine until i get over to the right side where all the action is, then... things get a little more confusing. "System upgrade"? What does that have to do with anything? And what do all those button labels really mean? Is there some tooltip for each one, or is it the usual "poke me and see"? I'm oldschool, i'm just not in line with the whole exploration-without-clues thang.

I'd offer an alternative but it won't run under Ubuntu-MATE yet, and it's imperfect anyway, but for something as critical as restoring or backing up a system, given the wide range of user knowledgability, i think anything offered as part of the MATE distro ought to be "butt stupid" so even i can use it.

Next time i've had to boot debian-jessie so i can do some backups conveniently i'll try to remember and capture a couple screenshots. Not to say "mine is better" just to offer another approach.

If it's time for linux distros to start offering something like this OOTB, it seems like we ought to do it right the first time if we can figure out what that means.

BTW and without threadjacking, what about BTRFS? Last time i looked was several years ago now, it looked like BTRFS had all the necessary stuff, lacking only a decent UI. For a distro-offered solution that might be worth considering too.

Was on debian a bit ago and captured some screenshots fwiw. 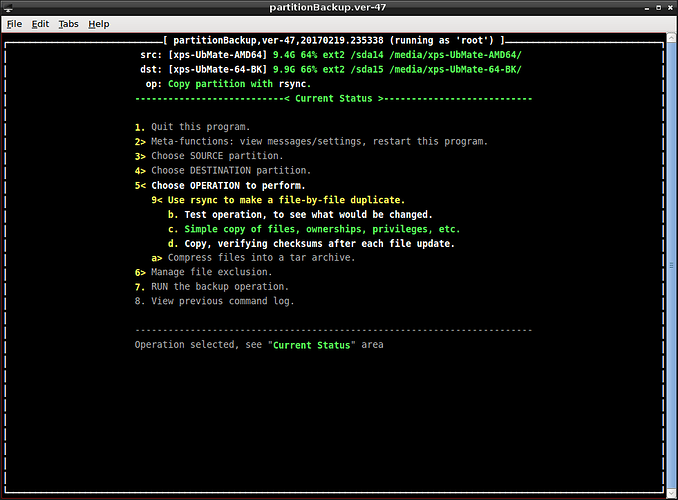 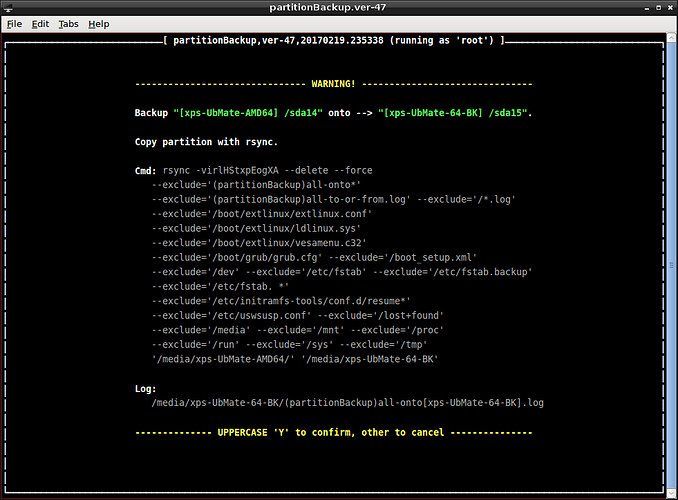 The second screenshot includes the rsync command that i use to back up a running system, fwiw. I have no recollection of what most of the rsync one-character options mean, but it's in the manpage somewhere.

What i'm trying to point out is that the two use different approaches. Systemback seems to take the Apple approach that the user is dumb and has no idea what any of it really does, and can be educated as to what "Update Stuff" might mean; the provider can then do whatever is easy behind the new labels to be learned by the user. OTOH partitionBackup assumes that the user knows exactly what he wants to do but doesn't care to type all the commands you have to remember to perform some basic function.

I have no clue whether that makes sense to anyone besides me, but i keep seeing the dumb-down-software approach coming out of gnome not because it makes it easier to use the computing tool, but because some end-user demographic has been educated to think things should be pictures you guess at.

Not really systemback basically walks you through the process, did you read the guide?

Yes i do use systemback everytime, usually the system copy function.
It is one of the most useful programs i think it must be added to Ubuntu Mate.
You can copy the system even in a external or internal smaller partition.

Thanks for the comment, waiting for a developer to give his opinon.

Lets see if we can get it in MATE

As good as Systemback is, I don’t think that it should be added as part of a MATE install. The developer’s ppa plainly states that development is suspended. See -

Yes i know the development have been suspended from Ubuntu 16.10, anyway i see it works at the moment on the last LTS releases.
So if someone can pick-it up to going-on with the development i think it will be a great idea.
It has a plain and simple GUI which everyone can understand, that’s what people like and linux OSes must be simples if they want to attract more users.

The development of this program has been suspended. It also has no declared support for 17.04.
I think that says it all about this ever coming to MATE as part of the Welcome or Software Boutique applications on this or any other distro with the words “stable release”.

Sorry, I don’t think we’ll see this in Boutique for the moment

It’s development has been suspended.

It could be a destructive…

It does look useful, so thanks for the suggestion. I’m not too sure I’d use it myself since from first impressions, I’m suspicious to what a “system repair” or “system install” actually does (some points that @crankypuss raised) without having to look at a guide/manual first.

It has a plain and simple GUI which everyone can understand, that’s what people like and linux OSes must be simples if they want to attract more users.

I disagree, it’s not something i can understand without more information about what the labels on the buttons do.

I do strongly agree that Ubuntu-MATE, in fact every linux distro, ought to have some basic backup capabilities that even a first-day user can figure out without learning a thing. Regardless of how far linux has advanced in the last few years, it’s still very important imo to keep a backup copy of your current system partition, because even after a few weeks almost anyone will have installed stuff and customized it and so on, and without a backup you’re liable to have to go through it all again if something goes bad.

I also disagree that it’s some driving goal to attract more users. I think it’s important for an OS to be rock solid, and that in the end it’s only quality that draws users. Let this distro please not get sucked into the numbers and forget its roots. I don’t think linux has ever been about taking over the world, i think it’s more about being free from the world.

They do exactly what is written in the tabs :


it looks very easy to me.

Anyway it’s a good procedure for people If they want to know how programs and OSes work, just use it in a plain VM machine, before to start to do in a real machine. There are some manuals in my language, but i have never read.

The past systemback packages has been tested on many different hardwares up to the stop.
A school-teacher produced many Ubuntu-Ubuntu Mate-Mint custom version by systemback, as well as the forum team and simple users.
Now, someone has gone to the pinguy-builder script, which is a remastersys fork.

Anyway, expecially new users does not understand ypu can reply your OS with dd or gparted, which need some adjustment. as for pinguy-builder.

And everything is destructive for new users if you don’t know how to manage it or how to repair an error.