I think you’re missing some key facts I tried to get to in my last post.

I only have 2 epub files to try which could be a big factor. I keep getting a single /tmp entry for each thumbnail.

In another folder I have six epub files. The file explosion occurs under the same circumstances, but most of the folders in the Atril-thumbnailer-xxxx folders are named either gnucash-guide.epubxxxx or gnucash-help.epubxxxx. A few of the other book titles are mixed in, but Atril seems to focus on these two.

From what you’re saying it would seem that this problem is specific to my computer. Synaptic tells me that all dependencies are satisfied and that there are no broken packages. Is there anything I might try reinstalling that might address this problem?

This is completely out-of-the-blue, but I recently tried to install google-webdesigner. I could never get it to work because of webdesigner’s issues with nvidia graphics adapters. I tried upgrading to the nvidia driver, but that completely crashed my system and I had to go back to the nouveau driver.

Is it possible that there could be some conflict between Atril and the nouveau driver (or the nvidia card)? Like I said, it’s just a wild, wild guess.

I located those two gnucash epubs and placed them in ~/ebooks
It did trigger an atril crash when I went to icon view in caja, but no file explosion: only two dirs and a few files were created: 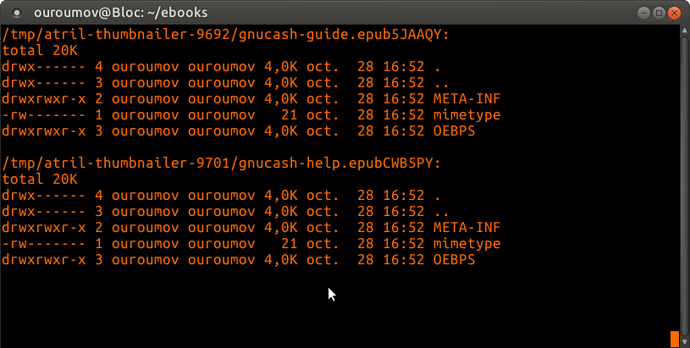 Also, while atril is supposed to provide the preview, I don't get an actual preview in caja

I get the same output as you on those two files, except atril will keep producing atril-thumbnailer-xxxx folders for them as long as the folder containing the files is open in Icon View.

I’ve also had a crash notice from atril, but I’m not sure what I was doing at the time. It just popped up.

Also, I don’t get an preview for an epub file either. I had thought this was what was throwing atril into a loop.

I ran a little test. I set my timer for 30 sec and went to the folder containing the six epub files. I switched from List View to Icon View and started the timer. When the timer went off I switched back to List View. In 30 sec., Atril created 105 Atril-thumbnailer-xxxx folders containing approx. 20,000 files totaling approx. 700 MB. Probably not very scientific, but should give an idea of what’s happening.

Jim, do you have a thumb drive handy? Or external or network drive of some kind? I want to see if getting out of your home directory changes things or continues that explosion.

Like @ouroumov, I did get that Atril crash a few times but it tended to be when I was moving or copying epub files. These crashes could be different symptoms of the same instability causing your explosion.

I’m thinking out loud here… Why would Caja / Atril repeatedly scan a directory for icons? Does it constantly think there are new files? Does it constantly think it just entered a new directory? Is Atril almost crashing so it starts over repeatedly? I wonder if a live boot would do same? Could it be a file corruption a reinstall would solve? Some unique setting in Caja or Atril trigger this? My head is spinning…

I do have a thumb drive onto which I’ve backed up my home folder using Unison. I just inserted it and went to a folder with the epub files. Had the same file explosion.

I used Synaptic to reinstall the four packages associated with Atril. Still got the same results so I haven’t mentioned it.

I don’t think that Atril is repeatedly scanning the directory. I think it is trying to build a thumbnail for the epub file. Something in the code is causing it to fail before it completes the task. Since it did not complete the task of building the thumbnail, it starts over again, and again, and again,…

I’m going to try a live boot session and see what happens. I’ll let you know.

LATER: I booted to a live session, went to a folder with an epub file. No file explosion!!! There was only one Atril-thumbnailer-xxxx folder created, which, I guess, is normal. Atril did however crash. I saved the crash report to my home folder and can include that if it might be helpful. Does this mean the problem might be with my install?

I have a Gigabyte motherboard, so if I have to reinstall I would like to get some suggestions/recommendations on BIOS settings beforehand.

STILL LATER: Here is an excerpt from the crash report. The entire report is 732 KB and almost 2000 lines, so probably to large to paste into here. The following lines are repeated over and over.

Jim, Half the battle of fixing a bug is reliably creating it and I’m striking out.

I’m not sure how far you want to go for a solution. Reinstalling may or may not help but live boot indicates it might.

Another option, short of reinstalling but not a trivial change, is install the Mate 1.14 PPA:

The number one question in the Ubuntu MATE community right now is: When can I get MATE Desktop 1.14 for Ubuntu MATE 16.04? The answer is, now. Right now. [image] We've published a PPA containing MATE 1.14 that is designed to work with Ubuntu MATE 16.04. You can find out what changed in MATE Desktop 1.14 from the upstream release announcement. You might be wondering why it has taken 2 months to release this PPA? Here's why; they've been well tested. The packages in this PPA are derive…


Again, this is a complete overhaul of Mate and takes a while to install. While this PPA is maintained by Ubuntu-Mate’s Project Leader, it’s also arguably unofficial. I run it, BTW.

@Jim007, can you reproduce the file explosion with a folder containing only those two gnucash epubs I previously mentioned?
I think it might be time to consider filing a bug report.
How though, I’m not sure. Maybe @monsta can advise us on what information is needed.
I’m fairly certain the root cause comes from atril-thumbnailer crashing.

Here’s a snippet of the crash report:

Note that I have the same unrecognized file format warnings near the end.

Quick workaround (at least it works for me):

Edit /usr/share/thumbnailers/atril.thumbnailer as root, move to the last line (which starts with MimeType=) and remove the last part of it - application/epub+zip;.
The line should end with application/vnd.ms-xpsdocument; after that.

I don’t know why atril-thumbnailer tries to process the same files over and over again though… I never experienced that.

Anyway, thumbnail creation code in Atril’s epub backend was doing the wrong thing from the start. Unfortunately, the original epub backend author doesn’t seem to have any desire to continue his work, and the rest of us need to figure out how to (re)write this code to do the right thing.

Thanks monsta!! That took care of it!

I’m fairly certain the root cause comes from atril-thumbnailer crashing.

I agree. I tried monsta’s suggestion and edited the atril.thumbnailer file. That took care of the problem.

Thanks Bill. I think I’ll wait until the next point release. Hopefully Desktop 1.14 will be included. I followed monsta’s recommendation and edited the atril.thumbnailer file. That took care of my problem.

Has anyone tried using “Bleachbit”?:

I use BleachBit on a regular basis and love it, but my problem was not how to get rid of the unnecessary files. My problem was that, if I left a folder open in Caja which contained an epub file, atril-thumbnailer would fill up my 60 GB / folder with thumbnails until I got an error message that I was out of space in that folder.

That’s a weird error message to get when you know that you supposedly have over 50 GB free. So, I’m glad you brought up BleachBit because, as the program warns you, don’t check on a box if you don’t know what you’re doing. I once cleaned out my ‘package lists’ and the Thunderbird ‘cache’. Not anything that couldn’t be downloaded again, but certainly a step that was completely unnecessary.

could you not blacklist atril-thumbnailer ?, I found this which might help you?:

Thanks Wolfman! I’ll give it a try if I have any further problems.
Thanks,
Jim

I’m addressing this to you because you suggested a reinstall and, I believe, that was at least part of the solution. To explain the entire solution, let me give you a little background:

I built my present computer from a kit about three years ago. I read all the pros and cons about different setups and tried to set up my computer in the best possible way. I set up UEFI or UEFI first in the BIOS and set up my harddrive partition table as gpt.

Over the past three years, I have periodically had system crashes and had to reinstall linux. The last crash occurred about a week ago after installing the latest security updates.

Before reinstalling the system, I made the following changes:

I’ll let you guys debate the merits of the changes I made, but, IMHO Ubuntu is designed to run on a msdos partition in legacy mode. While it can be run under UEFI on a gpt partition, that system introduces an inherent instability which will result in periodic unexplainable crashes.

Well, I know I’ve thrown out a can of worms. I’m interested in hearing you guy’s thoughts.

LATER: After responding to another post on a different subject, I went to Caja Preferences. On the Preview tab, I changed Text Files to Never. This has solved my problem of Atril crashing and NO Atril-thumbnailer-xxxx folders are being put in the tmp folder.

I would do exactly as you did but legacy boot and partitions are what I’m more familiar. It’s likely just a “Luddite factor”.

I would guess the Legacy/MSDOS condition is not responsible for the Atril explosions but it certainly isn’t impossible. I’m glad it’s working more normally for you, now. Thanks for the update.

My first computer had 256k of RAM and ran DOS 3.2. There were no such things as “drivers” to make the hardware work. You just plugged it in and it worked. The computers of today would not exist if technology had not advanced beyond the hardware standard of compatibility, but it certainly makes it much harder to know what will work and what won’t. It creates problems, sometimes, for which there is no answer and mysteries which will never be solved!!