Yaru I hate you

: I have found this web

But I don't know how to load these desktop themes to my Ubuntu 22.04

Does anyone know? Thanks a lot in advance

download them, unzip them and put them in you .themes folder, however they do not all have the correct components to work always, also they have to be gtk 3 themes, gnome shell themes do nothing in mate

So then nothing to do until Mate Desktop adds some awesome theme again. Thank you

So then nothing to do unless Mate desktop add some awesome theme. Thabks

The Mate themes should be there in the official repository, separate from the Yaru themes, just install them with Synaptic or the command line. No need to unzip or move, they go right where they belong. 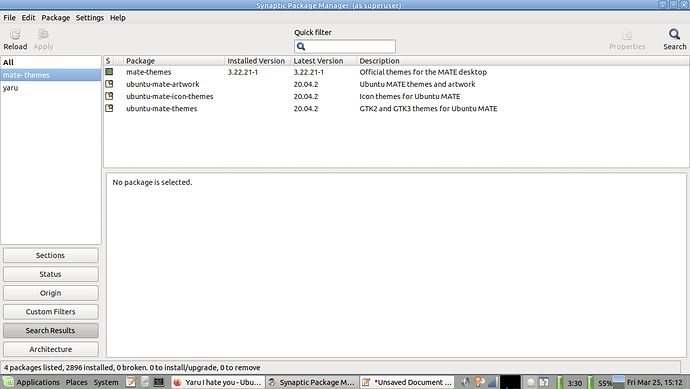 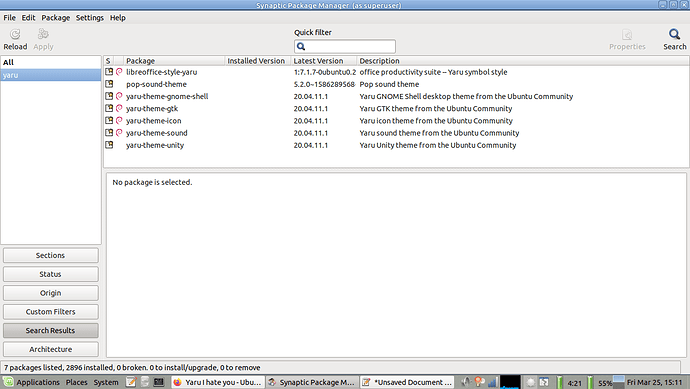 This package contains the official desktop themes of the MATE desktop
environment.

The themes provided for the MATE desktop partially resemble themes that
are well known from GNOMEv2 desktops. However, the MATE team also prepared
some new themes esp. for MATE (Menta, GreenLaguna, TraditionalGreen,
TraditionalOk, and BlackMate).

Thank you Jymm. Firstly I could not get them because synaptic makes case sensitive and I ommited to put an "s" at the end of theme. Now I have them installed personally traidicional look is the most acceptable. Thank u for your help

For any one stumbling across this topic and want Ambiant-MATE and Radiant-MATE themes for 22.04 -- they have a new home here:

And regarding the colour themes:

Project Announcement Starting in Ubuntu MATE 22.04 LTS, Ambiant-MATE and Radiant-MATE is no longer included. The theme hasn't been touched in 2 years, and the team announced its deprecation some ti...

Ambiant-MATE and Radiant-MATE themes for 22.04 -- they have a new home here

Looks good. I have just installed packages from your PPA to freshly installed Ubuntu MATE 22.04 LTS daily build by using below comands:

Now the system looks traditional and cool! Thank you!
Retrospective future is back!

Thank you. I had already solved as I clone entire disk and save cloned files I can switch fom 20.04 to 22.04 many times a day so yesterday I copied usr/share/themes and usr/share/icons from the 20.04 to a secondary hdd. Anter restoring 22.04 I copied content of both folders and I have now Ambiant Mate again.

Do you harte yaru?
Took a fresh yaru and modded it, like i had done it with yarok and yarugreen from mate themes.

I am not that often on github.
Need some days-/ hours for panel and full gtk2 look but once panel is done i can send it to you.
Schould run as well as the original gtk2 while being faster and easier to maintain. If gtk4 supports theming again it could be ported directly!