Adding subfolders to the places menu

Hello I am wondering if there is away to add subfolders to the places menu such as the recent documents on this same menu. any help would be appreciated thank ypu

I want to explore the contents of the folder from the menu. look at the recent documents item to see what i mean thei picture might help i have added folders with control d 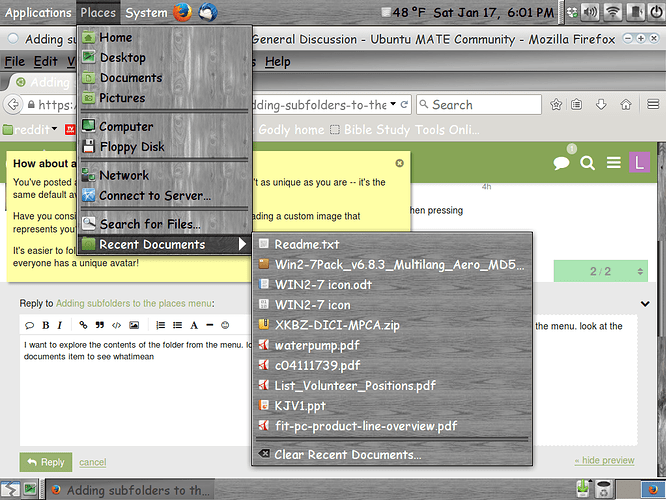 Do you mean “expanding menus”?

Alas, I’m likely to be of little help; but am interested in the solution, if there is one.

It's one of the few things I miss from Redmond

What would be the dynamics of this? I haven't used Windows for many years now and thus can't remember exactly how Start menu folders worked.

On the one hand, I would think that, in general, MATE users prefer the old GNOME 2 behavior where you'd click on a folder in the Places menu and the file manager would open up to that folder. That is the old behavior they learned to work with and many users want anything but change. On the other hand, hovering over a Places menu entry would display a submenu which contains a list of other folders and maybe even files in the hovered-over folder.

Ah, I may have answered my own question. I suppose hovering over a Places menu item could display the contents of the folder in a submenu, but clicking on the menu item itself could launch the file manager. (Normally, when one clicks on a menu item with an associated submenu, clicking toggles the display of the submenu, either showing or hiding the submenu.)

I can see however that some of us don't like menus / windows popping up over other things on the screen, so I think like the window thumbnails in the MATE Panel Window List applet, this feature should be an option. Ideally, IMHO, it should be turned off by default -- although if Ubuntu MATE wants to turn it on by default on their own distro, then that's fine and dandy. But I cannot see a core MATE developer setting this as a default, honestly.

I ask this question because it's possible this could actually be coded given the constraints of GTK, the library which all MATE applications use for the user interface components. Am I saying that I would necessarily jump on this immediately? No, since this may be a bit tricky to get right. But I know this could be done, and I know I could do it if I put my mind to it.

I could be wrong, but ISTM he's asking for a tree-capable "Places". Even if limited to depth=1, it would still be a meaningful improvement for some use cases. (e.g. Personal, Financial, etc as folders under Documents; etc).

The Windows Start Menu has never had anything like that capability though, so I suspect at least one person in this thread is confused, and it's probably me.

This, I think, is a weak argument starting from a false premise. If a user clicks something, that "something" has focus (in both meanings) and is absolutely justified in doing whatever makes most sense for it as the response to that click. If that means a cascading tree of menus then that's what it should do. People don't object to popups that are specifically serving the function they explicitly just asked for, only to ones that they DIDN'T ask for that interrupt their flow.

GTG, but - Gordon, I'd suggest that rather than try to tackle a nebulous request, you instead consider what your "ideal" behavior for this case would be, with that in the background. If you're going to change something - especially when there will be numerous valid objections TO such changes (and probably a larger number of less valid objections :P) - you should be aiming for "the best that you can think of", regardless of whether or not it addresses the OP's request.

"The Windows Start Menu has never had anything like that capability"

It does, or at least it did.

There is an application called "Windows Classic Shell" which you can install on later versions of Windows to restore the old functionality. The expanding Documents and "Favorite" [= Redmond's term for Internet bookmarks] menus are particularly useful.

Meanwhile back in Ubuntu MATE, clocking the subfolders of Home as Caja Bookmarks results in a very basic expanding menu system.