I installed Algodoo v2.1.0 with Wine, and when I run it, this error message appears: 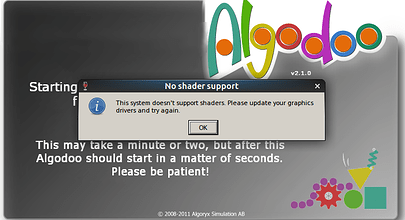 1) Shaders - term used for computer graphics for shading by applying levels of colour within an image, or to produce special effects or video post-processing, like a motion blur.

2) That could be the case, it depends on the system requirements of the game. It could alternately be Wine failing to detect the hardware’s capabilities.

But looking up your graphics card, it says:

So, there is a chance the hardware doesn’t support it. Have you used this software on Windows on the same machine before?

I found this where another user concluded the software is just broken on newer versions of Windows, so the software itself may be at fault.

3) Being an ATI card, AMD may have their own proprietary drivers. By default, Ubuntu MATE will use the open source drivers. You can check this under System → Preferences → Hardware → Additional Drivers. Being an old card, their drivers can be worst off then the open source ones, so please do backup beforehand.

To test OpenGL, you can type this into the terminal:

Running glxgears seems to work fine. What does this do?

glxgears is just testing OpenGL. If it failed to load, then that would indicate a 3D driver issue or unsupported hardware.

Arch sums it up nicely.

Complete command with Algoddo to run on terminal:

Change MY_USER per your username.