Bash interesting shortcuts and others

cd without argument takes you to your home directory :

the ~ represents your home directory, use it if you are working on machines you don't have the regular user name :

^old^new will replace the word 'old' by the word 'new' in your previous command, and run it again :

You are asking yourself why this ids are present in front of all your commands once you run the history command ?

image734×240 92.2 KB
Its one of the most importent bash feature !
(we are calling it bang)
in order to run one of the commands you already have run and has a ID, run the commandID with ! at the beggining :

Run faster typing your command :
Pressing Ctrl at the same time than your are moving with left and right arrow, you will jump to the previous word :

Lazy to make ctrl + A when you forgot a prefix of your command, no worries, the bash is with you !
run a command with !! (bang bang) in front will prefix the command with this additional word :

Auto completion is the most powerfull tool you have in your hands.
start writing your command and next start bombarding with tab key will most probably make you win a lot of time ! 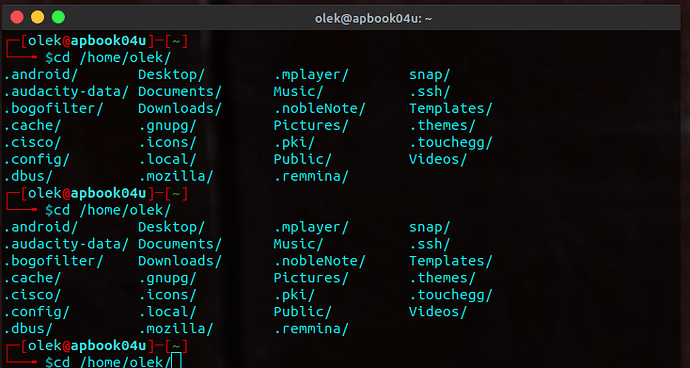 Inverted line order inside a file ? cat command have a good friend that works a bit different : tac

the yes command will automaticly answer yes to all questions in a command :

Edit : I found this interesting post about auto completion :

Command Tab Completion You May Be Unaware Tips & Tricks

I don’t know when it started since I found this by accident several years ago. Command completion has been taken to extremes in a lot of common terminal applications. I find the best way to find them is just test it out on a command and see what you get. A good example is the apt command. Here’s how it goes… Just type this. You must have a space following apt: [email protected]:~$ sudo apt Now, press the Tab key twice and viola!.. [email protected]:~$ sudo apt (press Tab Tab here) autoclean clean …

I like Ctrl + l to clear and Ctrl + d to close terminal.