All the flavors on this page receive a few nice words. Except for Mate, where a statement about Ubuntu is instead made. Were the only ones with a date (year), this makes Mate sound dated out of the box. Is Canonical bashing Mate?

Good question. Their description of MATE is exactly what they say, carrying on the desktop spirit from Ubuntu 10.10… they could’ve said it’s simple, light and functional, but they may not want people to run away from Unity saying that.

I could just be reading too much into it. Thats why I came here to see what the community thought. If its a bug, it needs to be squashed

Sounds okay to me!.

It isn’t knocking Mate but merely giving a very brief description of what it is, someone new to Ubuntu would most likely overlook the remarks?.

Thanks for the input wolfman.

At least “Classic desktop environment” sounds good to me, it sounds like “timeless”, “traditional”, “standard”,…

Maybe my tone, since coming aboard makes it clear, enough, that I highly value the OS of UM, in tandem, with its community. After months of virgin distro-hopping, I can testify that the UM OS/environment is better in every way - for both production and leisure (or, with all of the Linux/BSD choices, I would have been long-gone); but, on top of that, the community furthers UM on to becoming an indispensable treasure for the lost newbie, and on up the ladder to the gurus. It is no secret that we boast the machine for grownups, and regardless of how old our roots are, we end up providing something, unmistakably, akin to the traditional OS X experience - and its hard to go wrong there

My profile explains that I went through a half dozen Linux OS’s before serendipitously falling upon UM - and I have now stayed with UM longer than all of the others, combined - so that’s how things really play out with a typical Ubuntu MATE experience - and that is what the bulk of the reviews, moreover, maintain.

"For a retrospective future" are, indeed, the very first words to follow the actual Ubuntu MATE title, when someone clicks our link, there; whereas, "A community developed Ubuntu based operating system that beautifully integrates the MATE desktop" - the, understated, true reality of UM - comes after… that preempting is kind-of on us

I really do feel that Canonical, and the rest of those “latest & greatest” kind of fair-weather folks, who criticize the tried & true things of life - calling them obsolete, etc, (GNOME 2) were wholly caught off-guard by our mushrooming success. I took as long I did to jump aboard, due to the fact that - until the greatness, had a chance to play out, with UM, the lions share of Googling, came up with junk like " Don’t get too exited, MATE - the fork of a dead GNOME 2 - means MATE will, likewise, be DOA"… and, of course, they were very-very wrong

I get a little miffed when an unfair, or deluded, review comes out on us - because we are all Ubuntu MATE, here; but they are becoming, increasingly rare. We are, progressively becoming the unexpected benchmark OS, @anon42388993, and I am no longer seeing the naysayers on the newer articles - not with our version of MATE, anyway - pretty much just praise now. At least they have quit, exclusively, calling us merely the go-to OS for mothballed legacy HW

I think Xubuntu will continue to be the “caught in-the-middle” OS, which gets, routinely, punked-out - it has, perhaps, even less relevance now that UMATE has proven itself so well. Their tag is worse than ours: "provides a light, stable and configurable desktop environment with conservative workflows" bad-bad-bad - poor Xubuntu

Don’t forget that Mate is still the new kid on the block, once the news gets out and spreads, I think a lot of people will turn to UM as their preferred distro, a lot of people chose Linux Mint over Ubuntu, I myself used PinguyOS and ZorinOS for a long time, I will now stick with UM because of the G2 DE which is what I prefer!.

Give it another year and I think that UM will be in the top ten distro lists!.

Canonical have done something new. They’ve made it much easier to find the flavour-dowloads on their website. That’s good news.

There is little space to describe the different flavours. The person who wrote these descriptions may never have used any of them. So there may be room for certain improvements. That’s alright. Remember that this is “version one”.

I would hope that Canonical would accept suggestions for modifications to the descriptions from the makers of the different flavours. That would be a friendly thing to do.

So let’s wait for “version 2”, and continue to tell all those who ask us personally, exactly how good Ubuntu-Mate is (remember to offer to install it for them).

I was wondering about exactly the same issue when I first read through the short descriptions of the Ubuntu flavours page. For some reason I have not gotten around to start a new thread and now by chance came across this one here.

So this is what the Ubuntu flavours website states about Ubuntu MATE:

Ubuntu MATE expresses the simplicity of a classic desktop environment. MATE is the continuation of the GNOME 2 desktop which was Ubuntu's default desktop until October 2010.

My initial thoughts were that similar to @mated in that it does not present UM in the best possible light and may even create a negative impression. But it is valuable for providing a snapshot into how the distro is viewed from an outside perspective and what remains to be done, communication-wise, branding-wise and marketing-wise, to condense the features and advantages of UM to a short and precise message.

What are your suggestions for a two-sentence introduction to the UM world? What would you like to read? 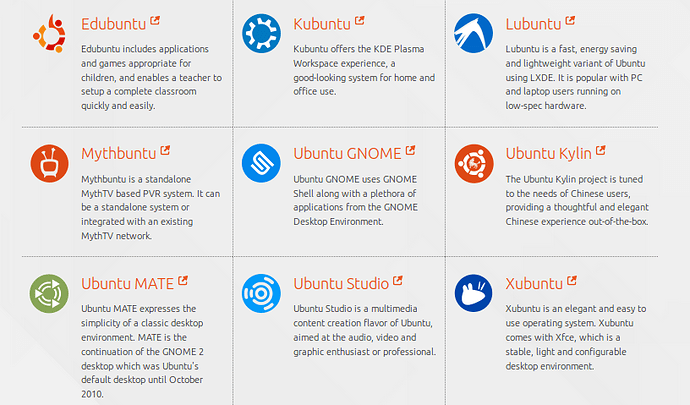 When read alone I understand some folks might interpret this as less than a full endorsement … however taking into account the lead in presents a different meaning.

Ubuntu flavours offer a unique way to experience Ubuntu, each with their own choice of default applications and settings. Ubuntu flavours are backed by the full Ubuntu archive for packages and updates.

Each of the descriptions are short so I don’t think any OS is getting better coverage than the next!.

I echo @anon42388993. The second sentence should not contain any date. Anyone who is interested in the history of the MATE desktop environment can read about it elsewhere. Instead the Software Boutique and the suitability for beginners deserve to be mentioned.

Half full / half empty

One can easily assume that Ubuntu is reacting to “traditionalists” by updating the kernel and providing a DE that folks have requested.

Is there really a compelling reason to use Xubuntu anymore? I feel like that distro got shafted more harder than Ubuntu MATE did.

That, and the devs for Xfce could had made what ended up becoming MATE and succeeded in making an equally-capable GNOME 2 replacement, but that never came to fruition, hence why MATE exists.