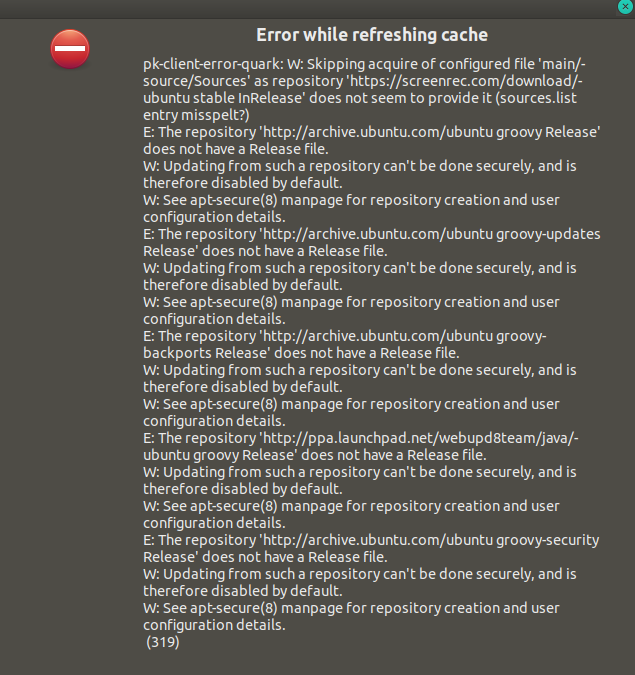 Please open the text file /etc/apt/sources.list. Copy the entire contents of that file onto the clipboard, paste it into a post here, re-select the text in the post here, and then click the </> icon right above the post textbox.

This will allow us to see what is wrong. Thank you in advance.

@Yan Ubuntu 20.10, along with all flavors like Ubuntu-MATE reached EOL some time ago.

After a release reaches EOL, it's repositories are moved, meaning the "does not have a Release file" error occurs.

Your issue is you're trying to upgrade a no-longer supported release. You can change the repository to point to it's moved location (there is no automatic tool to do this, it's manual, as you're supposed to release-upgrade to the next release before it's reached EOL thus this issue should not occur). To do this you can refer to EOLUpgrades - Community Help Wiki

Do note: your release-upgrade will also be harder too, as Ubuntu-MATE 20.10 would release-upgrade to 21.04; however that release reached it's EOL only days ago; thus that upgrade is gone.

It maybe easier to upgrade via re-install a supported release. I'd also suggest sticking to LTS or long-term-support release if you don't like release-upgrading every 6-9 months.

@guiverc (above) is right; Ubuntu 20.10 "Groovy Gorilla" is out of support. Please see his post directly above your last post.