I recently made a clean install of ubuntuMATE 20.04 on my computer and everything was working fine.

However, yesterday I opened the Gnome software program to browse some applications. The first time it opened as expected, but from the second time on, whenever I click the icon on the menu the program only appears on the lower panel and after 10 seconds it disappears, as if it was trying to open but failed. Curiously, when I run gnome-software from the boutique or from the terminal, it works, but when I do so from the menu it doesn't.

I tried reinstalling it from both the terminal and the software boutique and rebooting, but it shows the same bad behavior as before. It may be useful to include a picture of the output gnome-software shows when run from the terminal: 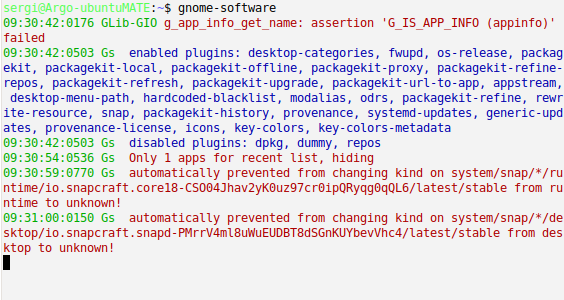 Also, I checked the command on the menu used to open this program and it shows "gnome-software %U". I don't know the meaning of %U, but I tried to run it without it by editing the menu and nothing changed, so I restored it as it was.

Edit:
As requested here are the last contents of my .xession-errors file:

Most of its content is this repeated several time.

Please post the contents of your .xsession-errors file. This file is located in your home directory. It is a hidden file so to view it you must instruct your file manager to show hidden files. In Caja -- the MATE file manager (probably no news to you) -- press Ctrl-H.