If I have a radeon hd 4350 and it works out of the box on the normal installation of ubuntu, is there are risk to installing the radeon catalyst drivers?

I'm looking to buy a better graphics card, not because this card I have doesn't meet my needs, it does, it has some strange high pitched whistling going on and the sound changes when I drag a website up and down so its clearly coming from graphics related devices. The card runs with a heatsink and not a fan so its puzzling. I had a nvidea card however I had issues when it was running so used radeon instead.

Coming back to the above query, If I buy a better card one which sadly has a fan I will need to install catalyst so thought I might get some practice in. Thanks in advance.

Hi,
You don't need to install drivers for your card, they're already in the kernel.

Coil whine is a thing with some GPUs and nothing to be afraid of. You won't kill your GPU by browsing the web.

What about the new card? I don't want noise because I want a silent pc. Would the kernel control the fan speed? I generally use my computer for web surfing and watching youtube videos, no gaming so the card should not get a high load. 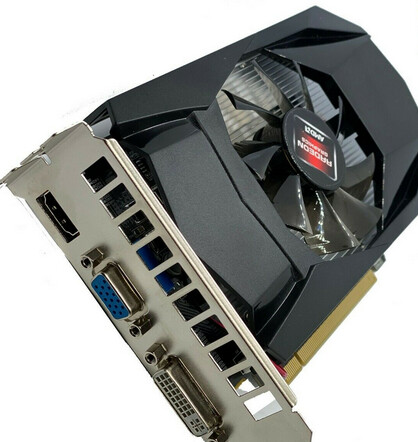 Same for the new card.
Fan speed should automatically be taken care of.
Should you want to fine tune the card, there's a utility called CoreCtrl.

OK thanks, I read someone write up a description to install it but it looked a little complicated so I wanted to see if I could avoid the hassle.

Something I find interesting while searching ebay, is that Radeon appears to be a small proportion of results.

Anyway, I also get a high pitched hiss from the computer upon entry of certain usb slots with usb memory chips. I have never seen this phenomena in previous computers, is there any kind of manipulation available of the power/current of these usb or pci devices which might possibly affect their pitch?

There are several reasons for that.

They're great GPUs (especially for Linux with the open source drivers) but gamers tend to stay with Nvidia at the moment due to (meme?) features like Raytracing (worse on AMD cards) or DLSS ( AMD's working on a similar feature) and bad reputation is hard to get rid of.

As for your coil whine issues, I don't know of any way to change the pitch.

As it happens I found the source of the hiss, it was usb related. My keyboard is usb and goes into a little usb to pin adapter for the old style keyboard pins. When I plugged it straight to use the hiss stopped. However the computer then had bizarre booting issues and wouldnt boot up. After I put the original setup with the pin adapater I then got normal use of the computer after a few reboots. I'm going to wiggle the cables a bit for the ssd and see if that is the source of the problem. the biios could see the ssd and the hdd however it just wouldnt boot the boot loader.

What you are describing sounds like a power supply problem to me. As the power load changes, some component in the power supply is making noise and changing pitch.

OK well the hissing has got a lot better since I worked out I can shuffle the usb devices around and I am still using the keyboard directly to usb rather tha the pin adapter. I now have a much stranger issue in Windows, whilst I realise this is not a windows forum, wonder if the knowledge of linux software can help my windows problem.

OK so I installed a new graphics card which my nephew had, its a Asus Radeon HD7750 1GD5 V2. It works perfectly fine in ubuntu 20.04 and the linux install runs both my pc monitor and the tv as duplicate screens fine.

the card showing output to the monitor via DVI cable and the TV via a HDMI cable, during boot up of windows 10 the TV turns blank stating no video available and I cannot see where I am going wrong here. The monitor is apparently seen by the software from asus which I downloaded the correct drivers for this card Asus Radeon HD7750 1GD5 V2 as you can see in the print screen as display 1 32w LCD TV and it obviously too sees its connection via the HDMI so why isn't it using it?

The computer boots and shows the initial bios loader on both screens but it just turns off the monitor during startup of windows 10. Now heres the weird thing, in windows I can extend the display to both screens fine, however if I go to duplicate it wont work at all. Do you think whomever made the software for linux drivers for this card made some for windows users too? Now I tried using an old monitor which is vga instead of the dvi by using a dvi canle to vga adapter and this meant I could see duplicate desktops however this then created a whole new problem. The windows software will only let you duplicate the screen by using the same resolution on both, where as in linux I can have different resolutions. This meant new problem of I either get full screen on the smaller monitor and a shrunken desktop on the larger tv or I get at another resolution a full tv screen but with a reduced screen on the smaller monitor.