With the next release can you please simplify home networking. Make it user friendly also. Also have it configure out of the box. I think this would attract more people to Ubuntu Mate.

Well, file sharing starts by installing caja-share from the Software Boutique (or Welcome → Getting Started → Optional Tasks) since it’s not pre-installed by default.

What sort of simplicity did you have in mind?

Caja-shara doesn’t work on my computer. I have tried many different tutorials an nothing seems to work. My guess would be pre-installed and configured so that away at least a user can share files via one folder from out of the box. An then configure if they need a different set up.

I pretty sure he means like on Windows, where most of us are escaping from, it’s plain hard on Ubuntu, no matter what your computer savvy level is…

That a what I’m saying except I hate Windows. An this is my only compliant about this is. Other then that I love it.

I just tried setting it up in 2 virtual machines. I can see your point, it doesn't show up in Browse Network. I haven't found this page to be very reliable for discovering other computers.

It does work perfectly well connecting directly to the machine's IP address. By pressing CTRL + L then typing:

You could bookmark that for easier access. IP information can be found here from the applet: 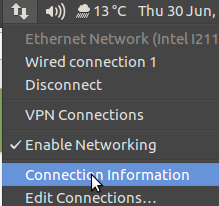 I don't actually use Samba, but instead connect to the whole file system using ssh:

Understand completely, it has been a struggle for me also, just settled on bookmarking to create shares…

Have a great day… unless you’ve made other plans !

Tried that with ssh and all my cursor does is spin. I’m wondering if it is not my router causing the problem.

If both machines are in your LAN, the router should not pose a problem.
Maybe you’ve activated the Firewall on the machine with the shares?

Edit: you also have to install OpenSSH server for it to work:
Software Boutique -> Servers -> OpenSSH

Thank you lah7 and ouroumov your the only ones that have been helpful!!! Instead of samba why not use openssh way easier to work with an actually works!!!

AFAIK samba is the only way to get some compatibility with user’s Windows machines.

Another tip for SSH (technically SFTP) - the application FileZilla (in the Software Boutique) is brilliant for bulk transfers and sending large files, especially if the connection drops out.

You can install this on Windows too, so it’s possible to transfer files via SSH/SFTP via Windows if need be.

What sort of simplicity did you have in mind?

Windows easy network setup is a hint. And, I agree with

I think this would attract more people to Ubuntu Mate.

I would like to communicate Mate/Win7 and from Windoze side, it's easy, but Ubuntu/Mate network setup requires a good understanding of the Linux geekanese, access to a Linux dictionary as well as to a list of Acronym explanations, and finding a version of Mate that actually has some of the things instructions tell us we're supposed to Run, or Open.

Even now, 3 years later, noobs to Ubuntu/Mate/ can wallow for a long time. For me, I just spent 4 hours reading documents online and found many just plagiarized someone else's original ancient mistakes. It's why we sometimes ask the same question hoping for a correct answer.

If Ubuntu made installing the software as easy or at least half as easy as opening a new comp with Windows, Ubuntu would rule the world, but not everyone is a Linux hobbyist, and has the time for a whole new very long and complex learning curve. Just something to consider from another hoping for a modicum of simplicity.