How to Install and setup mpd + mpdscribble + ncmpcpp

This tutorial will guide you through the steps necessary to install mpd+ncmpcpp+mpdscribble on your Ubuntu-MATE 16.04 machine. The result is a fully functional (and fun to use) music playing environment for the console, capable of managing your music collection and playlists, complete with a tag editor and scrobbling features.

All of this with only a minimal amount of resources needed: 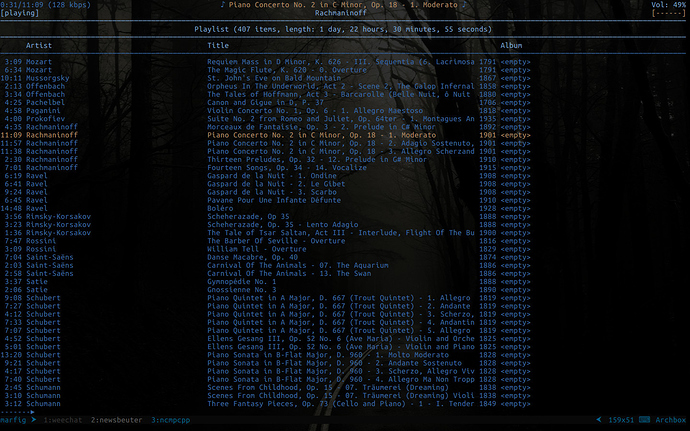 Tips and Tricks (or the joys of mpd)

In these replies to the tutorial, I'll be adding a few bits and pieces of information to help you get the most of the mpd daemon and ncmpcpp.

One of the first things that may catch some users off guard is the fact that once they start using the mpd daemon with any of the console players (like ncmpcpp), their keyboard media keys do not work. ncmpcpp bindings configuration file does not understand these keys or their key codes, either. And neither it offers any command line options to control playback that we could bind to the Keyboard Shortcuts application that comes with most Desktop Environment like MATE.

Seems hopeless, but it is not.

mpc is a command line-only client to the mpd daemon. It can control all aspects of music playback and it is ideal for our purposes. It's small, simple and fast.

ncmpcpp gets all its playback information from to the mpd daemon. So, if we tell mpd to start playing a song with a command like mpc play, ncmpcpp will be informed too and update itself accordingly. It's a beautiful combination between mpd, mpc and ncmpcpp. And its is one of the reasons why music daemons are so great.

###2. Get to know the mpc playback commands
If you read mpc documentation (man mpc), you'll get all information you need to learn how to control music playback. But here are the relevant mpc commands we will be using:

In the window that opens you may already see the above keys configured to some other application; usually vlc or some other GUI music client.

The next operation will remove your default media keys configuration from the Keyboards Shortcuts and assign them to a new client. It's the price you pay; Ubuntu-MATE Keyboard Shortcuts doesn't allow you to assign the same key to different applications. So, if you don't want this to happen, stop now. But who needs another music client when you already have the best one in the whole world, ncmpcpp? If you agree, press on! 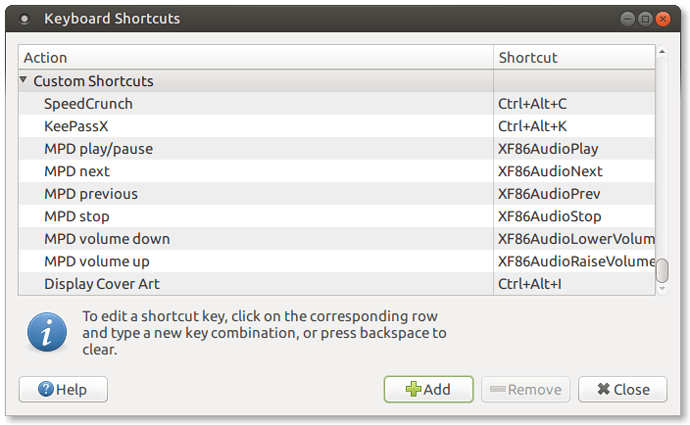 4.1. Add a new action
You just need to click the '+Add' button to add a new action that will be inserted to the end of the list under the Custom Shortcuts dropdown.

On the "name" field type something meaningful, like "MPD play/pause", or "MPD Toggle".
On the "command" field type the actual command to be issued. On this case, mpc toggle

4.3. Add the shortcut
Once you apply, the action will be added to your custom shortcuts list and you just need to now assign it a new shortcut.

This is as simple as clicking your new action under the Shortcut column. You'll see the text changes to New Shortcut.... Now hit the Play/Pause media key on your keyboard. And voilá!

4.4 The Volume shortcuts
The actual mpc command to control music volume is:

I trust you will not have any problems setting the rest of your keyboard configurations for music playback. Enjoy!

Tips and Tricks (or the joys of mpd)

In these replies to the tutorial, I’ll be adding a few bits and pieces of information to help you get the most of the mpd daemon and ncmpcpp.

The Ubuntu-MATE terminal, like all terminal emulators, cannot display images like the high-definition album cover art that many of us like to store with our music collection. So it is not possible for these image files to be displayed on the terminal. However, we can do it on eom (Eye of MATE) or any other Image Viewer you have installed on Ubuntu-MATE, like feh or eog.

In here I show you how you can display the current song album art in your image viewer. Essentially we are going to create a script that calls the image viewer and the bind it to a keyboard shortcut.

mpc is a command line-only client to the mpd daemon. It’s small, simple and fast. It can also gather information from the currently playing song, something that ncmpcpp won’t do on the command line. Our script will make use of mpc to get the current song directory.

If you haven’t installed mpc on the previous post, do it now with:

###2. Create a script that takes care of calling the image viewer to display the image files in the same directory as the song currently playing.

The way I dealt with this was creating a script that calls an image viewer (by default, Eye of MATE) and displays any image files on the current song directory.

You can get the mpdcover bash script from this project page, along with its man page (instructions for installation are on the project Wiki). Alternatively, you can just copy/paste it from the code below.

###3. Copy the script to a suitable location and make it executable

You will want to place the script on ~/bin if you wish for only you to have access to it, or on /usr/local/bin, if you wish for all users of this computer to be able to use it. I have mine installed on the latter directory.

Then you need to make it executable. If you placed it on ~/bin, you only need to:

If instead you placed it on ~/usr/local/bin, then:

To test the script you should now run ncmpcpp and start a song. The mpdcover script needs to be told where your music collection root directory is located. By default it assumes it’s located at ~/Music.

The following will start mpdcover with Eye of MATE (eom) as the image viewer and will assume your music collection is located at ~/Music:

The following with tell mpdcover the music collection is located at /media/marfig/Musicpen/:

If you use a different image viewer, just run mpdcover with the -i option. For instance, if you wish to use feh, just type mpdcover -i feh. You can also pass command line options to the image viewer with the -o option. See the script manual page if you installed it from the project page I linked above. If instead you just copied/paste it, you can read the script documentation here.

Note: The image viewer will only show if there is a song playing or paused. If the player is stopped, or the mpd daemon is not running, mpdcover will not launch the image viewer.

###5. Create a keyboard shortcut to call the script.

Instead of calling the script manually, we can just create a keyboard shortcut that helps us avoid having to start a terminal. It’s much more convenient.

Follow the instructions on the previous post on how to create terminal shortcuts on Ubuntu-MATE. I personally use CTRL+ALT+I to call the mpdcover script.

Well 6 years later here I am still(!) referring to your tutorial which stood pretty well over the time.
So kudos and thank you for that!

If I may, I would have suggestions:

Now on to the original reason of why I am posting this is that, for me, mpd never worked natively on any of my UM systems and always spewed back le "status=17".

Since today was a Saturday of a waning moon then I thought impressively that this would be the perfect moment of glory for me to tame mpd. Being in such high spirits I managed to find what then seemed like the only ever existing reference to this problem(plus dating from last month!1!!): [Solved]Debian 11 MPD output fails - Debian User Forums. Yet that [Solved] implied the user made the switch to Cinnamon.

Now since we´re in MATE territory around here I thought that was pretty sad and that the History needs to be written for us "MATEeins" hence me doing some necro-threading.