How to use arrow keys in Alt+Tab window switcher?

Hello. New forum user here (btw, cool forum! It doesn’t look like other forums, it looks kind of modern) In some desktops when you switch windows with Alt+Tab you can use the arrow keys to move up/down/left/right to the desired window. In mate this isn’t possible, you can only move either left or right by pressing Tab or Shift+Tab several times. This is uncomfortable and slow when you have many windows open.
My question is, is there any way to enable this when switiching with Alt+Tab? I feel like compiz window manager should have the ability to do this but it’s not enabled by default. If so, what setting do I have to change in order to get this feature?

Hi, welcome! Install CCSM, which is a settings manager for Compiz. This will allow you to change the behaviour and keyboard shortcuts for the switcher.

You can install compizconfig-settings-manager (CCSM) via the terminal by pressing CTRL + ALT + T and typing:

This will appear in the System -> Preferences -> Look & Feel menu.

The default plugin that handles this is Application Switcher, so you could change the key bindings to something different, but I don’t see one for using the left/right arrow keys while it is open.

There are however, other plug-ins like Ring Switcher, Shift Switcher and Static Application Switcher that I think may support the left/right arrows you are looking for.

If anything goes horribly wrong, you can reset Compiz from MATE Tweak.

The default UM 16.04 install provided the ability to switch virtual windows without any additions or modifications.
Ctrl-Alt right or left arrow is what I use

I’ve installed the configurator and will try those switchers you mention, @lah7

@pfeiffep ctrl+alt+arrow switches workspaces for me. What do you mean “virtual window”?

I seem to remember reading that work spaces are also referred as virtual windows. Maybe just a MS Windows term

Hey, I just saw the last reply appear without having to refresh the page. Cool!
Judging by the settings of the other switchers, they all seem to only allow you to go back and forth between windows. Maybe the setting I’m looking for is somewhere else or hidden?

OK - I think I understand - You’re searching for
solution to switch windows AND choose a running application in the target window prior to switching correct?

You see, when you’re switchincg with Alt+Tab, you hold the Alt key and keep pressing Tab until the window/app you desire is selected, and then youc release Alt, right?

What I want to be able to do is, press and hold Alt, then use the arrow keys to move focus until the window I desire is selected, and then release Alt.
Same as using Alt+Tab but you can go in any direction this way.
Example desktop environment with this feature: xfce (in case you want to try for yourself what this is like)

[quote=“Staynluss, post:8, topic:6595”]
Same as using Alt+Tab but you can go in any direction this way.
[/quote] Shift + Alt + Tab moves the opposite direction for me … probably not as elegant as you’d like

Hi @Staynluss. I’m a longtime keyboard navigator and play a lot with compiz but must admit I’ve never used what I assume is arrows to navigate multiple lines of apps in the Alt+Tab display.

Compiz has 4 switchers (2 are really wild) but none seem to have this feature as I look through all the key bindings. The closest I find is enabling mouse selection.

Hi @pfeiffep. Compiz created (I think it was in their history) the term “Viewport” to mean one of the desktop areas of their composite/total graphic area.

Thanks for the info @Bill_MI
I guess I’ll have to stick to mouse selecting for now while it becomes possible to do what I intended, if this feature is ever added, that is.
Time to do some extensive compiz configuring (to disable all the fancyness)

wow, dissabling the unnecessary features in compiz is proving very difficult. I’ve spent the last few hours trying to do it and haven’t finnished yet. Some things seem to be impossible to turn off.
I cannot disable the transparent background in the static application switcher, nor its flashing. I cannot disable the drop shadows on windows and I cannot disable the showing of window contents when moving them.
I just wanted to know if maybe you @Bill_MI know how to do any of this? or if you can confirm that none of these things can be done either?

@Staynluss, I hope your time will pay off as you climb the compiz learning curve. Under the configuration hood can be quite challenging.

I saw a bunch of compiz updates come through just yesterday and I haven’t seen any difference which is good. It’s very active at the moment and I was reading how the Ubuntu-Mate Project Leader @Wimpy is directly involved and appears frequently in the change logs.

On a side note, Ubuntu’s Unity desktop is a Compiz plugin and they took Compiz in a direction away from general usage. This neglect was at a low a few years ago but it seems to be back on the recovery path thanks to folks like @Wimpy. For several years, Compiz was arguably only stable when the older versions were hacked in but that caused its own set of problems.

Now, about the switchers…

I don’t see a way to turn off the transparent background in “Application Switcher”.

I run the other conventional “Static Application Switcher” that doesn’t appear to have a transparent background. But it has a growing shadow I wouldn’t mind turning off but find no method to do so.

Neither is flashing. Could it be a bug/quirk?..

One general problem with Compiz is how very few people see/tweak it on a lot of different hardware/graphics/driver environments. I would hypothesize the growing shadow I see could be the flashing you see.

“Ring Switcher” and “Shift Switcher” are too wild for me so I’ll ignore them.

Sorry so long but I have to mention graphics environment I’ve intentionally stayed nVidia and had good luck with their proprietary drivers in the Ubuntu world (knocking on wood). The open-source Nouveau driver has come a long way but still lacks good performance on my systems. I’m curious what your environment is?

For several years, Compiz was arguably only stable when the older versions were hacked in but that caused its own set of problems.

I'm also using the static app switcher and I've taken a screenshot of it. Notice that the text in the browser (your post) can be seen through the switcher. (BTW the icons are very big and I'd like to make them smaller but that's not the priority now) 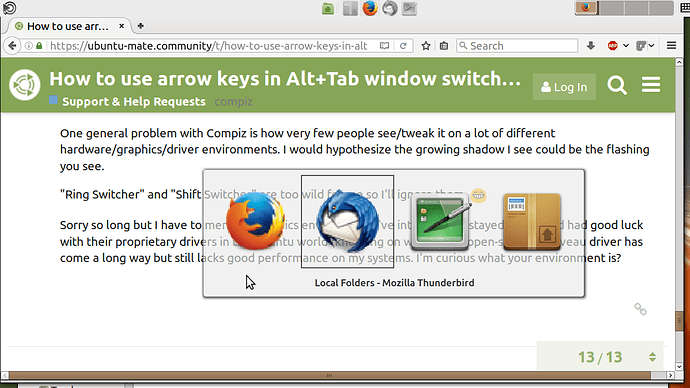 Neither is flashing. Could it be a bug/quirk?...

it was flashing yesterday but not today.

BTW your post isn't long, even if it is, it doesn't look like that. This forum makes everything look more appealing

Ooops, I stand corrected. It IS transparent! And opacity at 100% but changing it does nothing.

If you sit on one selection, do you see the shadow growing larger and darker and that transparency disappearing in a very coarsely animated way? Hmmmm… if you sit there for almost a minute it cycles through this darkening process again.

EDIT: I see what the settings on the top of “Appearance” tab do. That’s the foreground/background window selection behavior as you cycle through them.

I don’t see any of that, so I probably disabled somehow when I was changing the settings.
But you know, I agree with you, this switcher transparency is a minor thing that doesn’t really bother me too much.

I am more concerned about the drop shadows and window contents when dragging. This are things that change in real time as you move a window (therefore they take some ammount of cpu) and need to be disabled.
I will focus on those now.

It could be interaction with other settings that differ. I tend to disable a lot of features enabled by default. A quick list from my install notes:

About the show-contents-while-dragging. I looked around a little and don’t see anything and I didn’t really expect to because Compiz and high CPU usage is almost synonymous. It’s in Mate-Tweak under Windows but that’s for Marco and settings are disabled when Compiz runs.

Apart from static application switcher, everything in both your Disable and Enable lists is disabled here, except for Desktop Wall which is the only way to switch between workspaces without animations I’ve found.
I think I disabled some plugins I shouldn’t, because some things got broken, but again they’re all minor things.

I just tried searching in the Compiz forum but it seems it’s dead. Their mailing list link doesn’t show anything.
I think I’m gonna end up going back to marco with the inferior switcher but first I’ll try one more thing…

any news with this behavior?. I still can not do it yet in MATE Desktop 1.18.

It’s a shame, this is the only reason I do not use MATE Desktop and I would like to use it.

I also needed this feature very much. so I built a little tool for it. Feel free to try it: 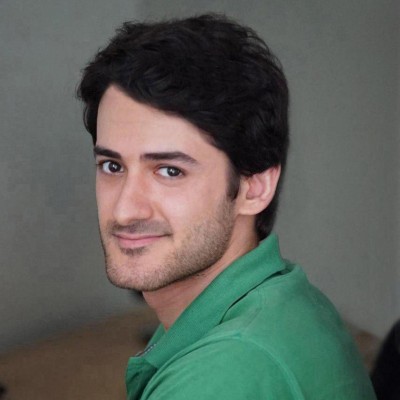