I tried to ask this question at the Ubuntuforums, but nobody could help me because they didn't understand how Mate works with graphics cards. I was adviced to switch to the regular Ubuntu, but I really like Mate so I want to see if I can make it work first.

The situation is that I have a problem with using the Nvidia-396 driver on a laptop running Mate 18.04.

I have a brand new HP Pavilion Power 15-CB084NO laptop with a Nvidia Geforce GTX 1050 graphics card, and I'm trying to use an external monitor connected via HDMI. However, Ubuntu Mate doesn't detect any signal from the monitor when I'm in "Monitor Preferences" and pressing "Detect Monitors." (Windows 10 can detect the monitor on the same laptop, so it's not a hardware problem.)

I have installed nvidia-driver-396, and in "Software & Updates / Additional Drivers," it appears that it's working (see screenshot below): 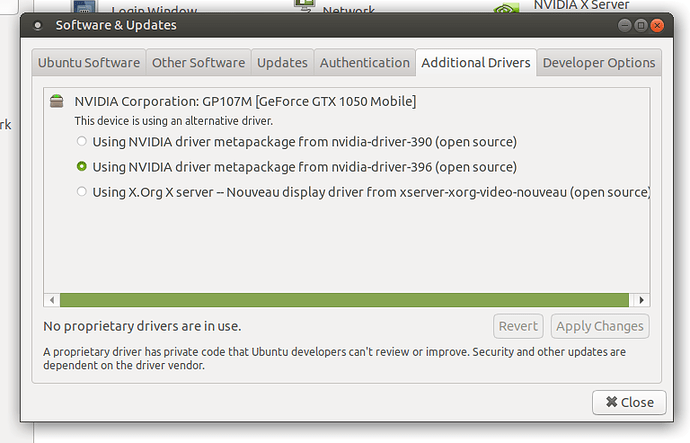 But for some reason, it's using the Intel driver instead of the Nvidia driver, and that this is the reason why I can't get a signal on the external monitor.

When I type "cat /var/log/gpu-manager.log" in terminal, a part of the reply is:

So, what am I doing wrong? Does anybody know how to fix this in Mate?

Do you happen to have “nvidia-settings” installed?

Yes, it’s installed, but nothing happens if I try to launch it.

Could you please be so kind as to launch it from terminal and send the results? It seems as if the driver exists, but is not loaded. Also, lsmod results might show it or not. If you can get nvidia settings to work, you can choose the driver easily from the gui, but that may take us a bit.
I suspect one of the old hands with Mate can help more, because there appear to be some Mate issues that are separate from Debian or Ubuntu, but let us start with the terminal output of both commands.

When I try to start it from terminal, I get the following error message:

ERROR: NVIDIA driver is not loaded
ERROR: Unable to load info from any available system

Module is clearly not loading.
What happens when you try sudo modprove nvidia?
If nothing, can you try install module-assistant and installing that way? It should install all the necessary headers and build dependencies.

modprobe: ERROR: could not insert ‘nvidia’: Required key not available

required key not available is usually an error if secure boot is enabled and one tries to install proprietary drivers.

sorry about typo, not enough sleep.

I am sorry, I should have written whole command:

This should work as your kernel is signed, and you are merely adding a module to a signed kernel.

It will give clear instructions. Keep in touch please. I used to go through this a lot.

I don’t have secure boot enabled on my machine.

Okay, so I installed the module-assistant, and when I run it, I choose to work on the nvidia-kernel. When I try to build that kernel, it tells me that the source package may not be installed and asks if I want to install it. When I press yes, I get the following error message:

W: --force-yes is deprecated, use one of the options starting with --allow instead.
E: Package ‘nvidia-kernel-source’ has no installation candidate

Can you try to install nvidia-kernel-source-396 via apt or synaptic? module assistant can be a pain, but it usually works. if you have all your kernel headers and nvidia source installed it will build, and since you do not have secure boot enabled it will install. I am just perplexed now as to why it will not load with sudo modprobe…

also, to build, you may need nvidia-dkms-396, and a whole bunch of other stuff.

at any rate, there is indeed a kernel source. It might be easier to install synaptic, so you can see the nvidia stuff graphically.

Just to make it easy so people can see which nvidia packages you actually have, can you please be so kind as to run?

If I try to install nvidia-kernel-source-396 via the terminal, I get:

OK, i synaptic just search for nvidia, omit the 396.

What I am not seeing in the aptitude search is something I expected, although mine is 390, to wit:

I would expect aptitude to return those things, since without them, the kernel module cannot be built.

Please try to use synpatic or apt-get to install nvidia-driver-396, since that should pull in the other packages, unless synaptic says it is installed and aptitude does not, in which case, there is a problem with apt-get, and that is involved.

I am running out of ideas, but before I did anything, I would now run

just in case the script that the distro uses to compile and install the module did not for some reason work.

then use synaptic to install or reinstall “nvidia-driver- 396” and see what happens.

Normally, I simply wait until a distro is installed and use apt-get or synaptic or aptitude to install things like this, so I can troubleshoot if something takes a bif of a wrong turn, but you will get this done, I am sorry is appears so tricky.

I have not done a source install from the nvidia website download in a while, but that always works, presuming you are comfortable working in the terminal without a graphic interface loaded, and build and install all the requisite stuff by command. You seem to know how to do this, so keep going.