Ubuntu Mate 20.10 is again one of the linux distribution on the cover disk of the german-language magazine LinuxWelt 2021-01. Yeah, we still do cover disks and made them even boot a hybrid GRUB2-bootsector for BIOS and EFI.
The latest issue of our magazine is now out on newsstands around Germany, Switzerland and Austria.

And here's the page from the magazine in Ubuntu Mate 20.10. 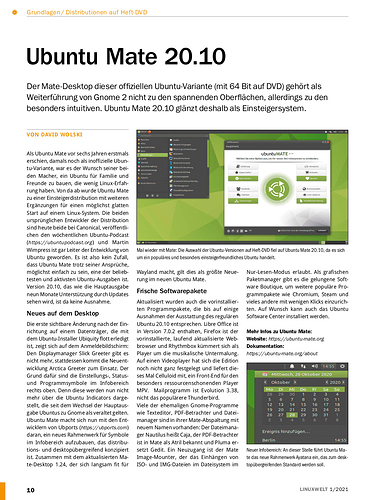 Basically a modernized and actively developed follow-up of Gnome 2, the Mate desktop may not be the fanciest or most exciting Linux desktop - but without any doubt one of the most intuitive. Thanks to this desktop Ubuntu Mate 20.10 stands out as the most beginner friendly Ubuntu variant.
Editor: David Wolski

When Ubuntu Mate made its debut six years ago, back then still an unofficial Ubuntu remix, it was the intention of its two creators to build a versatile Ubuntu for family members and friends who had little to none experience with Linux systems. From then on Ubuntu Mate quickly became an highly regarded entry-level distribution with plenty of additions for a trouble-free start with Linux on the desktop. The two initial developers of the distribution are now both at Canonical, publish the weekly Ubuntu Podcast (https://ubuntupodcast.org) and Martin Wimpress has even become the directort of Ubuntu desktop at Canonical. It is no coincidence that Ubuntu Mate is still one of the popular and active Ubuntu editions and sees plenty of active development and refinements with every release. Like its cousin, the main Ubuntu release with Gnome, it will receive 9 months of updates and bugfixes.

What's new on the desktop
After an installation, easily done thanks to the tried and tested Installer "Ubiquity", the first visible change from last version ist the a new greeter. The login screen ist now presented by the new display manager "Arctica Greeter" that has replaced the "Slick Greeter". The reason behind this change is a new framework for displaying status icons in the system tray in the upper right corner.

Because they are now no longer displayed via the "Ubuntu Indicators", which are considered obsolete since the change of the flagship edition Ubuntu to Gnome. Ubuntu Mate is now collaborating with the developers of Ubports on a new new framework for icons in the system tray, which will be designed to work across Linux distributions and desktops. Together with the updated Mate desktop 1.24, which is also making progress to work with the Wayland protocol, this can considered one of the remarkable changes on the Ubuntu Mate desktop.

Refreshed software packages
The pre-installed programs that largly correspond with those of the main Ubuntu 20.10 release got plenty of updates: Libre Office is included in version 7.0.2, and like in Gnome Rhythmbox is the media player for sound files. The player for video files is a programm called "Celluloid", a light footed front-end for the particularly resource-friendly MPV player. The standard mail program is the mature Evolution 3.38 and not Thunderbird that has recently entered a phase of transition.

Many of the former Gnome 2.x programs like the text editor, the PDF viewer and file manager are available as modernized reincarnations in the Mate universe, some with different names: The file manager "Nautilus" is called "Caja", the PDF viewer is known as"Atril" and "Pluma" replaced Gedit. A new addition is the Mate Image-Mounter which allows easy mounting of ISO and IMG files in in read-only mode to access their contents in the file manager.

Instead of a more traditional package manager the distribution's welcome screen offers the nifty "Software Boutique" that provides a very convenient way to set up other popular program packages such as Chromium, Steam and many more with just a few clicks. The regular Gnome Software Center is also just a few clicks away.