Some Ubuntu flavours (Ubuntu MATE included) have been criticised for not landing the latest version of their respective desktop with final releases of given Ubuntu version.

I've been working behind the scenes to coordinate with Debian and seek approval from Ubuntu to land MATE Desktop 1.16 in Ubuntu MATE 16.10. To that end, I have uploaded MATE Desktop 1.15.1 to the official Ubuntu Yakkety archives. This is so we can get some wider testing ahead of the Ubuntu MATE 16.10 beta 2 release. These packaging changes have been committed to feature branch in Debian git. When MATE 1.16 is released I will update all the packaging in Debian, my Debian sponsor will then upload all the packages to Debian and a couple of days later I will sync everything to Ubuntu. This should all happen in time for Ubuntu MATE 16.10 final release which is schedule for October 22nd.

This will not only make Ubuntu MATE 16.10 the first distro to feature a full GTK3+ implementation of MATE but also the first to ship MATE Desktop 1.16 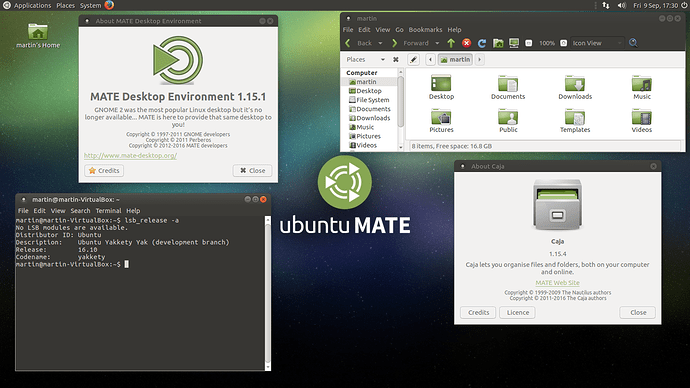 This is good news, @Wimpy. Although I haven’t been one of the critics (I actually prefer a more moderate and controlled approach to new versions, as long as it isn’t as conservative as Mint), I can surely welcome a quicker access to the latest MATE DE.

I have yet to install 16.10 as I promised before. But I I do want to do it and to help in the bug reporting arena. It’s just that time hasn’t been on my side this past few weeks. This is mostly due to a new contract that we weren’t expecting winning and it coincided with my vacations period that starts in two weeks (and only over my dead body I will cancel them, after three years without any). So in a couple of weeks is when I will finally install 16.10.

Best of luck getting MATE 1.16 in working and stable condition. And you can count me in soon to help reporting bugs.

Amazing news!!! That’s why Ubuntu-MATE is the best distro, even the best OS, out there. You hear what the users have to say and you put a huge effort to achieve the best! Thank you for all the work you are doing!

This will not only make Ubuntu MATE 16.10 the first distro to feature a full GTK3+ implementation of MATE but also the first to ship MATE Desktop 1.16

Can we expect some sort of backport to 16.04, even if it’s just built with GTK2 again?

Maybe never. Ubuntu MATE 16.04 is a GTK2 build of MATE 1.12, although a 1.14
PPA is available. And that is probably where I’ll have to leave because
the reworking to jump to GTK3 is considerable"

Well… technically it would be possible, as the default build of MATE is still GTK+2 (not counting some parts that were already migrated to GTK+3 by us). It’s just that Debian Unstable and Ubuntu 16.10 are on GTK+3 build already. Building it with GTK+2 again requires a separate set of build files.

You are right. But again right now they are working on the port so they dont have time to spare. And because of the ubuntu policy they can not upgrade the lts to a new version of the ubuntu. So it will be optional via a ppa. Another proble. Will be that the bugs will apear for the new version and so on. It,s posible if someone will have the knowledge and time to back port to gtk2