I am running CentOS 7 where the latest version of MATE available in the repositories is 1.16.2 so I am stuck with that version until someone, or I myself, decided to compile and make available a later version.

With that out of the way, I am having problems with my multiple keyboard layouts. I regularly switch between US English (default), another western layout and Pinyin, the latter using fcitx. The problem is that in many applications when I switch to the other western layout it does not seem to stick. As an example, in Chromium, just hitting ENTER in one single entry field switches me back to the default layout. In Firefox and Thunderbird that does not happen but switching between different fields in the same app does switch me back to default layout. Very annoying as I am sure you can understand.

It does seem that having multiple MATE Terminal windows on the screen works as expected and I can set a keyboard layout in one terminal window, another one in another window and switch back and forth as expected.

I am mentioning fcitx above but that seems to work flawlessly between terminal windows, apps etc, ie regardless whether I am entering in Pinyin or not, it is remembered across apps and within apps.

Is this a MATE bug? A known one? Have I misconfigured something perhaps?

Mate keyboard configuration supports an option which regulates whether layout is being changed globally or layout switching occurs in the active application window(s) only. Your situation could be explained with that option.

Where do I find that option? And how would that explain the keyboard being switched while typing in a single chromium entry window, or within firefox/thunderbird but different windows, and why does it not stick when reverting to the same app? 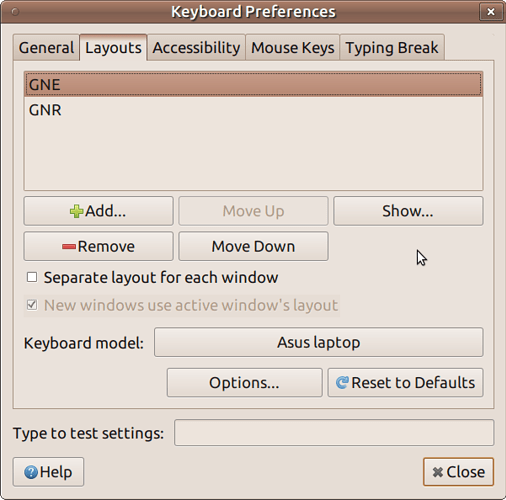 how would that explain the keyboard being switched while typing

Surely, that would not explain why the layout switches itself while typing. That is just a guess. I mean scenario when I launch, say, LibreOffice and Firefox, select proper layout in text editor, go to Firefox to google a bit and find out that Firefox has different layout. And more to it, each new window inherits its layout from an active window adding even more mess.

Just checked, I had "Separate layout for each window" and "New windows use active window's layout" checked.

Perhaps someone could confirm that switching between multiple keyboards in MATE does work as expected?