Mate on a Samsung Chromebook Plus V2

TL;DR: Mate20.04 runs great on this Chromebook. Mostly works OOTB as I've come to expect from this distro. The few things that don't work are features I don't use or have work-arounds for.

I bought a Chromebook for my elderly father who lives in another state and was calling me every other day for help with Win10 (plus a second one for myself so I could have an identical setup). I found I really liked the the screen, keyboard, and touchpad but couldn't use it for much beyond web browsing. Crostini and Crouton didn't get me the full functionality I was after so I reflashed the BIOS and installed Ubuntu Mate 20.04. (My preferred Linux flavor after years of distro-hopping and duEl booting).

The only thing that does not work as expected is the internal audio. This turns out to not be such a big deal for me as I usually use Bluetooth speakers or headset, USB audio also works fine.

'Tablet Mode' does not work, but I found this Chromebook too bulky and heavy to use as a tablet anyway.

The top row of keys is remapped by selecting a Google Chromebook keyboard. Screen brightness controls are a little flaky but everything else works as expected.

Disabling firmware Write Protect involved removing the back cover and disconnecting the battery then booting in developer mode. There was a little trial&error so I'm not sure of the exact procedure.

If anyone has an EASY fix for the screen brightness (works with GalliumOS ) and Internal audio plz post. 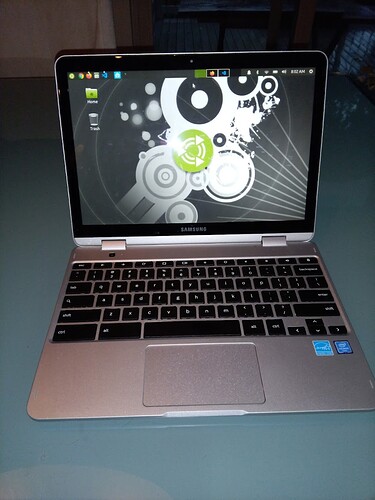