Odd functioning of the sidebar

Desktop computer, Ubuntu 22.10; Mate was updated (or Upgraded I don't recall) just 3-4 weeks ago and this odd appearance of the side bar occurred at that time:

I've been using the sidebar in Ubuntu Mate for several years but recently, an update/upgrade to Mate sort of ruined the operation IMO. I've tried to find a way to adjust it's operation but what I'm seeing in the sidebar that I want to fix isn't covered by any of the settings.

What it does now, which it didn't use to do, is crowd all the open windows into a tiny space stacked one above the other with no break between them. Making it hard to resolve visually, and with the mouse cursor. And the icons starting at the top fixed icon 'click here to hide windows...', get smaller as they stack downwards. The top folder icon is bigger than the current folder Icon at the bottom of the icons (as I open apps). The more apps I open, the more crowded the open app area on the sidebar becomes.

And, usually when I open a browser (or any app), before it would show up as an active app in the side bar as a small icon, but now, it shows up as a tiny icon AND a huge, can only see half of it, icon below the other open apps' icons. Weird. I can click on it an open the app too. What's it for, why is it there?

Where do I find more control of sidebars in Mate? I can't find anything in mate-control-center. Is this a tweak app somewhere in my system I've lost track of over the years? It's not the Mate tweak as now there's only one page of stuff on Mate Tweak and it doesn't really mention sidebars.

I can't even find any reference to the sidebar now since the Mate update/upgrade. I can right click on it near the bottom of the screen and a 'Properties' is there, but adjustment are few and none for what I'm trying to adjust.

Anyway, can someone point me to Mate's sidebar Properties or Preferences or Tweaks? Thanks.

do you have some screenshots please?

Note how the sidebar icons decrease in size. Until you get the giant Brave icon beneath the 3 stacked icons. There's those 3 dots in the middle of the sidebar as well and that's a pointer to this open browser page for some reason? 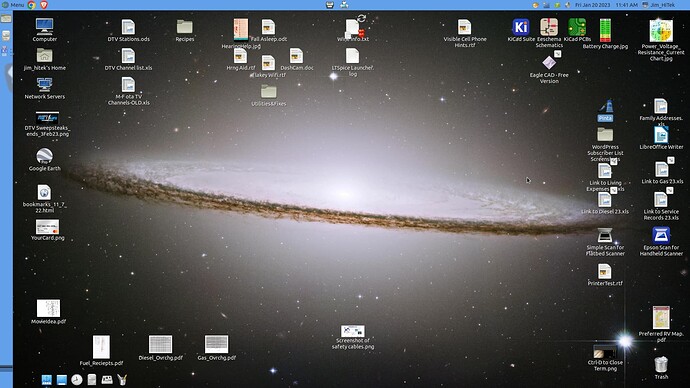 I see the issue. What Panel theme are you using?

I am using Blue Menta theme.

ok, but you must have a panel theme... like Familiar, Pantheon, etc (from MATE Tweak)

I must? Er, Mate Tweak doesn't show a 'Theme' tab or button. But listed in tweak there's a Window Manager --- 'Marco'. Is that it? (That's default). In Mate Tweak under 'Panels' I have 'Traditional'.

on the Panel TAB of MATE Tweak

I show Traditional? Is that it?

you could make a note of the panel used and choose another, then switch back, but you will lose and customization you made to the current panel. See if that fixes the panel. It looks like the bottom panel of Traditional moved to left side

Changed to 'Familiar' which wiped out that side bar and some stuff on the top bar. I right clicked the
top bar and added a bar but it's not showing any of the open apps. I'll keep playing with it.

Okay, went back to 'Traditional' and it restored the bar to the bottom and it's showing all the open apps the same size icons. Move it to the left side, and they stayed like I want them. The giant icon in the middle of the bar that showed the first open app is gone now. Trash is at the bottom of the bar where it was not there before (I'm fine with that).

I think it's fixed itself. Thanks for your help.

FYI - My Mate tweak has 3 choices, Desktop, Panel, Windows. There's no traditional 'Tabs', they are just clickable icons on the left side of the page in a column. What I call a tab, are those file folder style tabs on the top of most browsers.

Okay, this is weird too...when I changed to that 'Familiar' theme it wiped out the two printer icons I had in the middle top of the top bar. When I went back to 'Traditional', that restored the regular setup I'd made but the printer items did not return. And now I can't find TurboPrint in my Mate app listings.

Where is it? Can you point me in the right direction to recover my printer setup?

if you didn't save the layout modifications are lost. You say it should be in the right click add to panel?

Yeah, I paid for Turboprint...which is the only way to print using my iP90 printer. It's not listed if I right click and try to add to the top bar where it was before. 'Printers' doesn't seem to exist either. I think I pulled the icons off the desktop and dropped them on that bar but I don't recall now.

That's just it, it's not on the desktop or I would do the Drag&Drop. If I right click, it's not in the listing of available apps for the panel (task bar).

The printer drivers are still available, I find that if I open LibreOffice and click on the printer icon, it shows up. So not a big deal. I'll have to sort it out here soon.

It does print fine from the Libreoffice app though. I'll find it and make a new desktop icon for it. Anyway, thanks for helping restore my sidebar. I like it now.