Partitions - look odd on my disk - Is that normal?

On my disk I have 4 partitions as sub-partitions of sda3 (see screenshot). Is that normal? What did I do wrong? 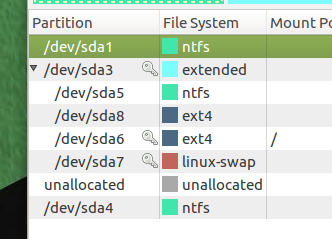 Thanks for any help.

You didn't do anything wrong.
It's the consequence of sda5,8,6,7 being 'logical' partitions I think.

Can I make one of these logical partitions a boot partition?

I'm pretty sure that you already have a boot partition ... here's another example [I labeled the partitions] This laptop had Windows 7 installed as default from Dell; I added Ubuntu. 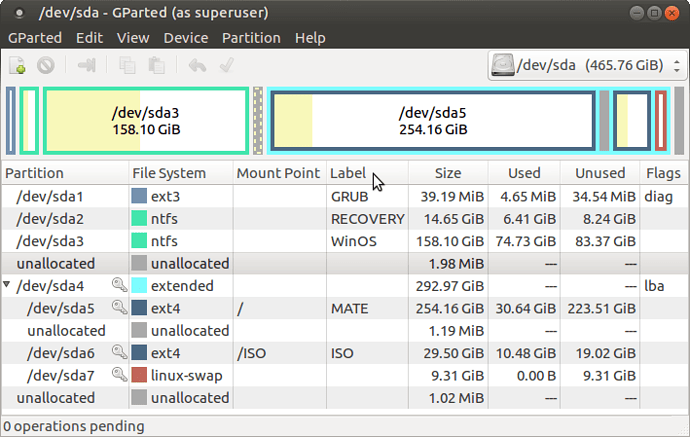 This is perfectly normal. Your disk has a MBR partition table, which is limited to 4 primary partitions.

What is seen here is an extended partition, which counts as a primary partition but is actually a container for logical partitions.

they are logical partitions - you can have many of these (not sure on the exact limit).

As many as there are available drive letters.

That is not really true. I know there are lot of documents declaring that but they are wrong. Windows 7 can boot from a GPT disk but only after screwing the partition table and make itself think it is a MBR table, after that it will boot; I haven’t tried with XP but obviously, this is a wrongly approach to take because you probably get a serious problem trying to recover your files after something went wrong.
On the other hand, if you put a GPT partition table on a drive with a non UEFI BIOS it will load it without problems.

This is an output from one of my machines with non UEFI BIOS after running sudo parted --list:

[quote=“malwaredpc, post:7, topic:9637”]
If I’m not wrong, I think it was 16 extended logical partitions.
[/quote]A few years ago I was loading loads of distros on an added 2TB drive. You wouldn’t believe the grub boot list I had.

On this MBR drive, sdb16 seemed to be the last one I could use. I could create sdb17 in GParted but couldn’t do anything with it (like putting a file system on it). Before anyone asks, sdb1,2,3 were primary and sdb4 was extended containing sdb5-16.

My 2 cents from a fun time.

Thanks so much. It is amazing how helpful you are.
I learnt a lot!

Yeah, I totally believe you!!! I used to do stuff like that, but now in a 32 thumb there’s not enough space.

I just forgot to mention. The limit for (primaries) partitions on GPT is 128 but you can change that number or decrease it by tweaking it.