The concept I have of a functional desktop is a follows.

Going to different work benches to focus on different tasks.

The current "workspaces" is a good foundation for this, but is insufficient. I visualize a clean desktop on which I might keep a few items handy (by having icons showing).

The uploaded image portrays what I am visualizing as my "tool rack". 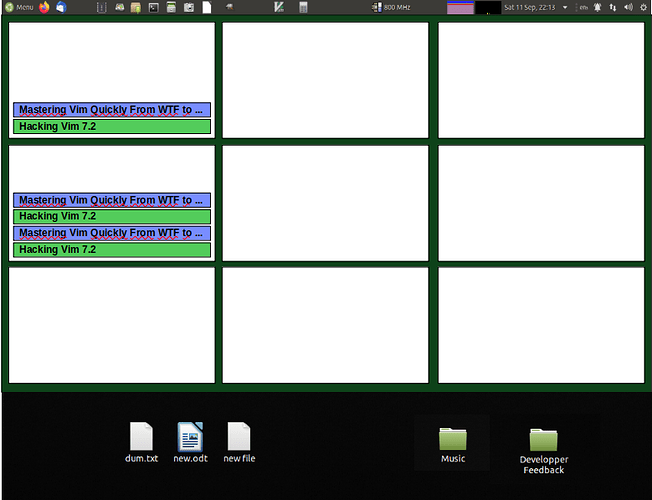 The number of shelves (vertical) and bookcases (horizontal) could be customizable.

Then, more importantly, this bookcase/tool-rack drops/pops down when clicking on the icon which would be visible on the panel.

I would see a different bookcase depending on which workspace is currently displayed (context-dependant). After all, you can't access physical bookcases when you are on the opposite side of the wall in another "work room", which is the paradigm that I am proposing be implemented.

The above summarizes my virtual implementation of my old desk which had a bookshelf installed on top of my desktop, for ready access of books, calculator, CDs, or other instruments for which I preferred ready-access, rather than go looking into different drawers.

Similarly, the desktop itself would be unique (context-dependant) to each workspace, NOT shared by all workspaces. Again the paradigm of going to a different workbench with a different set of tools and workspace layout, appropriate to the different uses for which each workspace is dedicated.

The existing panel app that is like a drop-down drawer does not take into account the human habit to physically place an item on a shelf, so that it may be later reclaimed from that same location.

I am REALLY hoping this kind of functionality can find its way into the desktop environment. With the trends to have all platforms behave the same, I am afraid that such a useful and practical paradigm will never find its way into reality.

My vision did not go 3D, because that is not how my mind works with the physical/visual/spatial placement of "objects". That doesn't mean that the concept could not be expanded to 3D, to emulate the stacks in a public or university library.

Here's hoping for the best ... and I will thank the developers in advance for making it happen.