This has been happening for a while. I noticed it over the summer, but just worked around it by only printing a single copy of things, but then on a new fresh install of impish, it's still happening - so we'll see if it's me or something else.

I have a Brother HL-3170CDW Printer that Ubuntu (Reg or Mate) immediately sees and connects with and I can print without issue from that standpoint.

But if I print multiple copies of a PDF (in any application, Atril, Master PDF, etc) I get the squared value. So if I print 2 copies (of a 1 page doc), I get 4 pages printed, if I print 3 copies, I get 9 pages printed.

At this point, I'm curious if anyone else has this issue or if I should report it as a bug?

I don't have a Brother printer, but I personally don't have this problem and I don't think I've ever had anything similar to this, either.

Since I don't have a Brother printer, I need to ask: Is there some special Brother configuration tool that you have to use every time you send something to the printer? Are there two places where you can specify the number of copies of documents to print?

Well, I did a little research on Master PDF Editor and discovered it's a Qt application, whereas I know that Atril is a GTK+ application -- so the applications don't have that in common. If they were both GTK+ applications I'd point the finger at GTK+. So far my best guess is brain damage in the Brother printer driver, which isn't hard to imagine since people around here have complained about spotty Brother support on Linux for a while.

Here's some things to test:

Going through each of the three bullet points will help us solve the problem.

I have a Brother MFC-J480DW printer and do not have that problem.

I would suggest going to the Brother solution center and downloading and installing their drivers. 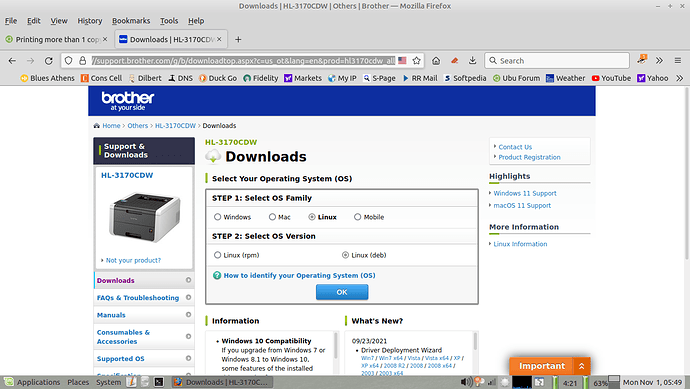 it is fairly easy as I was able to do it.

Sorry for the late reply on this - I've been partially super busy and partially sick and ignoring non-immediate needs!

If I print to printer 2 copies of a 1 page text file in pluma - I get 4 pieces of paper printed (so It's like it sends the whole print job twice, instead of just sending the document twice)

So printing to file - works as expected.