I've had occasion to run into the Familiar Desktop panel setup recently (due to attempts to reinstall that script I've been playing with from LibreELEC) and I've got a question that's been bugging me. As people who see me around the forums know I'm a big fan of the Traditional Desktop and like the way things are thought out. I hated Familiar when it became the new default, but as I said I've had occasion to use it a bit lately.

Really like the way the Familiar panel opens with the super key. It's a nice feature that I wish would be extended to the Traditional Desktop as time goes on and the ability to navigate the menus by keyboard is something that I admit grows on you. The thing is though, the Familiar Desktop has not just a menu for applications, it also has its Preferences and System applets in a menu. There are variants of this in the Familiar Desktop, the panel launcher applet lists them right inside the launcher itself. This provides for less desktop real estate being taken up and a 'cleaner' look.

My question though is this: What happened to Places? Am I just not seeing a button somewhere or is places simply not considered important anymore? Is it really missing or am I just missing it?

Familiar layout is using Brisk menu. Brisk menu has no 'Places' category. Technically, nothing happened, it is simply not implemented in Brisk menu.

As for me, I am using the bookmarks (completely configurable to include what you want) in the left panel of Caja.

So under Familiar people use the file manager to load external disks inside the machine (as opposed to external drives which get mounted on insert) and having a menu for it is considered redundant. Good to know. I was just reloading the Traditional desktop before as it was (no pun intended) more familiar to me and wanted to know if there were a faster, easier way. Now I know.

I am using different menu. If you like Brisk, you may crop 'Application-Places-System' menu to just 'Places' and keep it in panel. 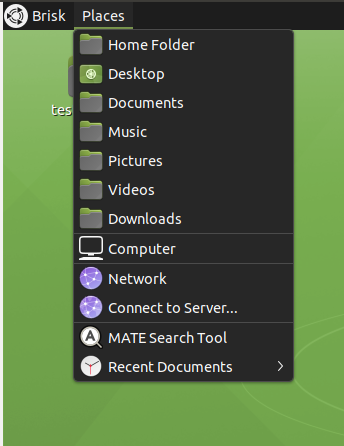 You've got my attention. How do you do this? 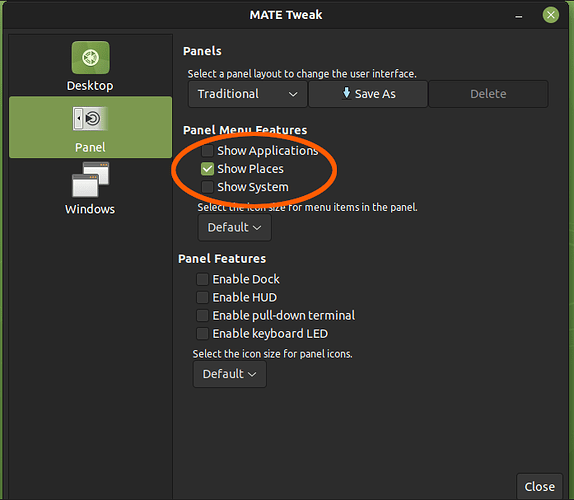 Would you believe that I'd never noticed that you could run Places as its own thing? I'm going to have to make an effort to look through Mate-Tweak more closely. Thanks!

You are welcome. By the way, this approach was used several releases ago. Similar "combined" menu -- Brisk + Places/System -- was used as a default one for some layout.

Honestly, I'm not super crazy about Brisk Menu but I do understand why some would like it. I do see the merit in some of its features but I also really like the layout of the Traditional menus. I just wish they could be controlled by keyboard the way Brisk Menu is.

I just think it's a good idea to learn how to do things in the default setup as well as my preferred setup because it means that I can get along in both environments.