It is I again: that guy who always has... unique situations going on with his systems.

I'm also that kinda guy who has... refined technical needs and who enjoys wasting cycles generating random screensavers. Am a particular fan of all of those extras from the extra packs.

My question concerns the StarWars one which I would like to configure with something funny.
The problem I am experimenting is that I am unable to locate how/where to setup this value.

My first reflex as a user was to check under Screensaver and select StarWars which would give me a button to write something in. But of course, no.

I then (of course) used some engines but didn't found anything relevant in terms of xscreensaver-text. I actually found 1 post from 2010 referring to the actual xscreensaver config hinting to bypass it via ~/.xscreensaver

Of course that file doesn't exist. Same with the xscreensaver package for that matter (which xscreensaver outputs nothing).

So, oh dear Community, HOW in 2019 does one customizes the text under the StarWars screensaver??

The official nice looking demonstration with custom text - https://www.youtube.com/watch?v=UUjC-6e7y_U (found inside starwars.xml configuration file) says that we should use xscreensaver-demo.

So you should open xscreensaver-demo and go to Advanced tab, then set needed option in Text manipulation region: 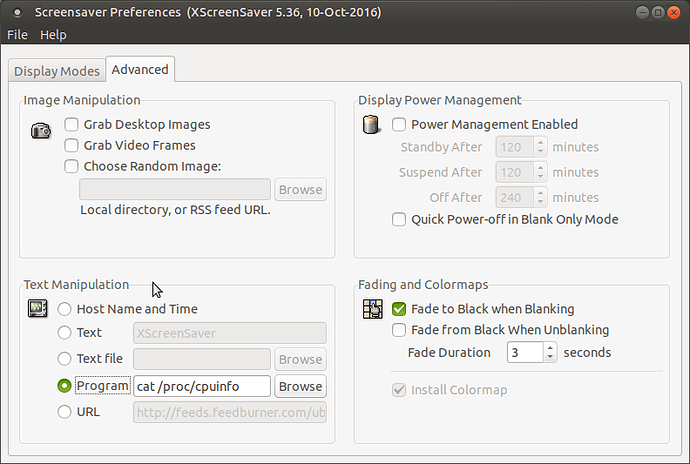 (I have set Program to be executed - cat /proc/cpuinfo )

and this will result in the following:

If you need any special settings then launch xscreensaver-demo, switch to Display Modes, find StarWars here and click Settings button for it.

Thanks a bunch for your quick answer.

So the original problem is that even though we can have/see/use the StarWars screensaver without having to installl the xscreensaver package that we will be unable to customize the displayed text from it.

To explain this differently, if a user has the following packaged installed:

Then they can use/see the StarWars under MATE -> screensaver and they will be unable to customize it unless they also install the package xscreensaver.

Now, the (minor) problem one will then have, using UM 18.10, is that after the xscreensaver has been deployed:

Is that (yes we can then launch it and use it per the above screenshot) we will end up with a duplicate Screensaver under in the UM menu.

So a fix that introduces a problem. Not sure how this should be handled next.

Oh well, at least I can now change whatever is written under my screensaver. Thanks @Norbert_X

Another downfall is that I am now stuck w/ 2x screensavers daemons running all of the time (So 2 screensavers that will start on top of another).

Can I link this to a JIRA ticket?

I think you can customize this behavior from Startup Applications - mate-session-properties .

Are you suggesting that there should now be 2 screensavers entries under mate-session-properties ? Because if so, am afraid that there is only 1 entry listed.

And unchecking the single instance of screensaver found under mate-session-properties did disabled that 2nd instance. Thanks a bunch!

Moving forward: I have applied the newly released 19.04 (Disco Dingo) and have been facing the following (minor) error prompt during upgrade process : 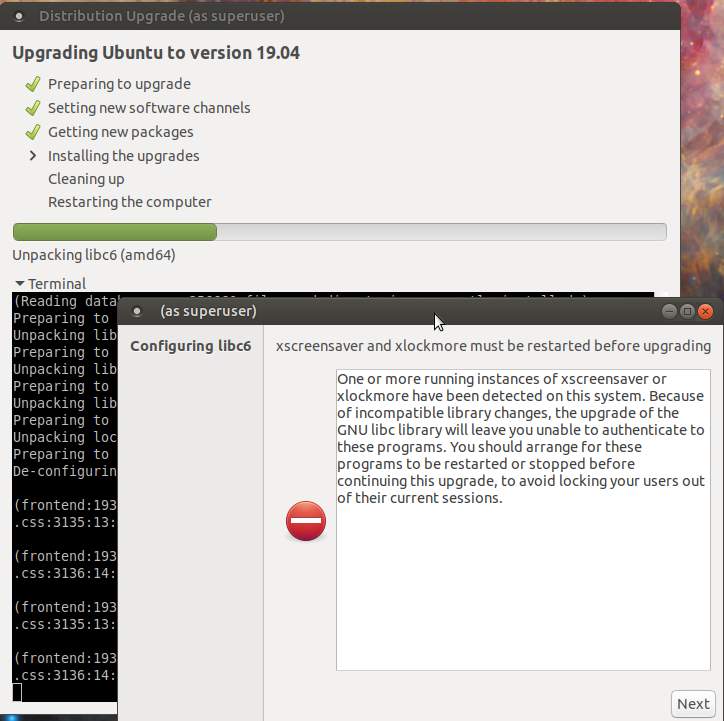 Have posted this into this thread instead of starting a new one. (And am still wondering if I should open a bugreport? And if so, how?).