One thing I have noticed is the backup program that comes with mate isnt very good at letting you know when there is an issue.

For example, I have a USB disk plugged in that is configured as the backup location. It works and the backup program dutifully backs up each day on a schedule to the drive. However I unplugged it at one point because I was clearing my desk and forgot to plug it back in. 39 days later I decided to just check the backup randomly and noticed no backup had happened over a month. There was no notification at all to tell me there was an issue. I could have been in a situation where I lost files had I not noticed. I quickly found the problem and plugged the drive back in whereupon it immediately started backing up on its own, however I feel that a notification should inform the user when a backup is missed and continue to do so daily until the user corrects the problem.

Thank you for your time.

How To Backup And Restore Linux With Timeshift - It's FOSS

Using a different backup program would not Help to improve the built in program.

Default programs are just that. If they do not fit your needs there are many other options which is why many of us use Linux.
It is up to the developers what they want for default programs. They do ask, and usually use what is the most popular, not necessarily the best (as defined by who?). Yet I can guarantee you that there will never be a consensus on "best" from Linux users. User vigilance is the first key to good security, no matter what system you use.

People wouldnt know there is a problem thats my point. It is reasonable to assume many people would try the default backup program. We cant have a situation where people are losing files because the program didnt bother to tell them it couldnt backup.

I use the default program and have been happy with it but It would be a good feature if it notified (nagged) you if a scheduled backup failed to start.

@pallebone @spanky What is the "default program" ? Are you referring to "Applications/Accessories/Disks/Disk image"?

@joe Timeshift looks very interesting. I have been using ReDo and Clonezilla and would prefer an easier or automated solution. How does Timeshift deal with a drive with a corrupt Grub or sector 1 partition?

The backup default is "deja-dup" located in the software boutique as far as I know. Timeshift is similar to setting a restore point on Windows.

Fixed that (deja-dup) for this topic.

Déjà Dup is developed by GNOME. It would be worth raising this bug with them via the questions area on Launchpad:

Ok I will do that on Monday. Thanks guys.

But its been days and they dont reply. Since the program doesnt actually work and backup files properly, should it even be included in MATE if the people maintaining the software are AWOL?

I dont understand it, are there seriously this few people that actually use the backup program MATE ships with? Its like nobody worries that its broken.

I may have used deja dup if I knew about it when I first started with Ubuntu. But I started with ReDo which worked perfect for me and it recovered me from many mistakes. Today I routinely rely on ReDo and Clonezilla saving my backups to an external drive. I have never tried deja dup.

I mean Im not claiming a better alternative doesnt exist, Im just saying that its an LTS release and currently the one MATE decided to ship with itself doesnt actually work, and the maintainers dont respond to bugs on the launchpag page so is that not a problem? I mean is everyone happy to let users who are new to linux just lose files for the next few years because they (understandably) used the backup program included and when something bad happened, then discovered their backups hadnt been runnning? This logic makes no sense to me. I mean I get it - nobody uses it because its useless, but then why is it included? Rather have NO backup program than one that simply doesnt work properly.

I just tried the 20.04 daily ISO, and discovered a message does pop up. 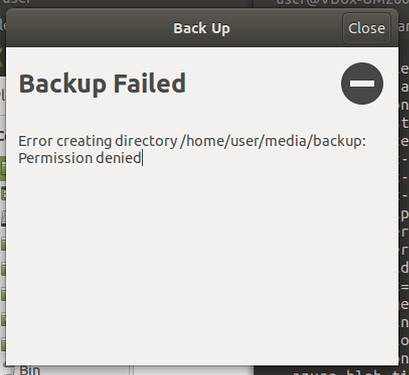 Seems to be doing what you've requested: a notification that the scheduled backup failed?

This version is a bit newer:

Before finding that out, I would suggest having patience in future. Déjà Dup is developed by GNOME, so they have a wider reach to more distros and many more users. I would have expected a lot more negative feedback if it was broken.

Ranting doesn't take action. There are ways to help, like reaching out to the developers on their mailing list to raise awareness if hacking a bit of code isn't your thing:

Or... if there is a different general purpose file backup tool that could be the default for Ubuntu MATE, then let us know here in the community.

Maybe it's worth testing 20.04 to confirm it works on your end too?

In my opinion, I think Deja Dup is a fine choice for a default. It's simple to use. I agree with post #4 in that if the default doesn't accomplish what you're after, there are other backup tools out there.

Perhaps try to perform the steps this way (like a user would).
Setup backup,
Turn off pc.
Turn on pc,
Wait a week.
Note no backup has taken place for a week.
As I mentioned, if I open the backup program, then it will start off a backup, but this isnt very useful as it should run in the background. Your test seems to have opened the program and not really tested it like a normal user. You need to use it normally, like its not open etc for a period of time.

What I would also note is so far, 0 people actually use this program as a daily backup tool. You are just another person who is "testing" in a very artificial way. People are not aware of the problem because nobody is actually using it like a real person would use it.

I bet 100% I can open it right now and it would not have backed up for a number of days. I can make a video proving it if you dont believe me.

Here is a video as proof:

Also showed the system is mostly up to date (I think I updated on Monday). Unless I open the backup program, it will never update. I opened it 4 days ago in this example:

1 file sent via WeTransfer, the simplest way to send your files around the world

Interesting. I use this to backup my laptops. So there are actual users.

A very brief search on DejaDup shows that they moved to using GitLab earlier this year.

Please open an issue with them there:

As an aside, your statement to lah7

Is very disrespectful to lah7 who is not "just another person".

Well it wasnt meant as disrespectful. Tone can be hard to interpret from text. I will check gitlab as you suggest.