I have downloaded and installed Ubuntu MATE 16.10 beta 2 on vritualbox. I have done all the updates but the firefox is still at version 48. Is that normal since Ubuntu MATE 16.04 has firefox 49 for quite some time? Or have I downloaded a wrong link? 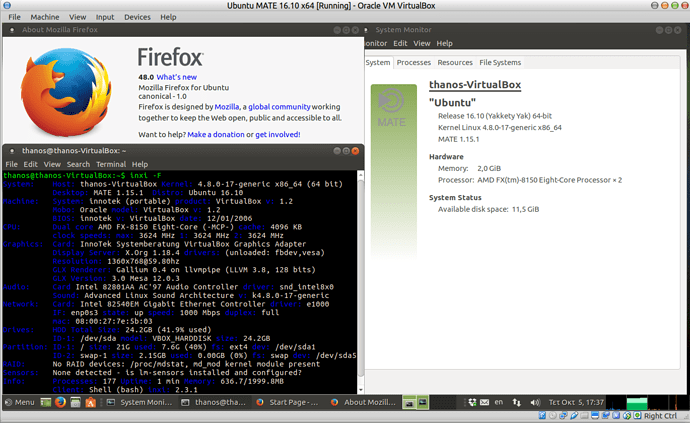 I noticed this a while back and just went ahead and installed FF49 to take care of a bug. Since then I did a fresh install of mate beta2 and now back on FF48 like you (no longer has that bug I was dealing with). But I think its time for me to install FF50 and see if it will fly. A painless way to do this is just create a FF folder in your home directory (top level) and unpack it there. Then just click on the /bin file to run it. Its not the recommended way to install, but it works for me

I think Firefox updates for the development version are slow or nonexistent. I always add the official Ubuntu Firefox beta PPA (ppa:mozillateam/firefox-next), which is updated.

During development of a new version there is always a freeze period in which no new features are added and no applications are updated. This also happened right before the release of 16.04. Firefox was kept on an older version and right after release it was upgraded to the latest version.

Adding PPA’s in either an alpha, beta or release candidate is not recommended.

Thx guys for your answers. Yeah I don’t need to update firefox in an alpha/beta version, I was just curious. That explains a lot about Ubuntu release cycle.

Adding PPA’s in either an alpha, beta or release candidate is not recommended.

Thought this is about testing, even ppa’s.