So I recently installed ubuntu mate 20.04 after a trial of leenux with the fast lightdm desktop for this old ASUS 1001P clamshell with a 7" screen

all was well until i ran sudo apt update an then sudo apt upgrade.
after it finished I shutdown. when I fired it backup about 4 days later my green mate desktop env was gone with having to click activities or use super key to pull open my favorites menu including my application menu. I have no idea where to start to revert it to what it was.

this new env which says its still lightdm has made the gui on this old clamshell "windows" like again, slow and sluggish. and it has removed full text from application menu icons.

It looks like a compact version of a full ubuntu which I have on 3 other laptops and a PC as well, but even their side bar/favorites bar remains viewable.
I have a couple screen grabs of it as well, any tips are ver appreciative, mate-tweak has also disappeared. 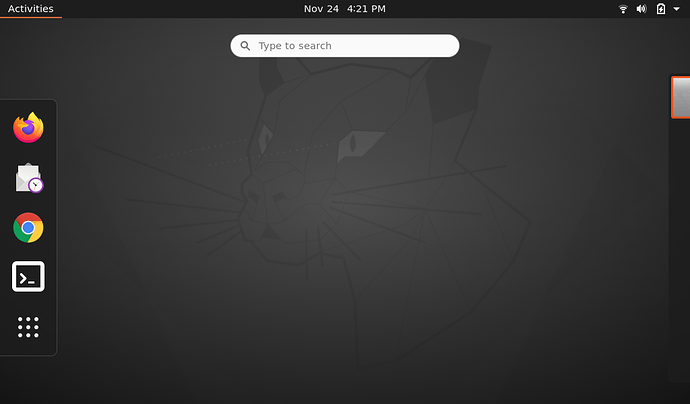 Lightdm is the displaymanager that is used bij both MATE-desktop and GNOME-desktop.
It presents you the graphical login and after that it starts the desktop environment (i.e. MATE, GNOME ,KDE, E17 or budgie, to name a few)

In your case the update/upgrade changed your desktop environment from MATE to GNOME.
GNOME is a resource-hog (which you've clearly discovered) so you probably want to get rid of it.

The following commands should give you the MATE desktop back:

It might be that I'm overlooking some extra cleanup (and i don't have the slightest idea how you ended up in this situation besides the update) so if you're unsure about it you could wait untill one of the more experienced forum members ( like, for instance, @gordon ) chime in, but if you're in a hurry this wil at least give you your desktop back.

I'm going to agree with @tkn on this one, because it's true -- LightDM is not a desktop environment. If you said that you used Leeenux with LXDE, that would make sense. But LightDM is not your desktop.

I'd also agree with @tkn that you should install MATE and uninstall GNOME, but I'd like to change the order of those commands:

The package ubuntu-gnome-desktop should not be installed on your system even though you have GNOME installed; Ubuntu GNOME is a (now-defunct) flavor of Ubuntu which used to use GNOME, but it was maintained only while main Ubuntu used the Unity desktop; since 2017, when main Ubuntu switched over to GNOME, Ubuntu GNOME has been defunct.

Another advantage of the commands I specified is that @tkn's version will remove pretty much all packages that have to do with the graphical user interface -- and then reinstall many of them from the Internet afresh. If you can budget the temporarily higher use of disk space (not a guarantee in a netbook, I suppose), install ubuntu-mate-desktop before you uninstall ubuntu-desktop. If the first command, however, complains that you don't have enough disk space for this to work, then I guess you're stuck running the commands I provided in reverse order, uninstalling GNOME first and then installing MATE.

I have no idea how you got this weird setup either. You didn't, for example, set up the computer to dual-boot Leeenux and Ubuntu MATE, and accidentally boot into Leeenux instead of Ubuntu MATE, did you? Because they're both Ubuntu based, and I could see Leeenux silently installing GNOME in the background, given the vibe I've gotten from the creators of the Leeenux Web site so far. (I was there for ten minutes, and I was already getting chills like "these people are running some kind of scam job, somehow or another." I could be wrong, though.)

I hope the above works for you. Keep us posted if you continue to have problems.

just to clarify, Leenux, as well as ubuntu mate were clean installs with full erase etc., I have no need for side by side.

OK, I do understand that lightdm is display manager versus the desktop, thanks for the clarification.

No idea how gnome was installed on a pure ubuntu mate iso update and upgrade.

I should have plenty of diskspace, will install the mate desktop and purge/autoremove the ubuntu desktop.

will keep informed. Worse case scenario, I will install from scratch.

So this is exactly what I ran. but for note, on boot to login I get no option to select the mate desktop,or from logout, login.

So how do I know exactly what destop is running on my windows manager of lightdm?

post these replies, I performed a logout an noticed a circle icon next to my loging name(the sole login on this tiny laptop)

clicked it and it offered highlighted ubuntu (default), Mate and Ubuntu on wayland, selected mate and lo and behold my mate desktop was back. still no clue how the other desktops were installed during a simpl apt update apt upgrade unless my limited apt/apt-get is the issue?

Then reinstall whole task by

In the above command ^ means task package, so Ubuntu MATE desktop will reinstalled fully.

Then reboot, select MATE on login screen and enjoy.

I am able to reboot and "keep" my Mate desktop environment now.

Logging out and back in I still have "Ubuntu (Default)" and "Ubuntu on Wayland" which I cannot seem to remove. but since I'm the only user on here at home its not a big deal.