and some complications in getting snaps properly integrated due to underlying changes in Ubuntu. 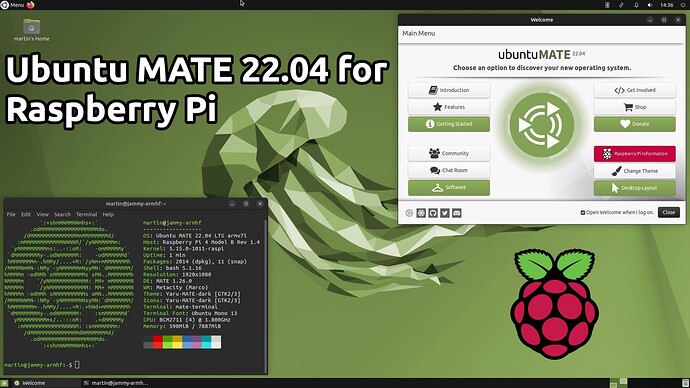 You can get the downloads from the Ubuntu MATE download page:

There is one unfortunate issue that was only spotted during final testing. It is easy to fix and will be eradicated in the 22.04.1 images due next month.

I live stream development work on Ubuntu MATE and other projects Monday, Wednesday and Friday on my Wimpys World Twitch channel

For those of you who can't join live, due to timezones, I also archive the streams on my Wimpy's World YouTube channel

Bought Pi400 in December 2019 with the intention of installing Ubuntu to use it as a desktop replacement. Installed the one form the official pi card set upsite and not a great experience, very slow and unresponsive. Changed to rasp Pi OS which I have used in both Buster and Bullseye. Its been fine but there are some issues at times. It should be said that the latest release is not as "snappy" as the earlier one.

When 22.04 was released tried it (again from the official pi site) but still not a good experience. Seemed laggy and personally I did not like the Gnome 42 desktop. Back to pi OS.

Last week I finally got round to replacing Win 10 on the wifes old (2012 Toshiba - Core i3 and 8gb ram) with linux. After much testing I settled on Ubuntu Mate. Seemed to work strait out of the box, low ram use and other than Firefox programmes loaded up fast. Simple to sort, changed browser, never liked Firefox.

Then on Thursday I spotted this site and noted that Mate was available for the Pi400. Downloaded and burned to 64 gb Sandisk Ultra card. What a pleasant surprise, it works as I had originally hoped it would in 2019. Compared to PiOS it takes a bit longer to boot (not an issue) and it uses a bit more memory (still plenty left) but its quick and responsive (except for Firefox - replaced again).

Looks like I have finally found what I hoped to get 2 1/2 years ago.

Long may it continue.

Since my last massage been busy. Cloned the 64gb sd card onto a spare 120 gb SSD. Its speeded up the boot time nicely and once up and running even Firefox starts up quick enough, might even get to like it.

Got Thunderbird up and running as well so all good so far.

As I said above Ubuntu Mate has made my Pi400 the machine I wanted when I bought it, no idea how I missed its existence. Can only assume it was because I only looked at the options on the official Pi site.

Firefox: I suggest you remove the Firefox snap and replace it with Firefox ESR (available from the Firefox website). You may find that you are happier with that.

Been using Firefox snap since yesterday and in all honesty its fine. Compared to the older versions its not laggy and on the SSD it loads fast enough.

Awesome. I don't know if you want to use Firefox only, but as a suggestion, you can take it or not, I've been using Brave Browser for the last 2 years and never looked back. Maybe install both and compare them. Anyways, glad UM is serving you well my friend

Changed impish to jammy in sources.list, then updated and it went through.

yes, you CAN upgrade in-place. I've done it on my raspberry pi's

This topic was automatically closed after 30 days. New replies are no longer allowed.