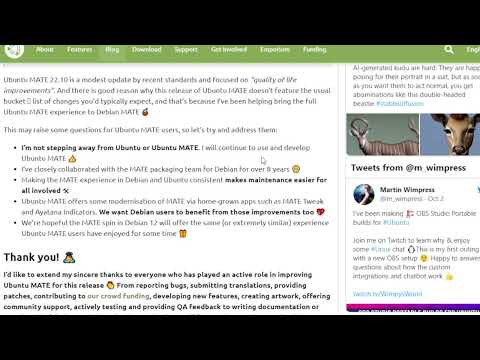 This is very cool! I was disappointed when the pre-release notes for 22.10 had comments disabled, otherwise I would have expressed my appreciation for this happening there. Anything that helps to spread the upgrades and changes made to the Ubuntu version of Mate. which includes so many smoothed out papercuts and annoyances and other common sense considerations to the rest of the Mate world is a net positive as far as I'm concerned. I love to see this happening and hope that once these things are in Debian proper that they will be taken up by other distros with a Mate desktop.

Thanks for doing this!

I have to admit until recently, I didn’t care much about the Snaps debate. At least with UM it’s not that much of an issue. I am using Kubuntu now and no problems with Snaps. But on Ubuntu-proper, the Ubuntu Software Center kept having an issue from the start of the 22.04 LTS and it seemed 22.10 was better but it kept having hold-ups on updates with the few Snaps included.

I hope a Debian-Ubunt-Mate version does come out next year when Debian 12 Bookwork is released. I think that would be so good for speed, stability, and simplicity without the Snap drama to hold it back.

I wish Mint would just focus on Debian and that way they could release faster updates and focus more on Mint improvements rather than a Debian AND Canonical version.

Although I think Snaps have a place and might be the solution long-term to package management especially as they optimize their speed and coding (and processors become faster), they should not make it more difficult to use the OS which is what I am experiencing.

I have no faith in this ever happening and there's a very simple reason why I have no faith in that. Look first at the date of this comment, then look at who it is that made the comment. Finally contemplate the current year we are in and the fact this has still not been dealt with. The comment?

Snaps are a sh_tshow, and no one will ever convince me otherwise. They are slow, they litter the user's system, they are redundant (other methods exist which arguably work better) and they are a closed solution. The very fact that no one has managed to fix the most basic annoyance of their existence by hiding the snaps directory by adding a dot to its name and making it a hidden directory shows just how little its use is considered on a user needed basis.

After installing what I need from the boutique I always remove snaps as part of my system installation. They are a solution in search of a problem and always make things worse on any system I encounter them on. And again, despite what its advocates say I do not ever anticipate them getting better.

Considering the overlap between the Debian+MATE and Ubuntu MATE teams, I see the relationship between Debian 12 Bookworm and Ubuntu MATE 23.10(?) as being like Linux Mint and LMDE. Essentially feature parity with a different package base, and no snaps on the Debian side. You can already recreate all features on Debian+MATE, but Ubuntu MATE has better quality of life enhancements.

You can already recreate all features on Debian+MATE, but Ubuntu MATE has better quality of life enhancements.

Yes! See that's it exactly. If the Ubuntu-Mate version of Mate is applied in Debian that makes for an improved Mate desktop. Say what you want about Canonical but I appreciate that they salvaged the Linux Desktop when they did, just as Red Hat gave up on it and most of the other distros focussing on the desktop were building it based on KDE, not Gnome 2.x. Canonical is the one who took Gnome 2.x and made a different desktop out of it. Mark Shuttleworth's decision to attack and fix what they called 'papercuts' made the Gnome 2.x desktop even better.

When Martin Wimpress decided to pickup that legacy and made Ubuntu-Mate one of the best versions of the Mate desktop he inherited those efforts and made an effort to keep what was great about the Ubuntu version of the Mate desktop alive in this distro. The idea that all that refinement can make its way to Debian proper? It's a dream come true! To actually see all the little stuff that makes this such a great desktop actually used and a part of the desktop without needing to fight stuff all over to make it work, a wonderful wonderful opportunity.

I've always honestly been disappointed by the vanilla and broken versions of Mate most other distros seem to shove out the door, bringing the Ubuntu-Mate desktop to Debian ought to show the rest of the distro world how Mate should look and behave.

Yes, I'm very excited by this!

Canonical is the one who took Gnome 2.x and made a different desktop out of it.
[...]
When Martin Wimpress decided to pickup that legacy and made Ubuntu-Mate one of the best versions of the Mate desktop he inherited those efforts and made an effort to keep what was great about the Ubuntu version of the Mate desktop alive in this distro.

It seems you're implying that Canonical created MATE. Where did you get that idea?

The official Ubuntu MATE history page sure talks a lot about Arch Linux regarding the early years:

And the Wikipedia page on MATE is very sparse but makes hardly a mention of Ubuntu or Canonical:

An Argentine user of Arch Linux, named Perberos started the MATE project to fork and continue GNOME 2 in response to the negative reception of GNOME 3, which had replaced its traditional taskbar (GNOME Panel) with GNOME Shell. MATE aims to maintain and continue the latest GNOME 2 code base, frameworks, and core applications. MATE was initially announced for Debian on November 8, 2013, at its official website. MATE became an official Arch Linux community package in January 2014.

Please, if you have any specific sources, I'd like to see them. I'm interested in this history too.

I thought Canonical was interested only in their Unity desktop until ~2017. Unity was first a wrapper around GNOME 2 (I know that because I have an old live CD of Ubuntu 11.04 with Unity and GNOME 2, no GNOME 3), then it wrapped around GNOME 3, then Unity distanced itself from GNOME 3 so much that some version (Unity 8?) was alleged to actually be based around Qt.

It seems you're implying that Canonical created MATE.

I'm talking about how Canonical was the first (in my experience and use of Linux with the Gnome desktop) to break away from the earlier Gnome 1.x paradigm. Redhat and Fedora were using a large panel on the bottom of the screen with their Blue Curve themes. Canonical was the first Gnome distro that I remember to start using two panels, one on the bottom for a taskbar and another for the top of the screen with the application launcher and system tray. 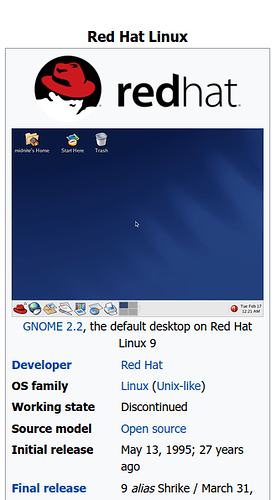 That's how the 2.x branch of the Gnome desktop looked prior to Canonical. Then with Ubuntu 4.10 came the desktop we all remember and love today: 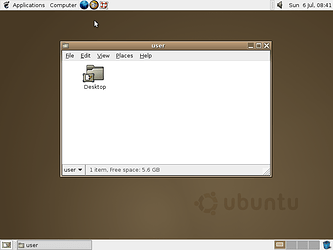 That's what I'm talking about. The move away from the fat taskbar on the bottom, which was very much a KDE thing for a long time.

When I say that Martin Wimpress picked up that legacy, I'm referring mostly to the papercuts that the Ubuntu version of Gnome 2.x benefited from greatly, not Gnome 2.x itself or even Mate Desktop. I'm talking about the way this already polished desktop was retained when Mate desktop became the Ubuntu-Mate desktop, if you understand my meaning?

While the MATE desktop wasn't created by Canonical, I would say they perfected it with Ubuntu 10.04 (in its original GNOME 2.X form), and the community continues this tradition via Ubuntu MATE. The other distros provide MATE essentially unchanged from its initial appearance in mid-2011.

The MATE desktop was forked from GNOME 2 over a 6-month period in 2011 by German "Perberos" Perugorria, an Argentine programmer who worked on Arch. Linux Mint provided assistance, and was the first distro to feature it later that year.

What I like about MATE is the history and heritage from GNOME 2.X's popularity, and how flexible it is. I can make the desktop environment look like Windows, MAC OS, Unity or any other combination without exceeding 1GB of RAM in daily use, any time I want.

My Mate Desktops look like gnome 2. I want Linux to look like Linux, nothing else. I have three laptops, Ubuntu Mate, Mint Mate and Parrot Mate. I love the Mate Desktop. I have tried Xfce, KDE and Cinnamon for the traditional desktop, but none can beat Mate in my opinion.