Not really. I have tested dozens of distros with the MATE desktop (DEB, RPM, Arch, Slack, etc.) in the past 14 years and and I have found that Linux Mint MATE is consistently the best and easiest to work with. Ubuntu MATE has not just fallen on Distrowatch but has also become VERY memory intensive and buggy, especially the past several releases, some of which I couldn't even install on my Lenovo Thinkpad. Dedoimedo recently reviewed UM 20.04 and only gave it 6.5 out of 10 in his review.

For you. Not for everyone.

They simply show the number of times a distribution page on DistroWatch.com was accessed each day, nothing more.
https://distrowatch.com/dwres.php?resource=popularity

You can analyse trends by google (users searching for solutions or documentations on some issues - googling as we are all doing) to conclude the fallowing : 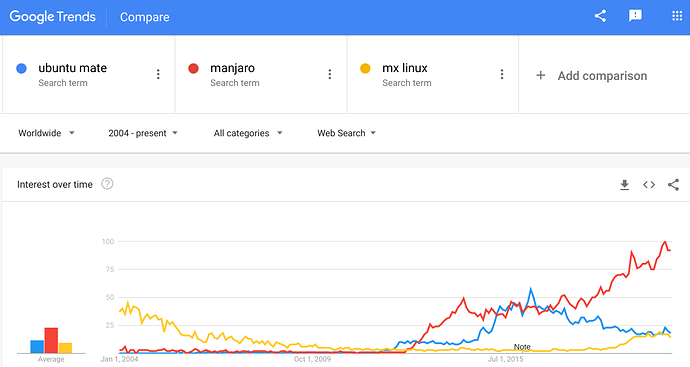 MX linux is the first entry today at distro watch. Manjaro is n2 and ubuntu mate is n41. Even that this data represents only googling around this distros, we can conclude that they have different aspect that the one of distro watch.

Get a look on that : 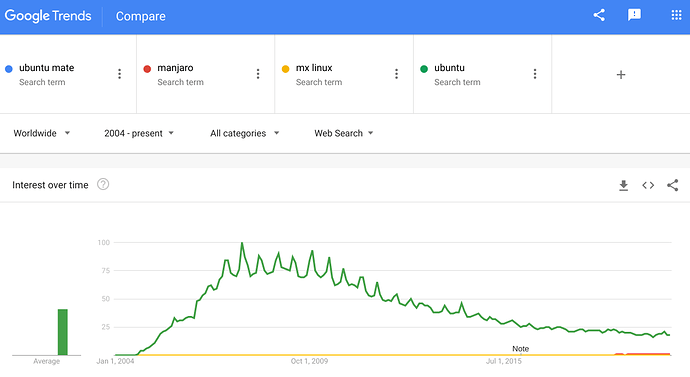 image1131×619 33.6 KB
Ubuntu is much more reviewed on the web by googlers and so its for sure more known and popular than Manjaro.

For me a OS or a distro is dying when nobody is talking about, community is silent and the development of it become useless. Up to now we are all still here guys in this community and we continue to "talk about" Ubuntu Mate, helping others, get help, give advises, make Ubuntu mate alive !

Interesting, but there are no absolute numbers attached. Also, MX Linux was first released in 2014, but according to Google "mx linux" was more popular in 2004!!! Something is wrong with that graph.

The best metric for popularity is probably forum activity: How many registered users? How many created threads and posts?

Ultimately, popularity is a bad metric to decide what is best for you. Chrome is the most popular web browser, but may not be best for you.

I found this topic a bit relate to this one :

I was browsing through the Linux Delta site (it's similar to Distrowatch), and I decided to sort the distros by "Desktop: Top Score." Any guesses? [Screenshot%20from%202019-10-12%2016-14-05] Congratulations to everyone on the Ubuntu MATE/MATE Desktop teams.

I think I can provide some perspective about Manjaro. They've developed a free, easy-to-use solution for Arch Linux which doesn't require much thought to install just to have a competent desktop. Calamares is as good as Ubiquity for an installation tool, despite the fact it's a Qt application rather than GTK, and in spite of its mixed desktop approach — which Ubuntu is purely GTK if you want it to be — it still looks quite nice. Also, the Arch User Repository is pure magic I swear. (Alright I am being facetious there but really the AUR is really really good.)

And... that leads into another point of interest against Ubuntu — its reliance on the Debian packaging format. Being a Debian derivative, Ubuntu is mired in software practices that bog down the general use experience, and while the way apt does things makes sense to an extent, there isn't anything for Ubuntu I've found which parallels solutions like Pamac, where once the system is how you want it is very get-up-and-go with respect to actually installing software. It's very no-nonsense.

The few things that Ubuntu MATE has over Manjaro MATE, is that unlike Manjaro, Ubuntu MATE is an officially-suported variant by Canonical, which also sweeps the floor post-installation; automatically-enabled Bluetooth, with Bluetooth device profiles and (correct if wrong) network configurations copied to the installation media allows when the live session ends, for usability to begin. Pair that with post-transaction preferences for software which make sense (such as TeamViewer having teamviewerd automatically enabled) and another win for pre-installation with Secureboot compatibility, Ubuntu like-for-like kills Manjaro dead for the average user, if both were to be used side-by-side.

But then... Some software, like the LADSPA PulseAudio EQ — Yes, the EQ I've maintained documentation here for years — hasn't been updated. I either don't know the package I am looking for, or a package with GTK3 interface support hasn't been created yet, where Pamac builds it for me. And sometimes, certain software flat-out doesn't work. Can i install projectM-pulseaudio and use it today on Ubuntu? Haven't check, but given how little attention that has been given I'd bet not. Combine that with an inferior update solution usually requiring multiple frontends for less technical users if dealing in FlatPak and Snap, and you don't just get update fatigue — you get update hostility.

I recall earlier I've written about Iriun Webcam not working in Ubuntu. That's been resolved recently — I don't know what had changed to allow for that but I can now use a SecureBoot instance of Ubuntu and have that software function, but only if I am hardwired on the same AP I am remotely transmitting video to. (This applies to Manjaro too last I checked, but bear with me) that kind of failure, even though it isn't fault of the system causes people to fault the system anyway.

The worst part is that this can't be fixed by Canonical alone. Things inherent with Debian is what's killing Ubuntu. As someone who recently tried and committed to Manjaro, after using a Debian system for eleven years, it just feels ancient compared to Arch. If Debian doesn't change drastically any time soon, Ubuntu will die with it.

If Debian is the problem you say it is, explain MX Linux

The problem I have with Debian is the lack of ability to easily build something with a single click. Even as an eleven-year Debian user I still don't know how to build my own software. That simply comes down to ignorance, but also choosing, if there is a package for software, to simply install the package... Even if that means installing dependency PPAs and using packages outdated for my system.

...Look, I don't want to be a mouthpiece in support of Arch here, but it's really, really hard to not be when I've seen how braindead-simple it is to use an AUR helper

which by its purpose makes use of the Arch build system. It truly is braindead. Click button, build package.

Even if to build requires a bunch of packages, I don't need to read a guide, see a readme or be confused by a bunch of procedures I don't feel like learning just to have a piece of software I want.

For people who don't want to deal with snap or flatpak that's beyond glorious.

It's about as simple as it gets without unnecessarily patronizing the end-user. My issue is that after eleven years there hasn't been something like this which made waves in major pro-Ubuntu publications. Unless you can tell me of such?

It is often recommended to learn how to use a terminal first, before using helper GUIs which Arch development do not necessarily support.

There is no official support you will receive on an Arch forum about software completely unrelated to the system which was built with software acquired from the Arch User Repository. Even if said software caused system instability there will be absolutely no support given depending on circumstances and what software had been affected. Use of the AUR effectively means you are on your own.

If you want FlatPak and Snap packages, then the solution which comes preinstalled on Manjaro — Pamac Manager — has plugins for it. Again, however the last two caveats described above still applies, even though they are safer to use by design.

The Arch/AUR/etc. concept is a totally different paradigm to what Ubuntu is. Ubuntu is based on Debian, a version/repo paradigm (plus snaps). If you really need to use the latest bleeding edge software, or something not provided in a PPA, just use Arch or Manjaro or some such.

Then why are you suggesting that Ubuntu needs this kind of a feature? It's just not what Ubuntu is, or aspires to be. It is not going to happen.

All of what you say there is a legitimate position to hold if the massive software availability in Arch derivatives like Manjaro is what floats your boat. It's what floats my boat as it happens. So, you don't need to convince me.

MX Linux is also a very popular distro - up there with the likes of Manjaro in terms of popularity. So, clearly, your position on Debian is not a position shared by a large number of consumers.

As for me, I am a gadfly. Half the time, I feel like you about arch derivatives like Manjaro. That is to say, I absolutely love it. Half the time not (usually when one of its rolling updates messes something up). On such occasions, I usually retreat back to a Debian distro. Currently, that is MX linux. But, I can feel myself getting itchy feet again. So, will probably install Manjaro again in the coming weeks.

Each to their own.