I don’t think the statistics of one website accurately represents the popularity of Linux distributions, and I’d be surprised if the developers care much about that, either.

As for 5 or 10 years from now, I think it’s best to refer to the old saying “predictions are hard, especially about the future” …

My growing issue, not just with relying on Ubuntu Mate, but with relying on any integrated system, is when it takes a turn I am not happy with. This is not, in itself, a criticism. Just a personal preference for having full control of what I have on my screen.

As a consequence, of late, I have been building my own, semi-bespoke Linux setups in VMs so that, if and when I get to a point where none of the fully formed distros suit me anymore, I am always going to be able to construct what I want.

I tend to use Manjaro for my VM experiments mentioned above. The reason being, using an Arch base (including the AUR community repos), the amount of software available is truly mind boggling. Both in terms of breadth and also, crucially for me, in terms of depth. By depth, I mean you can usually find several historical versions of a given app and/or any current fork of it such that if the devs take a wrong turn (in my opinion) on a given app, I know I can virtually always easily get the version I like installed instead.

Currently, I am experimenting with Openbox window manager and LXDE panels. But, with a special panel menu based on the Openbox menu - but having it statically placed on the panel like a normal panel menu and using “Obmenu” menu editor to set up the menu exactly as I like it. I use PCmanFM to manage the desktop. So, nearly LXDE - but not quite.

It’s fantastically light at around 250MB on the RAM and looks like it would serve all of my needs.

I’ve just got it there in the background as an insurance policy.

Having said all of the above, Arch, even via the relative hand-holding of Manjaro, is not for everyone as it really does allow you to screw things up quite easily. So, as things stand, for an out of the box Mate desktop for people who just want the thing to work and are not interested in deep-tweaking, Ubuntu mate is the best available distro. For a very close second-best alternative, I would recommend Mint Mate. Indeed, some parts of Mint Mate are superior in my opinion. But, that is, I would argue, more to do with the underlying Mint system apps as opposed to the Mate desktop. Then again, there are some things that UM does outstandingly such as the Software Boutique. It’s a close call.

The results on Distrowatch are generally meaningless as a metric. They don’t capture other routes to finding Ubuntu MATE or any other district. It is only a hit counter on a single site.

I would agree with that Skellat. It wouldn’t surprise me if the majority of newbie uptake on a given Linux distro is via word of mouth and personal recommendation

Yeah, Distrowatch is not a good metric of long-term anything: it’s good to see what’s currently popular.

Sure, Ubuntu MATE might be a “niche” distro, but the base (Ubuntu) will be around for a while, and the desktop (MATE) has been around for far longer (under a different name, but same code base).

So even if Ubuntu MATE, specifically, were to one day disappear, well, meh. Someone will create a new spin on Ubuntu + MATE Desktop, or not, and we will all find a way to move on. There’s also plenty of distro bases (Debian, Fedora, Arch, and many others), so there will be no lack of MATE-based distros.

If you’re concerned about the 5-10 year span, stick to an LTS and at the very least your underlying system will be supported for a while more or less as-is. The Linux Desktop ecosystem changes enough that in 10 years time you might have entirely different concerns, and even if MATE is no more (which I doubt), you will have replacements available.

I do not see any reason why UM should go away, it’s based on Ubuntu which may grow to even greater prominence with the IBM Redhat deal, and its being developed at a rate much faster than xfce which has not gone anywhere, and is actually seeing a broader adoption for example the switch of trisquel linux to the MATE desktop from Gnome, it currently is seeing progress in the development of the ability to use Wayland I would be very surprised if it’s not here 10 or even 20 years, with a lot of improvements, but still here

Surely it all depends on how many developers and users the project can attract and retain. They are the people who make it happen.

It is unreasonable to think that you will attract new (young?) developers to a project that does not evolve. It is becoming more prevalent to try to find some way of paying developers for at least a part of what they do (see Ubuntu-Mate bug-bounties etc., elementry’s application store).

Wimpy seems to me to be pursuing a well considered development path. Parts of the project which use older toolkits (did I get that right?) are being migrated to their more modern equivalents so that they stay relevant - that should help to make the project attractive to new developers.

What we the users of Ubuntu-Mate can do is to support the project financially. I can’t write code, but I can make a contribution. If everyone who can afford to, paid the recommended contribution when they install Ubuntu-Mate on a computer the project would be on a firm financial footing. Becoming a Patreon supporter is probably even better.

Summary
Wimpy seems to be steering the project into the technological future, so it should remain relevant to developers.
Wimpy is using project funds to pay developers for work on certain parts of the project.
We can:
(a) take over the advertising (word of mouth etc.)
(b) help provide financial resources

If anyone still thinks that Free Software means you always get it without paying, I recommend the following clarification:
https://www.gnu.org/philosophy/selling.html

We all have a part to play.

Distrowatch does not reflect real usage statistics.
But it is a great site as it have search for distributions and packages, distro comparison and news with reviews.

MATE desktop is completely alive and it is available even in CentOS 7 from EPEL repository: 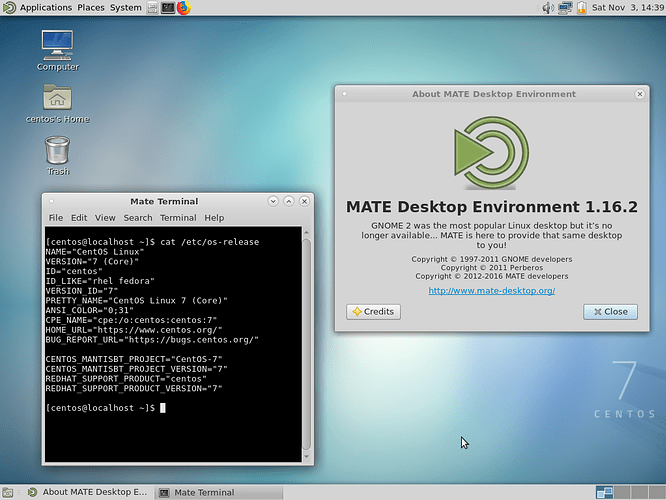 Ubuntu MATE is completely alive because of nice-looking desktop and big amount of packages.
We are currently running about 100 LTSP fat machines with UM 16.04 LTS on Intel Atoms, Core2Duos and modern i7. Almost all Greece running LTSP with Ubuntu MATE.

My totally anecdotal experience: I torrent a few ISOs (I figure that's the best way I can help), and currently have Lubuntu, Xubuntu and Ubuntu MATE 18.10, UM has the highest ratio. That's gotta have some validity. 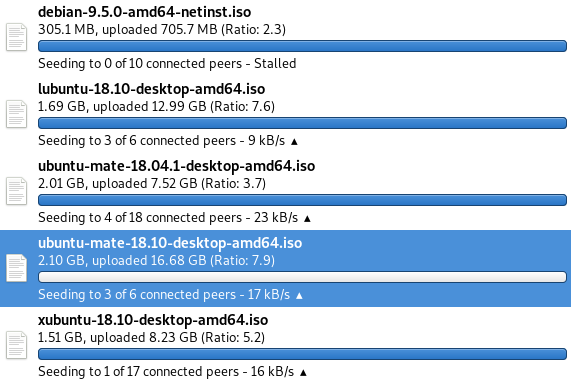 I think Ubuntu mate is doing just fine, I have used Ubuntu for many years and switched to Mate about a year ago and just love how it run

I generally recommend new users try Ubuntu MATE or LinuxMint MATE for their first Linux experience, and most of them never try anything else. What are the “numbers” for LM MATE?

I first adopted Mate on Linux Mint. I had switched to Mint specifically for Mate, as Ubuntu had not yet embraced Mate. Then when Ubuntu Mate came along, I switched to that mostly for convenience.

My point is that that Mate was around before Ubuntu embraced it, and if at some future date Ubuntu decides to drop it due to lack of popularity, then Mate fans can pick an alternate distro (including those derived from Ubuntu, like Mint) that continue to support Mate. Or who knows, in 10 years, something currently non-existent may come along that knocks all our socks off, and Mate will join the dustbin of once-great environments that no one cares about any longer.

I guess distrowatch accurately shows downloads, not number of users. There’s a heck of a lot of distro hoppers out there forever downloading distros. I’m new here but it’s clear that it’s a settled community that would continue even if UM was not in the top 100…

I am a big fan of hot corners, and only use compiz for that reason. I’d be interested in the future if this distro had a resource light hot corner option of it’s own. I also like the wallpaper changer in lxle. ICE in peppermint is also quite cool. First impressions are that this distro doesn’t need major innovations, just small tweaks here and there in response to user wishes

Distro Watch doesn’t show distro downloads or number of distro users. So far as I am aware, it simply shows the number of people visiting specific distro information pages on Distro Watch. To that extent it is, at best, a very indirect index of interest in any given distro.

I am a big fan of hot corners, and only use compiz for that reason. I’d be interested in the future if this distro had a resource light hot corner option of it’s own.

I don’t know about the wallpaper changer but I had wrote a guide about an option which allows for the above on Marco and Compton.

Ubuntu MATE is now sitting at #42 on Distrowatch as it continues to drop in popularity. Obviously there are better distros out there to choose from at this point in time.

'More popular' does not equal 'better', and there is some ambiguity about how accurately whatever-it-is that DistroWatch measures maps to actual usage. In any case, there is no 'better' that is 'obviously better' for everyone's use case and preferences.

I think a lot of what DW measures is 'ooh shiny' and novelty, and the effectiveness of marketing and PR. MATE is best for me, and UM is about the best MATE implementation that I've found.

DistroWatch Is Manipulating You, So Let's Fix The Rankings!