Hi,
I am running ubunutu mate 21.10 . I have installed two big ssd disks. But to use them I first have to go to caja and mount them by clicking on them.
Why doesnt it automount internal ssd disks?

Second, I cant find a way to make them automount, except for vi and fstab, which is not so userfriendly.

Found this but this doesnt do anything:
gsettings set org.mate.media-handling automount true

Welcome to the Ubuntu-MATE community

About automounting, there is a graphical way to do that.

Open a terminal and type (or cut & paste)

It will be known in the menu and in the configuration-centre as 'disks'
CLick on it and there you can select a disk and by clicking on the 'cogs' icon you can change the mount options.

Disks should already be installed, unless the OP explicitly uninstalled it, so the procedure should be even simpler.

Internal SSDs are fixed drives using IDE/SATA/SAS/NVME/PCI-E/what-ever-else fixed interface.
For me it is expected that they do not automount.
Automount works normally for removable drives like USBs.

If you want automount for fixed drives, then add them to /etc/fstab.
Consult with this wiki page about syntax.

I want them to be automatically and always mounted. They are not. Why not?

I made a mistake, ubunutu mate doesnt mount my sata drives, I typed ssd drives. Sorry about that.

Here is some kernel logging. As you can see kernel first detects my internal ssd disk and mounts it.

After that it detect two sata disks, but does not mount them. Why not?

Arent sata drives supposed to be mounted by default?

Hi, I have solved this by hand by adding to fstab

First of all: Linux is NOT Windows

This is last millenium stuff.

The fact that it is 'last millennium' does not equal to 'good practice'.

I am not going to put this up for discussion but take it from me, or rather find out for yourself, that willy-nilly automounting filesystems on fixed drives is 'bad practice'.

The fact that Linux doesn't automount filesystems on fixed drives is on purpose, not because it can't.

You will see that if you mark the drives as removable in your BIOS (as if they were in a caddy) they will be automounted.

As far as i can see from the UUID, one of your fixed drives is formatted in MS-Windows and probably has an NTFS partition ? Would you really have it automounted ? What about permissions (which NTFS does not support) ?

I think it is rather user-unfriendy to let users shoot themselves in the foot with automounting filesystems on every fixed disk. I know I certainly would not tolerate any system that would do that.

Your filemanager (Caja) detects the disks anyway and presents them in the sidepanel ready to be mounted with one click. That is perfectly fine and user-friendly and it should not go even one step further than that.

Again, I am not going to discuss the why or why not. If you do some research yourself, you will find the answer anyway.

Thank you for clearing up the why. I have been using Linux since floppy-disk firewalls and did not know that.

Second, if that is the policy it would be an improvement if caja, or some other Linux part, which presents buttons to mount the disks, would add an option:

That would have helped me. And sure ntfs is not ideal, but it could do that with the ext4 partition.

User friendly means to make things easy. Adding partitions on fixed disks to your system should not be a puzzle. 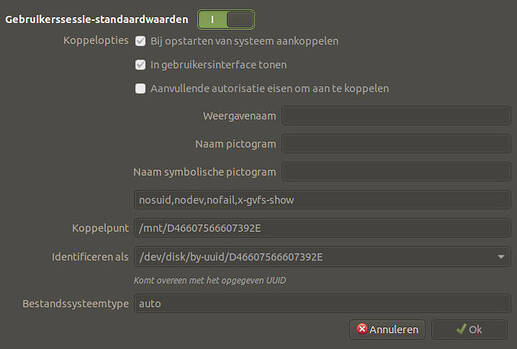 wow, thanks!
This has been evading me for 2 years now

Hope it will help people searching for this . This is the solution I was looking for.