What are the Ubuntu Firefox modifications about?

I noticed this in the Firefox extensions: 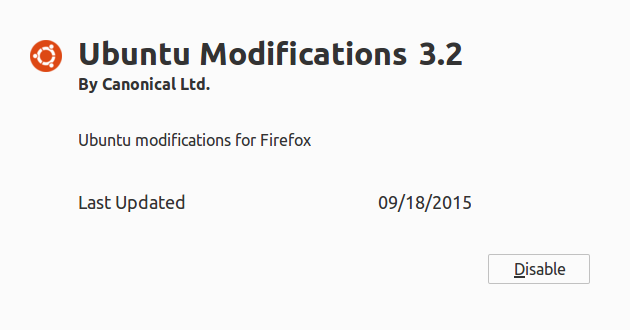 Does anyone know more about it? Usually there is at least a settings or preferences button to learn about a particular extension. In this case I can only click on disable.

Integrates the browser with Ubuntu to:

Now Firefox is at version 54, this release is the first to run Firefox using multiple processes for web page content, and from version 57 (end of 2017), only web extensions will be supported.
So the xpcom (xpi) extensions will no longer be supported, unless their developers are keen to turn them into web extentions.
In addition to the problem of having to rewrite everything from scratch, developers have also the limit that Web Extensions do not provide all the XPCOM capabilities and therefore not everything is “translatable” in the new system.

So, let’s just say goodbye to so many useful extensions …

Multiprocess doesn’t activate if there are add-ons with xpi extentions.
This add-on is to see which are compatible with the multiprocess:
Add-on Compatibility Reporter

Ubuntu modification is an extension that prevents multiprocess activation.
You can disable and then uninstall it via synaptic (search ubufox and remove xul-ext-ubufox).

Imho that of Mozilla was a foolish choice:
if you need an add-on that will not be updated to web-extention, eg DownThemAll, you will have to install Palemon (a fork of Mozilla Firefox)

On 16.04, to remove this package, Synaptic has also eliminated ubuntu-mate-core.

But even though I open multiple tabs and windows in Firefox, I see only 2 processes in the system monitor, Firefox and Web Content (Check show dependencies): is it normal so?

Other two links:
how to enable multiprocess

Multi-Process Firefox: everything you need to know - gHacks Tech News

After years of development and several delays, multi-process Firefox, also known as Electrolysis or e10S, is about to be enabled for Firefox stable users.