I read in the changelog marco is the only and default window manager in 20.04 and:

No, it's definitely not! I've massive screen tearing everywhere! Videos, during firefox smooth scrolling etc.
I've used compiz to solve this issue before but now...

Can u give me any solution?
Thank you!

Thank you!
I read somewhere this config file may cause more ram usage and performance impact. Is is true?

Possible, but I think it should not be that big of a deal. Just try it out.

Btw. on my GTX 1050Ti I also had to to force full compositing pipeline in the drivers to get rid of tearing.
I think the release notes are overselling it a bit - maybe on AMD everything is fine, but on Intel and NVidia both not so much...

I have the same problem---I experience screen tearing when I watch Youtube videos, Amazon Prime video, etc. I tried applying the 20-intel.conf thing as suggested in https://askubuntu.com/questions/418398/tear-free-disabled-in-intel-graphics-tearing-in-xubuntu#469653. This fixes the above mentioned problems but it crashes mpv and vlc.

For VLC you can maybe try a different video output mode.

Thank you maximuscore, I tried lecacy video output (xv) for mpv, which is now working. By the way from mpv's manual I learned it has video output "caca". I tried it, and this was hilarious---as it is intended to be---hahaha.

in /etc/modprobe.d/nvidia-drm-nomodeset.conf doesn't fix screen tearing.
Something get wrong with 20.04
On 18.04.4 i don't have this issue...

I used compiz to negate screen tearing. Macro had too much screen tearing in vlc/mpv. Now it's smooth as butter. I'm using default modestting driver for my intel iGPU.

So I have an odd issue with this. It does, in fact, get rid of the screen tearing.

But now Cura segfaults every time I go to launch it.

And Slic3r apparently does the same thing. It's less verbose, so I don't actually know if it's a segfault, but it launches, freezes, and quits.

Thanks a lot. That fixed my tearing issue.

Worked for me to get rid of screen tearing in firefox (e.g. youtube)! Thank you very much.

Accepted solution here causes much more issues in applications such as celluloid, mpv and brave browser. This seems to break brave completely making it impossible to minimize or resize.

I installed compton and old Marco(Compton) option showed after that. It seems to fix all screen tearing issues for me (I have an Intel iGPU). In an another machine option didnt show up in mate-tweak-tool so I used Marco(No compositing) option and added compton to startup manually.

Wow this has been annoying me for months and your solution solved it! That should be the default setting! Thanks!

I'll bump this thread and may as well describe my problem before trying to fix it with what may not be the solution!

Ever since I upgraded to 20.04, I switched to Mate as Gnome flashback no longer worked properly. Not sure if it was related to mate specifically, but youtube has always had bizarre issues with something, but not exactly screen tearing. Below is an image to show what I mean. 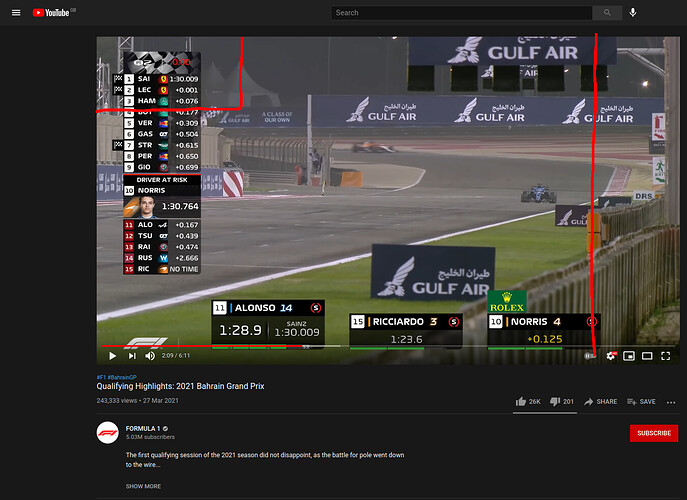 The problem isn't so noticeable during motion in a busy scene that much, but the 2 areas I've highlighted are an area that suffer most often. Basically, I get what look like very faint filters in these boxes I have highlighted making the image that bit darker. If the video has a section with that part all one colour with a bit of motion, the box at the top left is very obvious. As is the much larger box on the right. If paused, these lines/boxes go. They also go briefly when taking a screenshot! They can vary in size and position, but mostly occur at the size and position i have shown. They are less visible and in a different location when in full screen.

An important note to make - I use firefox and this never happens in chrome on youtube. I also never actually get tearing in firefox on youtube so I don't know what this problem is.

On the topic of tearing, Ubuntu IMO seems to have got far worse with it. Back on 14 and 16.04, I used a DVB PCTV stick and the interlaced freeview footage actually worked well with VLC. Ever since 18.04, most video players are terrible at handling footage that isn't de interlaced. I've recently got my tv stick working again with kaffeine, but it looks terrible whenever there is any motion. News text moving horizontally is almost unreadable when playing the video.

Something else that I have a problem with most media players is as this screenshot shows: 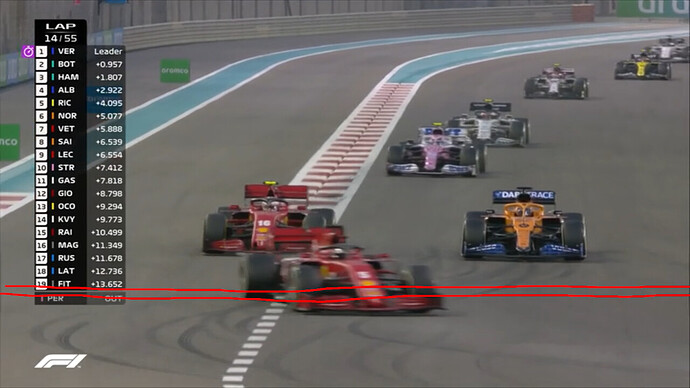 This is playing a recorded video on my PC using MPV, but it is the same on almost all programs. The area I have highlighted in red is what seems to tear almost every time the picture has horizontal movement. It is always in roughly the area between the two red lines. So a chunky bar that looks like it is slightly separated from the rest of the image during movement. I assume this is tearing? VLC does this too since the upgrade to 18.04 and now about the only player that doesn't is Mplayer. This is an incredibly dated program that I use through SMplayer. It has it's disadvantages, but it is about the only one i can watch without having this bar appear during horizontal motion.

Which of the mentioned methods may help sort these issues out? For years I don't seem to have been able to watch videos without some form of tearing or interlace issues. But has got worse with 20.04.