? How can that be. Linux didn’t even do anything to your wifi and bluetooth that a power cycle can’t fix. Sounds like you have failing hardware.

I have turned the machine on and off probably 20 times during this episode. Sometimes with my original 120GB SSD drive, sometimes with my new 250GB drive. I clone my original W7 drive over to the new drive, so both drives should be identical. The WiFi and Bluetooth used to work with the original drive, they don’t now.

Yes, it could be failing hardware, BUT what are the chances that both of them failed to work under Windows, BUT I can get the bluetooth to work under MATE.

I am not trying to bash UM, I am desperately trying to get it to work and all the other people on this thread are doing their best also.

Meanwhile Ubuntu has gotten its hands on the Broadcom board and now neither WiFi or Bluetooth work in Windows last time I checked.

Have you checked your BIOS settings or did you make any changes there?: 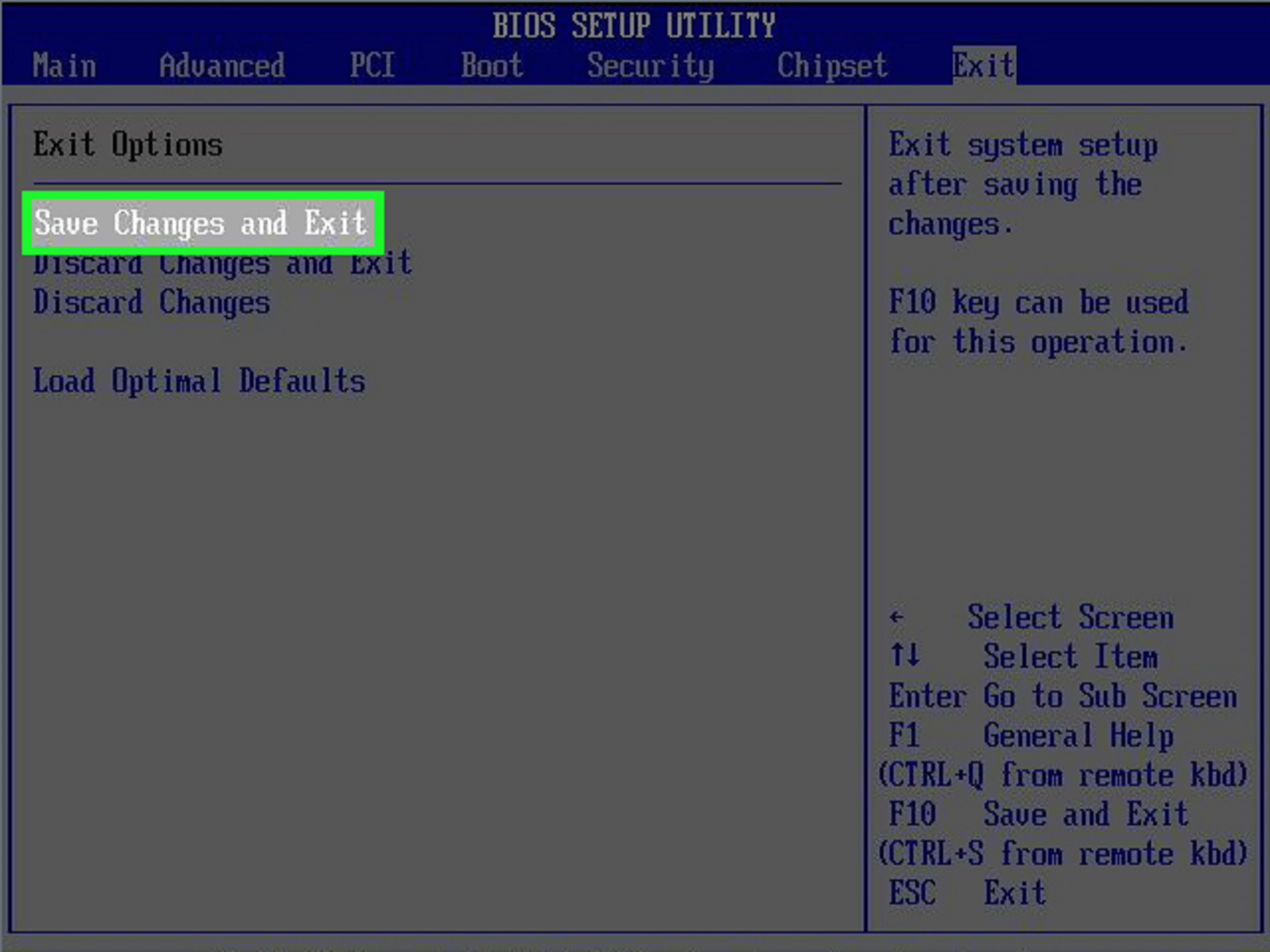 How to Change Computer BIOS Settings

This wikiHow teaches you how to access and modify your Windows computer's BIOS page. The BIOS is a set of built-in options that allows you to change system aspects like the data and time. Since the BIOS is tied to a computer's motherboard,...

I have backed off even further and have switched from the dual boot on an SSD to MATE installation on a normal HD. Maybe this should be a new topic, if any of you think so please move it; since I do not know how to do that.

I built my install USB with unetbootin (previously using rufus) used the i386 version because the nx6325 can only use 2.87GB of the 4GB ram. (Apparent bug in the BIOS, which they never fixed.)

Everything went according to plan (I did not do any additional partitioning) as I let the program handle the whole thing. BUT, when I got to the time to reboot to use your new system, it shut down with the power light and the sound off LEDs illuminated, as well as the hard drive spinning and the fan occasionally turning on to cool the system.

I went to the Magic SysRq key set as instructed by @ouroumov previously and it would not respond to any of the commands. I tried p, t and o both with and without the blue Fn key held down, always holding Alt and SysRq keys. So I gave up and held down the power key until it turned off.

I started it back up and it has been constantly accessing the HD with a black screen. It has been doing that the whole time I have been entering this message.

Then I restarted a live session and it booted up to the welcome screen. The only thing I did was have it find my Bluetooth mouse and then did a shutdown using the top right icon. It shut down normally.

Next I booted up again and chose Boot from first hard drive. It started loading and then executed lots of commands and ended up as below: 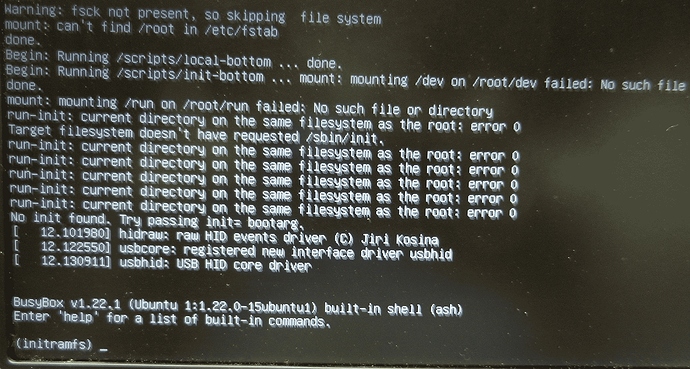 Notice all the errors. I am obviously totally lost.
Help, please. -- fey42

Have you tried running “dpkg” (a network cable connection is required) per the update guide?:

I did not test it, since it is brand spanking new. But nothing hick-upped as it was installing. How do I do that, back in Windows or live? I have been reading your tome “Ubuntu beginners guide” and didn’t see that step. I missed it somehow.

Next, have I gone too far since I have not managed ever to establish WiFi from a live session? (from your guide).

Last my nx6325 meets all of the “recommended requirement” except it is a 4X3 screen with 1400X1050 resolution. Which most older laptops will have a 4X3 screen.

Thanks, Fred
PS, Just checked the USB in Windows (chkdsk) it was fine.

Just ran check disk from the Unetbootin splash screen and it was fine.

Have you checked your BIOS settings or did you make any changes there?:

Sorry wolfman, I missed your post earlier. Yes I checked my BIOS settings and even changed them back and forth to cycle them. It did not help.

BUT, in the meantime in Windows 7 I have managed to get the Wifi backup and running. HP never wrote drivers for 7, so we have to use drivers for Vista. It reported that both the WiFi and the Bluetooth were turned off. Got Wifi up, but not Bluetooth yet.

Since I have dropped out the dual boot “need”, I’m not working on that now.

Have you tried running “dpkg” (a network cable connection is required) per the update guide?:

Do I need to do this since I am installing LTS and not updating?

It still does not show any WiFi networks available. I seem to be chasing my tail, since this is where I started out in a previous thread and went to installing instead vs. live USB thinking that might be the problem.

@larryb showed me the rfkill sequence to make sure everything is up, so I ran it and below are the results. Does this require a reboot or should it take effect after it is issued?

I found this in the Official Ubuntu Documentation MATE 16.04: under Wireless network troubleshooting

“Click the network menu on the menu bar and make sure that the Enable Wireless setting is checked.”

I assume the menu bar is the bar across the top and the network menu is the symbol that shows whether you are connected. If so, there is no Enable Wireless setting to check. I also looked other places and could not find it. Perhaps the documentation is lagging the actual OS? Perhaps I am too dense to use MATE?

Do I need to do this since I am installing LTS and not updating?

yes!, run “dpkg”, it doesn’t matter what version you have as it can help solve problems of any Ubuntu based distro!.

Did you read my post #33, where I managed to captured a bunch of errors?

Maybe this thread is so long and convoluted that it needs to be broken into two different threads? It is my fault for pursuing two problems simultaneous. As @wolfman said in his guide (sort of) prove it will run in a live session before you proceed.

Is it maybe better to back up to the previous numbered release and see if it will work? I’m open to suggestions.

yes!, run “dpkg”, it doesn’t matter what version you have as it can help solve problems of any Ubuntu based dist

Off to do it, cross your fingers.

That means I need to do an install and ignore the boot message at the end of install correct?

Is that different than “Download updates while Installing”?
I am not doing that, just a question.
Thanks

@wolfman
Problem 1: I can’t reboot since that freezes the computer.
So I told it not to reboot by shutting down the reboot screen request.

Problem 2: Reading the Update guide doesn’t give me the slightest clue on how to go about doing what it says. I can’t find Advanced Option > Recovery Mode. Is it maybe Software Updater or Software & Updates in this version?

From Update Guide:
Immediately after installing your system I recommend booting into “Advanced Options” > “Recovery Mode” (don’t do a first boot but boot straight into “Advanced Options” > “Recovery Mode”) and running “dpkg”_
_ see below in “Fixing Broken Packages” about cable connection as this _
_will only work with a network cable connected), once you have run dpkg; _
and you re-boot, set your “Software Sources” (see below) list and update again
_ due to the changes made to the software sources lists!!. (I know this _
_may sound strange but its something I found that seems to work well for _
me!.)

I tried running grub, it wasn’t installed, so I installed it, but that does not bring up the menu shown in the Guide. Remember I am a fish swimming in strange waters.

do you only have Ubuntu Mate installed?, this would account for the lack of GRUB menu, when booting, press the “Shift Key” and the menu should appear!.