I first tried letting MATE (i386) do the partitioning, but the advanced formatting options would not come up. So I dropped back to Windows and did the partitioning there instead.

Booted into Ubuntu (from a live USB stick), did the install, chose the two update options at the beginning, answered all the questions (location, keyboard). Let it run
to completion and tried to shut down. It shut down, but left the power
button lit and the sound mute button on. I waited 5 minutes, with no disk or memory action – then

Held down power til it turned off, restarted and it never made it to the chose which OS. Instead I was greeted by
error attempted to read or write outside of ‘hd0’
entering rescue mode
grub rescue> _

Figuring I screwed up by forcing the shut down I tried it again and it shut down this time, but still the same error message.

Did a bunch of searching and found somewhere “it might be” doing the install from a live USB. So I tried installing with option 1 (updates I think) which gave me anther error – failed trying to update old packages – or something like that.

Next I tried option 2 – erase MATE and reinstall – which gave me the same error message.

What to do is my question to get past this?

Did you install MS Windows first and UM second?

If so, can you confirm the exact version of windows and UM and I will do a dummy run inside a virtual machine and see if there are any issues

On the other hand, if you have managed to install both of then, but grub is misbehaving, have you tried booting in with a Live Um disc and then installing and running Boot Repair?

You can install and run boot repair from a live session by typing the following into a terminal:

Make sure your live CD is the same architecture as your installed UM OS.

Did you install MS Windows first and UM second?

If so, can you confirm the exact version of windows and UM and I will do a dummy run inside a virtual machine and see if there are any issues

At this point I can’t prove I have either installed. I will fire it back up and try your “magic”

The first two commands worked. the last one gave this: 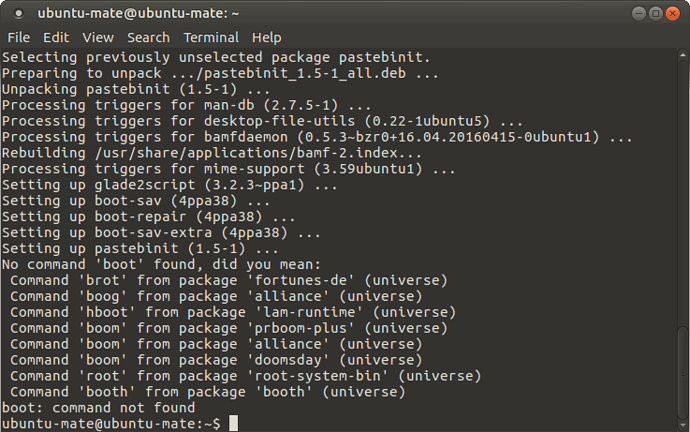 Sorry, I just learned how to get the whole session.
Here is the total run:

You added a space before the dash.

You added a space before the dash.

Hate it when computer do what I tell them and not what I want
Went through the gyrations and here is where I am.
I need to knock off and pick up someone at the airport.

The Configuring grub screen did not pop up 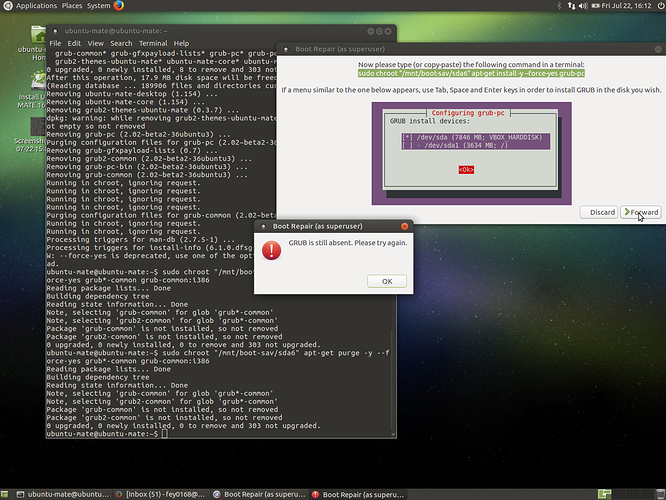 Okay, what do you say we start fresh?

PS: I’ve edited the title of this thread to better reflect the issue at hand.

have you also taken a look at the partitioning guide?:

Linux beginners should also look here: You can only partition on an unmounted drive using an installation disk of your Linux flavour with a partitioning tool included, use the Gparted tool in live mode, or you can download a copy of Gparted from the link below and create your own Gparted disk: http://gparted.org/download.php WARNING BEFORE YOU START TO PARTITION YOUR DRIVE: MAKE SURE YOU DEFRAGMENT YOUR WINDOWS DRIVE BEFORE YOU START RESIZING THE WINDOWS PARTITION AS IT MAY WELL LEAD …

@BlueAlchemy17, if you have any advice that will help others, be all means share it so it will help everyone!. What tips do you have?.

Restore the drive from your Windows-only backup image
Resize, using Windows, the partitions to make room for Linux (Something like 120GB free space)
Boot the live USB, run the command lsblk in a terminal and give us the output of that command
While we’re at it, provide the output of the command: inxi -ACDSMNGI
Not do anything else

Did all of the above.

have you also taken a look at the partitioning guide?:

I am trying to see if Lunix has made it to the point of being a somewhat hands off install and so far it is not looking good. I am letting the “Install Ubuntu Mate” handle everything and it wouldn’t even partition the disk properly. I had to do it back in windows, which is very easy. I seriously want to get away from Windows…

Or else it is me not understanding the verbiage. Couldn’t be that

I can honestly say I have found Ubuntu Mate to be a hands off install.

I already run a dual win7/UM dual boot, but I am also going to run this as a simulation in virtual box with the latest UM and video it and see if I can replicate any of your issues.

I can honestly say I have found Ubuntu Mate to be a hands off install.

I already run a dual win7/UM dual boot, but I am also going to run this as a simulation in virtual box with the latest UM and video it and see if I can replicate any of your issues.

You can see this is an older machine and it is an AMD. In my research I read that if you want the best experience stick with Intel.

Besides this dual boot problem, it can’t find WiFi, loses the Bluetooth mouse, doesn’t shut down without throwing out an error message about some process still running, Firefox also has constant error messages about a non-responsive script, the fan runs constantly at high speed and MATE Terminal does not use standard keyboard shortcuts (why?).

This is from only using it sporadically for 2 hours. I have tried both live CD and live USB.

In my long years of experience running simulators they never give accurate results; they try to, but they fail. Nothing beats the real thing.

How old is your machine and what is its precise specification please?

How old is your machine and what is its precise specification please?

Look back at message 10, I did a inxi -ACDSMNGI for @ouronmov

Okay, having looked up your model on a few sites, I would say. (though others may disagree), that your machine is pushing it to work well with Ubuntu Mate. If it were me, I would use Lubuntu. Indeed, I do use Lubuntu on both my notepad and laptop. The laptop being an old Acer Aspire and the Notepad being an Acer ONE. I use UM on my main rig.

I realize this is a side issue to your initial OP. But, I thought I would mention it.

Okay, having looked up your model on a few sites, I would say. (though others may disagree), that your machine is pushing it to work well with Ubuntu Mate.

I thought it would be a good one, since it handles Windows 7 32bit Pro absolutely perfect. From the “press” I read it sounded as though it would be fine. But I know nothing and freely admit it. Total Lunix NOOB.

ouronmov, wolfman would you both please weigh in on this. I do not want to beat a dead horse and be spinning every bodies wheels for naught.

Thanks for you opinion, let’s see if we get a consensus. I will switch, not a problem.

Yes, definitely don’t just take my word on it. I am sure other will give their opinion.

(though others may disagree)

So what is the major difference between the two or is that a hard comparison?

They both use a traditional desktop metaphor. However, with some light tweaking, Lubuntu can be made to look and feel like UM.

Lubuntu’s biggest drawback is that the main menu is well-nigh impossible to edit for a new Linux user. So, wherever Lubuntu decides to place your newly installed application in the main menu (which is usually a sensible choice, by the way), you will need to live with that choice.

In performance terms, Lubuntu is very lightweight compared to pretty much any other mainstream Linux distro out there which is why I run it on my old notepad and laptop.