There is a bug in GVFS in Ubuntu 16.04. GVFS is the thing that Caja and Nautilus use to access/manipulate files. Currently in Ubuntu MATE 16.04 moving any more than a few files either completely freezes up the file manager or slows it down to a crawl. This bug is not limited to just Ubuntu MATE and Caja, Nautilus and other file managers derived from Nautilus are also affected.

Here is the procedure to follow to help us test the fix for a critical bug affecting Ubuntu MATE 16.04

This forum post hopefully will also give you a general idea of how to do SRU testing, since it's not an obvious process. 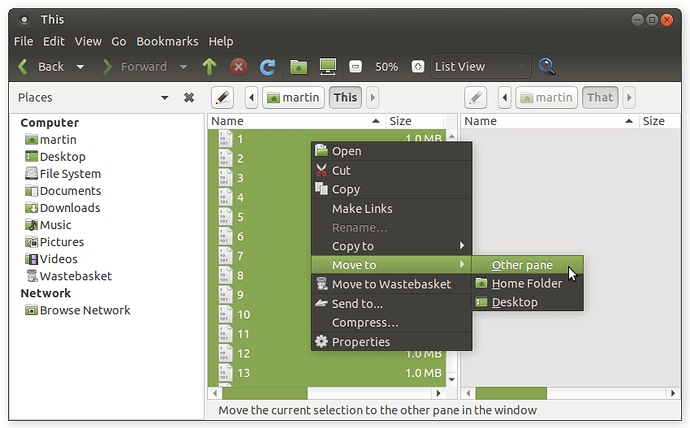 The steps listed below are derived from the indication in the following bug report:

Though, I should mention; after executing caja -q, caja then would not open. A reboot was required. But, following that reboot, all was working well and the problem with file transfers has gone. They were cut and pasted in a couple of seconds.

I’ve posted up on Launchapd

Followed your instructions to test caja and as you said, it choked. Installed gvfs/xenial-proposed, reloaded caja, ran the test case again, and caja worked. I did not see the familiar file transfer box though. As Steve remarked, the transfer was quick, I did this several times to check it. Posted on Launchpad.

Edit: As a side effect, I noticed that this also eliminated a bug that I reported about lock screen.

The same for me, I do not have the account on launchpad but I have linked this post to other 4 linux forums.

After execution of caja -q caja did not open, so I opened it via the menu and copying of the files was done in less than a second, while before the upgrade it took forever.
thanks for this upgrade, now my files transfer very much faster than before.

Yup. Fixed the issue on the one machine that I tested. will have to implement on the others.

Thank you everyone who took the time to test this and post your findings on Launchpad!

Anyone else who can help validate this fix would be welcome.

I use Thunar as my FM and it does not have any problems.

So will there be fix in the future for Caja that will come thru Software Updates ?

So will there be fix in the future for Caja that will come thru Software Updates ?

Well it’s kind of the point of what we’re doing here.
There’s a fix, we need people to help test that fix so it lands in the LTS.

I removed xenial-proposed repo and assume the gvfs packages will be happy going forward and probably sync with a future update.
EDIT: Duh! I see you have this covered. Good idea.

Tested yesterday at work and now at home, both UM 16.04 worked fine now!

maybe i should ask this in some developer forum or not at all, but i’m curious.

“Patch Description: The metabuilder stores files and data in sorted lists. An insertion into a sorted list is done in linear time, which highly affects efficiency. In order to fix this, use GSequence instead which does insertion and deletion in logarithmic time.”

can anyone explain the constructions “in linear time” and “in logarithmic time”? it sounds as though GVFS is running things as different threads or something, on the other hand it sounds like a simple case of insertions requiring a sort.

anyway i find “linear time” and “logarithmic time” to be odd usage, so i’m curious what gives, clues anyone?

…“Patch Description: The metabuilder stores files and data in sorted lists. An insertion into a sorted list is done in linear time, which highly affects efficiency. In order to fix this, use GSequence instead which does insertion and deletion in logarithmic time.”…

That might as well be in Martian to me. It would make as much sense. I aint no techno…

Either that or I am getting old…hahaha

FYI the bug cannot be reproduced with any currently supported version of Fedora that has been updated since April 2017. Fedora 25 is the oldest, so I tested with the MATE-Compiz build of that. The current build of gvfs for Fedora 25 is 1.30.4-1. If anyone is using an older EOL build of Fedora then maybe they will encounter this issue.

I had NO problem cutting and pasting those 1024 files.

Can see any bug on my system ?

I use Thunar as my FM and it does not have any problems.

I had NO problem cutting and pasting those 1024 files.

Makes me think that thunar does not rely on gvfs for core functions such as moving files.
If that’s the case thunar wouldn’t be affected by this issue.