I need help with nvidia driver

Hello everyone!
I am having problems with the nvidia driver in Ubuntu mate 19.04
I have NVIDIA GTX 1060 (on a MSI notebook). I installed the nvidia drivers but I when I try to open NVIDIA X server setting it opens but there is nothing in the box as I only get a white box as you can see here: 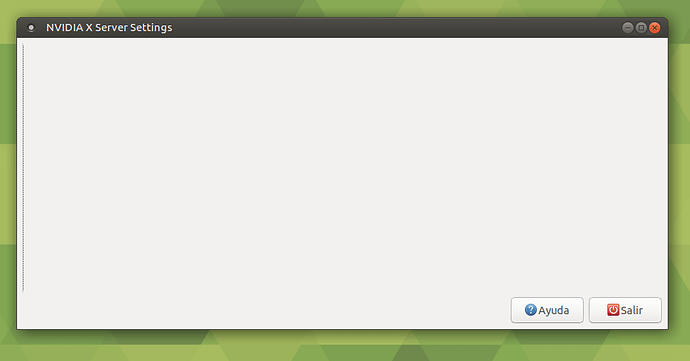 I have also try to install the latest nvidia driver (430) from this PPA: ppa:graphics-drivers/ppa, but I get the same errors.

Could anyone help me?

Have you tried a theme with dark letters? could be white on white which would result in what you see.

I have just tried it but it didn't work. It seems that there is a misconfiguration in the driver but I don't know how to fix this.

do a search on the site for nvidia, there are several solutions that can help you. without system specs it may be hard to know exactly what's going on. You can post the results from inxi -Fxz and it should give us a place to start.

I tried to ask this question at the Ubuntuforums, but nobody could help me because they didn't understand how Mate works with graphics cards. I was adviced to switch to the regular Ubuntu, but I really like Mate so I want to see if I can make it work first. The situation is that I have a problem with using the Nvidia-396 driver on a laptop running Mate 18.04. I have a brand new HP Pavilion Power 15-CB084NO laptop with a Nvidia Geforce GTX 1050 graphics card, and I'm trying to use an external m…

Sure. I apologize I didn't do it. I am really new on this stuff

This is what the command showed me:

I looked at the other post you linked me but I think this is a bit different because he couldn't run the driver, but theoretically I am running it.

I don't know how you installed originally your NVIDIA driver (before the one you installed from ppa:graphics-drivers/ppa), but what I did (also on UM 19.04) was to open Software and Updates and, in the tab Additional Drivers, selected the recommended NVIDIA driver (by default, Nouveau was selected): 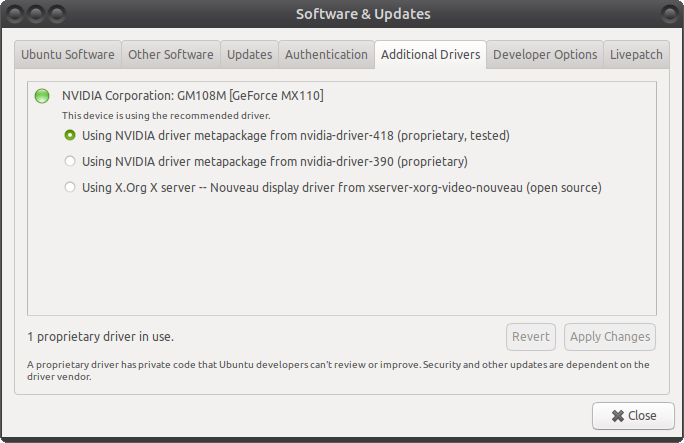 You have to wait a few seconds for the options to appear in this tab, while it searches for the drivers. Once selected and clicking Apply Changes, you'll have to wait for it to download the files needed. Then I guess you'll have to restart (I don't remember if it's a restart or logout).

Then you can open the NVIDIA Settings (either from the applet in your panel or from the Control Center): 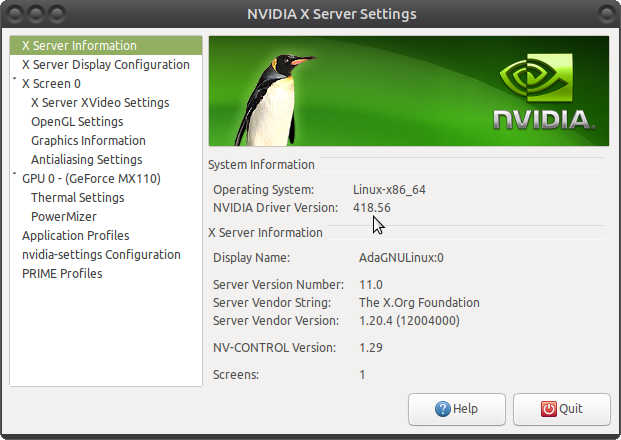 Now --- you say “theoretically I am running it”, but I don't think so: compare my inxi output under Graphics:

That is, you have a mixture of drivers (fbdev,nouveau,nvidia); I just have nvidia.

3)Therefore, I don't think you're using NVIDIA, and your inxi output reads

Hello!
The first time I installed ubuntu mate 19, I tried to install the NVIDIA drivers from "Software and Updates" but I had the same problems I mentioned. That is the reason why I tried the ppa drivers.

Fortunately, I solved all the problems by installing Ubuntu mate 18.04.3 LTS and NVIDIA drivers from the ppa.
I simply cannot understand why NVIDIA drivers worked on the LTS version and it didn't in the 19.04 version.

Thank you guys for helping me