This current revision of the guide on 02/05/2020 intends to shorten the guide while integrating my new presentation style. As such, it may appear different from when you had last read it, but the content is still the same.

My previous efforts at installing BetterDiscord is a trainwreck. Because of this I finally got around to investigating how to make it work, and a user by the name of Observer of Time made possible the means to install BetterDiscord. This will resolve every single one of your issues with installing it on Ubuntu and other open-source systems. This will work guaranteed (at least in a live session).

This provides the means to install additional utilities as plugins for ease-of-use and modify its appearance with themes which can help to enhance your Discord experience by skinning the client to match with a system theme or other preferred appearance.

You should have installed Discord and run it the first time before performing any of this. Be sure you quit Discord before following the details below.

This is pretty straight-forward. You can use a variety of means to install it here but if you're on Cosmic, you will have to do some tinkering when using add-apt-repository. As follows;

In x-terminal-emulator:
Replace pluma with your preference if desired.

Then paste the following;

In pluma or your text editor of preference:
Replace with

Once you've saved the changes as shown above:

Before you begin, you have to do this first since betterdiscordctl doesn't do this automatically (subject to change):

Yes, case does matter, for you Linux initiates trying to do this.

After creating the directory BetterDiscord needs to see for population, you can then perform the following for a very verbose installation procedure:

In x-terminal-emulator:
See notes below for how to complete the command shown.

Once finished, it will say so.

If encountering problems with the command above, consider the following:

Now that it's working...

When running it for the first time, you might be flummoxed about what plugins and themes are available. There are a couple of plugins which help with that, which you can put into ~/.config/BetterDiscord/plugins:

Some plugins are dependent of other plugins. Some "Themes" may intend to enhance functionality of the desktop client and / or themes similarly to plugins. Some extensive themes may interfere with the functionality of other, less extensive or special-purpose themes. Not all themes support popular plugins. As an end-user, you agree to perform modifications as necessary so all software provided therein work together, or make a "Best effort" to request software authors support other works.

Check here for a support server which should answer a fair majority of your questions regarding errors and issues with using BetterDiscord. Be warned; the culture within BetterDiscord's development team is more on the acidic side, so be prepared for snark and smart-alec commentary if you present yourself as a complete and total noob.

Man, that was a trip! Took me an hour to get Discord working again, and even more time to debug and publish my newly-updated automation script but I believe it was worth it for the few users of Discord who would be interested in not just installing it, but enhancing their experience with themes and plugins.

I know at least one person will enjoy it.

Betterdiscord's installation finishes here for me. I had to close the window because it was taking too much time. Couldn't run Discord afterwards and reinsalling doesn't solve the issue. Please help.

The Electron installer does not exit gracefully. Did you use the automated script or do things yourself?

There is a file you have to change its name of in ~/.config/betterdiscord/BetterDiscordApp-stable16/lib called `Utils.js which needs to be lowercase. I will reboot into a Linux session and see if any of the foldernames had changed just to be sure.

Quick edit; I was incorrect in some steps, but also the BetterDiscord installer defines its own paths nowdays. If you just went through the motions and clicked next to everything, BetterDiscord stuff will be in /usr/local/share/BetterDiscord. If you screwed up at the Utils.js step, it must be done sudo, sorry there. If there were any issues with the installer, then delete the Git directory you cloned and try again, double-checking yourself. If it was an issue with my script, paths required are hardcoded; the “Things to do” bit which is prompted in the script prior to the BD installer running shows those paths for a reason.

Another quick edit: Fixed it. BetterDiscord works for me, except it did error out with bdStorage being an issue. I am going to edit my script to resolve that.

One more time; This is an additional step in my script;

Sorry but… I didn’t get it through. What do I have to do exactly right now?

Apologies for replying laate, I figured you would resolve the problem on your own. The code I posted in my comment prior is the answer if you have come so far to launch Discord, but then get that odd JS exception and BetterDiscord’s prompt about bdStorage.

The BetterDiscord installer does one thing wrong every revision, I’ve found. The thing that is wrong this time aside from utils.js being messed up is bdStorage.js. Both files load with one letter that is the opposite of trhe case it is suppose to be becuse most Linux filesystems are case-sensitive.

Here’s everything you need to do to hopefully make BetterDiscord work if you had used my script previously beecause some things did suck about it; 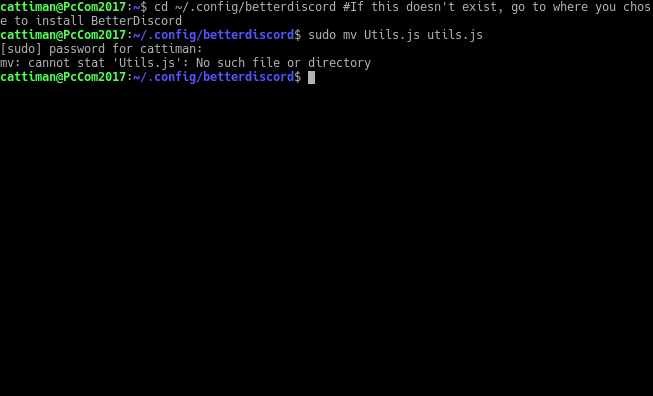 Then do a locate for it, piping it to less in case you have a huge list of these files;
locate Utils.js | less

Do the same for bdstorage. From what you had shown me, if you went through the motions you should look for Utils.js in /usr/local/share/BetterDiscord had you blindly clicked next to everything.

Did you ever resolve your problem? Sorry to be the one asking for a follow-up, and sorry your first experience with this software had to be a negative one.

If you want to try again in a live session of the system, you can make sure the new version of my script is working fine before trying this again, but honestly we have to fault Jiiks for having the Electron installer add two files that do not have the appropriate case to them.

Hopefully whenever he does “Version 2” of this software he can make an installer that sucks less, and maybe one users don’t have to compile on their system. I see no reason why the installer couldn’t had been compiled for the end-user beforehand.

mkay, so everything works up to here:

the installer does not pop up at all
(sorry, I'm actually using Fedora 25 but this was the only way I could find to installing it)
do you have any ideas to fixing it?

You certainly shouldn’t use my script because it’s for Debian systems only but you should be able to manage with Fedora on your own.

Sorry then. I’ll take a look at getting Discord (and BetterDiscord) working in F25 later on.

I managed to figure out how to install Discord in F25, and also was able to get the BetterDiscord installer up and running; 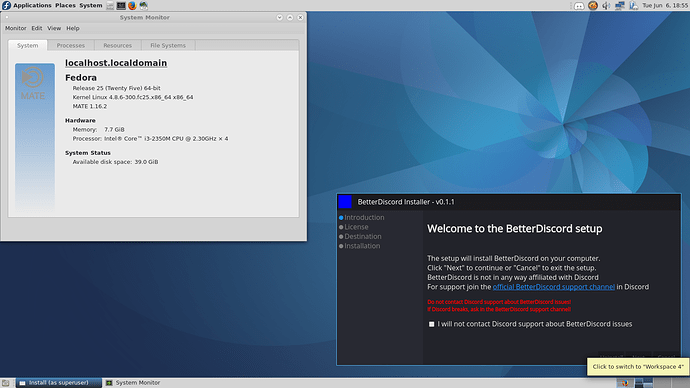 Some things are different because of how I went about this. None of the paths really matter; use your own for betterDiscord itself, but BetterDiscord's requirement of /var/local/BetterDiscord remains hard and fast. Here's the rundown of what I did on F25;

I was able to install npm and git, Do all the Git stuff, do all the NPM stuff, and make the installer usable.

One more quick edit to drive the point home it works on F25; 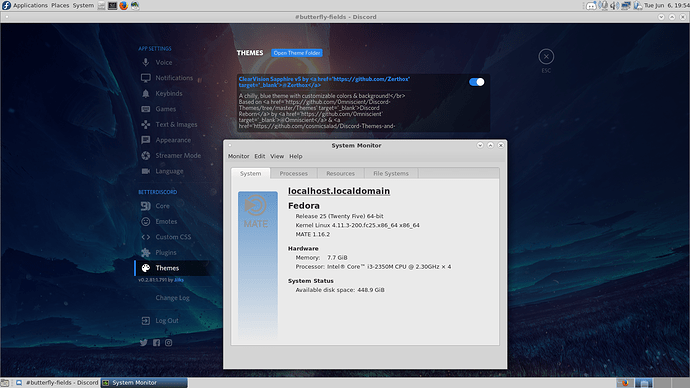 I’ve sort of got it working but it’s not 100%
only the ‘custom CSS’ option works correctly, and there seems to be no betterdiscord folder at all but it’s a step in the right direction at least ^^
thanks for your help, I’ll keep working on it for now

edit
after far too long, it’s working
thanks for all the help ^^

I heard people around the net and maybe here were having this common problem. A friend and I fixed it together and I thought I would share!

After following all the steps and installing better discord (and trying to uninstall it and install regular discord again) I got this error:

What we did to get regular discord working again:

This is where the files that keep directing discord to the error are living, I believe.

Hope this helps anyone who has been trying to revert back but cant!

This should be linked from the github, the only way I was able to install it on Void Linux, there was no other info anywhere.

I didn’t want to run electron as root, so to install it I chown -R’d /usr/share/discord as my username and the group the same

Not the best solution, cuz now every app can write to the discord folder, but it works.

Also, to fix the javascript error I had to:

If you’re a newbie and you’re reading this BE CAREFUL with chown.

I don’t need to chown anything if I am linking into a directory I own. That’s part of the reason why I took to that method rather than chown'ing the directories the Electron installer made, and documentation from the BetterDiscord guild stated to run Electron as root, so I went with that.

The tutorial didn’t mention moving /usr/share/discord to somewhere else, and then replacing it with a symbolic link. /usr/share/discord is where the discord files are installed after you install the Discord deb, and the files are owned by root. That’s why the Electron installer “required” root. But it doesn’t require root if I chowned /usr/share/discord as my own username. Also, whether the BetterDiscord guild suggests it or not, I don’t feel comfortable running Electron, which is essentially Chromium, as root.