Yesterday MATE Desktop 1.16 landed in Debian unstable, I did most of the packaging for that a couple of weeks ago but the Ubuntu MATE crowd funding paid for the packaging to be reviewed, improved, sponsored and uploaded 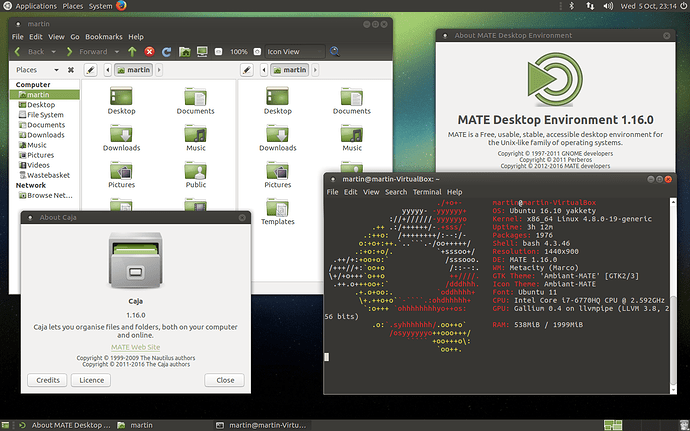 As an added bonus we've also been able to squeeze MATE Dock Applet 0.75 into both Debian unstable and the Ubuntu Yakkety archive in time for Ubuntu MATE 16.10 final. (Did you see that @robint99? ;-))

And if that wasn't good enough, I'm currently working on a build of MATE Desktop 1.16 for Xenial. Providing everything passes testing without issue I hope to publish that to the xenial-mate PPA later this week or early next.

It is important to note that the Xenial build of MATE 1.16 is still mostly based on GTK2+

excellent!! I notice setting the environment variable GDK_SCALE=2 now makes the login screen scale properly on a 4K display. Is there a way to set the panels, window decorations, and the rest of the UI to double scaling now that it’s (mostly) GTK3?

Wow, I really did not expect an update for the Xenial PPA - awesome news!

Hi Marcelo, welcome to our forums

I have not tried this, but here it is:

I think that’s a different build than the one Wimpy announced, though, which should appear in the PPA currently hosting his 1.14 build for Xenial.

IMO 1.14 would be a better/safer way to go. But if you don’t mind dealing with any problems you may encounter with 1.16 then have at it

Am liking the 16.10 UM & GTK3 a lot. I’m just sad though that the ability to pick different colors is gone in the Appearance app. If you picked a theme & clicked on Customize, in the 1.14 version there was a color option between Controls & Window Borders. It’s missing in 1.16.

But I’m happy, even though I lost over half my old themes even though they had GTK 3.0 folders in them.

Hi. I noticed that in 16.10 under appearance/customize the "colors" tab is no longer. Why? This was a very handy option.