Hello. I work part time at a used note computer store in Japan. There is a problem in re-selling used computers, it is because many computers do not have OS or have fake Windows OS.

Our store is unique, it is because we provide Linux with any purchase.

We attempt to provide Linux distribution that is very close to Windows 7, and easy to use. The current choices at the store are:
-Linux Mint 18 Mate disk
-Linux Mint 17.3 Mate pre-install
-Manjaro 16.06.1 xfce disk

Until the previous month, Ubuntu Mate was also a choice. It is no longer provided by the store.

The reason is too many customers do not understand it, and ask for another Linux disk instead. The most common complaint:
-it is unclear how to install software. Many customer assume that the welcome center is 100% of the software available for Ubuntu. Even if you list alternative software center, the user does not know what to install (we tell them to install Gnome software).
-the menu is difficult to use. We must tell the customer to use Mate Tweak and enable ‘advanced menu’

We are unable to pre-install any Linux OS (except for Mint 17.3) so we cannot change to advanced menu and install Gnome software for the customer.

It is my thought that customer is higher likelihood to continue using Manjaro and Mint because:
-it is possible to press start button and search for software from the start menu immediately
-it is very clear where to access the full software center

Thank you for taking the time to read this. I am sorry for my poor language.

On that note, did the Welcome/Boutique version changed since 16.04.0 or was it not in accordance with the SRU guidelines?
I'm asking because I find the Boutique's welcome text to be largely self sufficient in 16.04, but I've set Boutique to retrieve the latest software listings so I don't know what it looks like before checking that box. 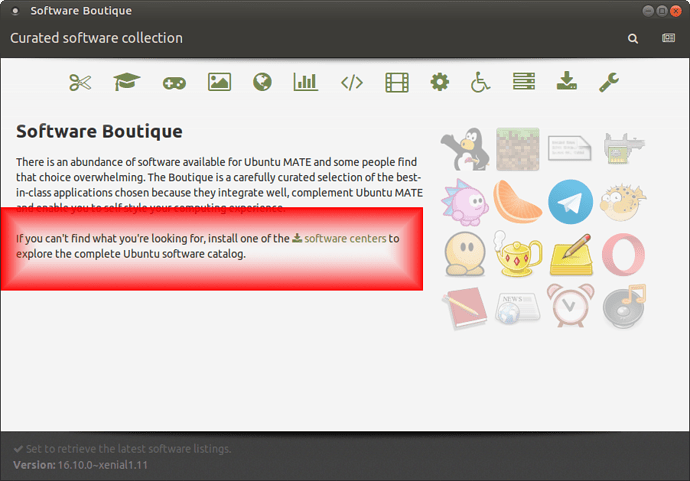 Do you use OEM install? At 15min in this video Joe Collins says you could add other software when you prepare it for the customer:
https://www.youtube.com/watch?v=0w7iNRYrbOM

Maybe you can add Gnome software

Thank you for sharing your story.

It looks like the Welcome application and Software Boutique has not been translated for Japanese.

Translation may help customers in Japan understand the operating system and where their software is sourced from.

On that note, did the Welcome/Boutique version changed since 16.04.0 or was it not in accordance with the SRU guidelines?

The original 16.04 SRU version is rarely (almost never) updated unless it is a critical bug fix. The 16.10 version in 16.04 was actually due to a packaging error… there’s no undo for that.

Hello. I work part time at a used note computer store in Japan.

It is good to know that Ubuntu MATE is installed for second-hand computer sales. I’d be very happy to stop by when I am in Japan next time. I wish there was an international directory on the Ubuntu MATE website with Linux-friendly hardware stores. Is there any chance to get your store listed, perhaps as part of an Ubuntu MATE Market?

The reason is too many customers do not understand it, and ask for another Linux disk instead. The most common complaint:-it is unclear how to install software. Many customer assume that the welcome center is 100% of the software available for Ubuntu. Even if you list alternative software center, the user does not know what to install (we tell them to install Gnome software).-the menu is difficult to use. We must tell the customer to use Mate Tweak and enable ‘advanced menu’

Some of your customer’s problems may indeed be related to the lack of Japanese translations of the Welcome application. Nevertheless it is important that the Welcome application provides more general information on how software can be installed, what different sources and file names there are, what kind of software centers are available and what the advantages and disadvantages are of using them. This information could perhaps be added to the introduction and not just to the Software Boutique. I also prefer the Advanced Menu to be enabled by default.

You could set up PuTTY or TeamViewer for your customers and agree to give them a set amount of additional support that way. You can keep a business license for TeamViewer) on your end, and give your users a personal-use license so they don’t have to pay for it.

After, consumers that need help via TeamViewer could click on a launcher via desktop that does two things;
Open Firefox
Open TeamViewer

This can be done with the following launcher command;
sh -c 'firefox && teamviewer'

You could also make the launcher open PuTTY, though I am not intimate with it. If you need a launcher that does a lot of things, it’s better to instead have a launcher that executes an .sh file with a series of commands that are performed in the terminal.

Other enhancements I would include if I were running a shop;

All I can think of at the moment. And that can apply to most other Linux systems.

@xaxaddd800mm Thanks for the feedback. There is some food for thought there

I’ll have a think about how we un-blur the line between Software Boutique and full Software Centres. Regarding the default look and feel, I have had thoughts about this in the past. My favourite idea is a plugin for Ubiquity so you can select your preferred default user interface during the install or oem-configuration.

That is some interesting data there. And not so bad.

In all honesty, didn’t you just remove the most popular distro in your shop?

On a serious not though, I agree software distribution is a tough problem to solve in Linux-land. This is in fact a pervasive problem across all distros. Canonical Ubuntu in fact is going through a transition period in which they are removing support to the old Ubuntu Software Center and introducing the new… whats-its-name… that isn’t currently as rich in software offerings as the old one.

But I don’t think Mint method is better. In fact I think it is much more dangerous. The Software Boutique is the way to go, in my opinion. And, along with the Welcome Screen, the highlight of Ubuntu-MATE and almost unique in the entire Linux Universe. It is heavily curated, which makes it potentially much safer to use, and tries to provide a good number of alternative applications across a wide spectrum of software types. It also understands it can’t stick only to the official repos, but knows where to look for safer and better maintained PPAs, by preferring those offered by the official developers.

The problem with the Mint community-based method is that it is hardly curated at all, which means many of the software listed isn’t exactly safe to a new user (some even dangerous). User-comments who are meant to provide some measure of information about the software quality, are instead mostly driven by passion instead of rational logic. And neither are users offered a tool that can help them make the best decision on which PPA to choose or whether the official repo version is better than a newer one. So your customers might seem to have a more straightforward way to choose software, but in fact they are being offered a much faster way to ruin their system (so much for Mint famed stability).

Ultimately, you won’t find a good solution anywhere. The software distribution model of the Linux ecosystem is what’s behind the difficulties in making software available to users in a clear, safe and straightforward way. There will always be compromises to be made. And I think Ubuntu-MATE makes the right compromise by not exposing too much software to new users who are in higher risk of making the wrong choices, but still offering the huge Linux software universe through Synaptic to those users that know how to use it.

I wonder, if the Software Boutique was more open, less curated and presented a much bigger choice of software to install – as you would like – how many more support calls from disgruntled customers you would get, not because they can’t install software, but because the software they installed just broke their machine…

But I agree that perhaps Synaptic should take a more prominent role alongside the Software Boutique and not be relegated to second plane alongside so much inferior options as the obnoxious AppGrid or the defunct Ubuntu Software Center.

this is to take it seriously, a very important decision for someone who installs a new operating system is the availability of applications to install, software boutique should indicate at first glance that there Center software and Gnome sotware, which took years know that exist. should be changes in boutique Software. regards…

I don’t think that Synaptic comes pre-installed in Ubuntu MATE, unless you mean to say that synaptic is installed along with the system?

I distinctly remember Synaptic not being a thing there because of the software offerings there being woefully inadequate in explanation.

Ideally, I think Linux systems need some form of system restore similar to Microsoft Windows, and a modified version of dpkg to make a restore point for every install. But that’s just me, and this is probably going to become a topic split.

It has, but nobody cares, and a lot of people don’t want to use Linux because they don’t have system restore like Windows. The name is Systemback!!! Another one is Timeshift.
So, I recomand Systemback to be added to the Software Boutique. Another piece of very good software that could help people to use Ubuntu Mate (Linux) with Windows is Redo Backup. The problem is that was abandoned because this is the tradition in the Linux world. Nobody cares! Clonezilla is not a solution.
Another problem with Ubuntu Mate is that is not possible to use another Theme and Icons because parts of the panel are turning white and some parts are remaining black.
Maybe some one will do something.