No room on /boot for updates

When I run Software Updater, it tells me that there is "Not enough free disk space. The upgrade needs a total of 48.2 M free space on disk ‘/boot’. Please free at least an additional 3,424 k of disk space on ‘/boot’. Empty your trash and remove temporary packages of former installations using ‘sudo apt-get clean’. "

Running the suggested “sudo apt-get clean” produces no output and no change in the behavior of Software Updater. Another suggestion was to run “sudo apt autoremove --purge” – this also made no difference, although it did remove a handful of other packages.

Can any of these files be safely removed? Is there some Raspberry-specific naming of the kernels that I can use in Synaptic to find one to remove?

have you tried “Bleachbit”?:

Have you tried running:

My question was what file(s) – specifically kernel images no longer in use – could I safely remove. Unless Bleachbit has that knowledge, it won’t be useful. I doubt that it arbitrarily decides that kernel images are unimportant.

Another responder asked whether I had run “sudo apt autoremove” – yes, and to no effect.

But I managed to find a way to get past the original problem of having insufficient space in /boot to support system updates.

I did a work-around as follows. The kernel-image files themselves are used only at boot time: the image is loaded into RAM and executed. While it is running, the file itself will no longer be used, until the next boot. So it should be safe to move one of the images temporarily, perform the update, and restore the image to /boot. I inspected config.txt to see if a named image file was being invoked at boot; the kernel-image description was commented out. That means the system uses the default “kernel.img” at boot. I moved “kernel7.img” to /tmp, which provided enough space in /boot to allow updates to be done. After successful update, I returned “kernel7.img” to /boot. No problems since.

A longer-term solution would be to take the SD card out, put it into a USB reader attached to another system, and use gparted to enlarge the /boot partition. (I would have to first reduce the size of the other partition [root], and then assign the freed-up space to the /boot partition.)

Seems rather drastic just to do a simple maintenance task of removing defunct kernel images.

I also found in /lib/modules some evidence of six kernel images having been on the machine at one point or other. Makes me wonder if rpi-update is automagically doing some of the kernel-image maintenance for me – like keeping just the last two kernel images in /boot. That would, of course, be useful; but a little documentation to that effect would go a long way. And it still doesn’t solve the problem of having the distro set up a /boot partition that soon ends up being too small to accommodate ordinary maintenance.

Thanks to all for their assistance.

Ubuntu Cleaner might be more useful for cleaning old kernels?:

Free Up Some Space With Ubuntu Cleaner - OMG! Ubuntu!

Say hello to Ubuntu Cleaner, a system utility designed to clean browser caches, removed unneeded apps, and get shot of old kernels. It might just be your 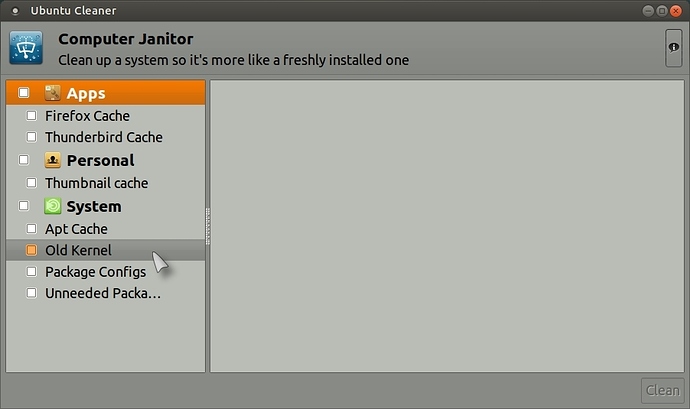 Thanks for the suggestion. My hunch is that Ubuntu Cleaner is aimed at platforms other than the Raspberry Pi, which currently has idiosyncratic procedures for kernel updating. Ubuntu Cleaner probably does the “linux-image” tricks that work everywhere else and not on the Pi.

My kingdom for some Pi-specific documentation on kernel-maintenance tool behaviors. All I have so far is “only use rpi-update” in the welcome window. I just get the sound of crickets when I try “man rpi-update”.

Perhaps this link may be of some assistance -

Perhaps this link may be of some assistance -

Did you copy the right link? I ask because I see nothing kernel related

It was meant to be another site to post questions concerning the raspberry pi, not specific to the lack of /boot space.

@ptdyma - I don’t see anything redundant in that original listing, but you haven’t shown the space use/left in /boot (df -h): I have 45M free of the filesystem 60M.
Perhaps there is something which would show if you used ls -al /boot to show all the files.
Also, there might be something in the /boot/overlays/ files

I too have this problem. uname -r gives 4.4.19-v7 as the answer. I currently have no way to fix this and provide enough space for the update. Help would be appreciated

What were the results of dandnsmith suggestions?

Not sure what works with ARM, but on a standard install:

Just thought of something else that could list the installed kernels.

@pdtyma, I recently installed Ubuntu BSP kernel on a Pine A64 board (2GB). This board has a similar ARM CPU to the Pi. An image was created by a contributor to the Pine64 forum called Longsleep. This is based on the BSP kernel. After resizing the filing system and running a script to install the Mate desktop, I tried to run Software Updater from the System/Administration menu. I got the same message about freeing space on /boot.

This thread, which I started on forum.pine64.org asked about this problem. There were no previous kernels installed. This was fresh install. The answer given by the forum member MarkHaysHarris777 solved my problem. This may work for the Pi as well. See forum thread: http://forum.pine64.org/showthread.php?tid=3202

Let us know here if this works as I have a number of Pi boards.

I have a similar problem with the software updater, but using the command line works for me. You could also try resizing the /boot partition (and shrinking /root) using gparted on a linux machine.

I, too, have a lot of free space on /boot – at least 45 MB. The problem is that the “SoftwareUpdater” program says it needs at least 3 MB more.

Thank you for your suggestion. After browsing the site you cite, I find two things:

I tried the autoremove you suggest – it made no difference in the behavior of SoftwareUpdater.

Your suggestion about listing the installed kernels works great everywhere except on the Raspberry Pi, which is where I encountered the problem.

It doesn’t help that all Raspberry Pi kernels are named “kernel.img” – and I’m unaware of a tool that can be used to tell me what version it is. Invoking “file /boot/kernel.img” just tells me that it is a kernel image for ARM, but offers no information about version number.

I thank all the responders for their suggestions.

Here’s where I come out on all of this.

If there’s anybody out there on the development team who can share this knowledge, I’d be happy to volunteer my time to write, edit, or proof-read a kernel-maintenance document for the Raspberry Pi. Until then, I’ll have to temper my enthusiasm for installing the security protections of new kernel releases with the knowledge that a failed update may require starting my installation from scratch again.