Been having frequent crashes requiring reboot.

3.Ran /var/syslog. At line Apr 5 23:12:45 Nouveau driver faults. This is precisely when the last crash occurred.

Q: Does this mean it’s a driver problem and should I try another…if there is one?
Below are the /var/syslog and /var/kern.log files with the Nouveau Fault reference. Any assistance would be greatly appreciated.

have you opened Control Centre > Additional Drivers to see if there are any other drivers available for you?: 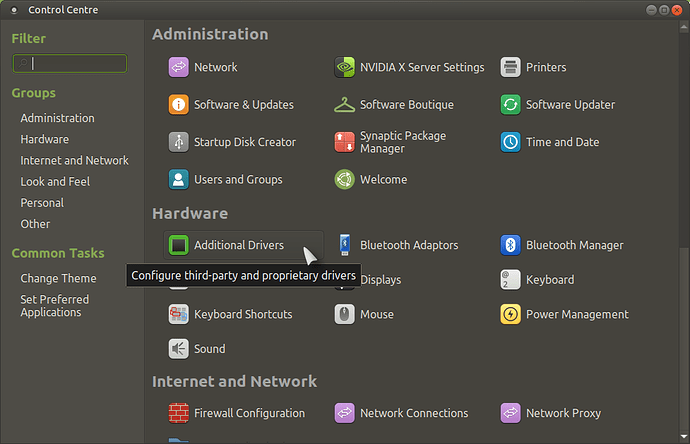 Choose the recommend (Tested) drivers with the highest number should any be available to you!.

There is one on the Nvidia site but I’m a little hesitant to try that one, it mentions that it might be better to use the one supplied with the OS.

Does this mean I’ll be needing a new video card or is there another course of action that you can suggest?

Q: Does this mean it’s a driver problem

Does this mean I’ll be needing a new video card or is there another course of action that you can suggest?

Maybe a least radical option would be to use an other Kernel. Since your hardware appears stable in the live session maybe use the kernel from the LiveUSB.

Was going to chroot the kernal from the Live usb…but opted to re-install 18.04 beta instead. I have nothing saved on this computer so it seemed like an easier and quicker way to get a fresh kernal installed.

Upon booting and running the software updater a couple of times and rebooting and then installing the drivers and updating the firmaware and codecs I rebooted.

Back in I clicked on the mate tweak link and the same crash with diagonal diagonal lines occurred, with the colors of the underlying window.

I’m wondering since the problem is pointing to a driver issue if I should have updated the drivers after I re-installed the OS? Not sure what video driver is implemented upon installation. No additional drivers are available for the card as well.

Not sure where to go from here…any help greatly appreciated. Thanks

So, I’m not an expert on driver issues, and maybe someone else will be able to offer a better suggestion, but if the update is causing the driver to stop working, maybe hold the update for now. This is not a viable long term solution but I don’t really see another one for the short term. :/

In order to determine the video driver used at any point, you should install the inxi command if you don’t have it already (it’s been nixed from the Bionic seed but Wimpy is going to put it back) and use it like so:

You can check the version of the nouveau driver using:

Well thanks for all your help ouroumov. I will try to reinstall and not update to see what happens checking versions of nouveau with inxi-G which I already installed a few days ago.

Been researching this problem extensively and as a newbie to the linux world, going on my 7th day actually with this wonderful OS, have learned quite a bit about linux and it’s it’s inner workings and find it fascinating.

This crashing video problem is a bit of thorn in my side I must admit…trying to tap away some of my newbie enthusiasm…but I just find this OS too good to give up on it.

Maybe Wolfman whom I’ve spoken to recently has some further suggestions or ideas as to a course of action…or anyone else for that matter if they happen to stumble on this post. I’ll welcome any insight.

One last question for you ouroumov:

Any recommendations on video cards models or brands that are more compatible and known to work well with UM?

Thanks again for all your help…

it might well be a corrupt ISO download but I really don’t know, I also have an Nvidia card which is old now but still works and still has drivers available!.

Try a new daily build ISO and do a fresh install again, I know it is a pain but it is really all I can think of for now!:

Well some progress on the crash front, a combination of the ideas posted by ouroumov and yourself.

Nouveau driver was faulting in 18.04 and you Wolfman suggested I install the proprietary driver from additional drivers…but none were available in 18.04.

Ouroumov said I should try another version or run off Live usb to reload a fresh kernal. I only tested with 18.04 Live usb.

So yesterday I installed 16.04 and got the option to choose the Nvidia legacy binary driver from additional drivers. Had to cycle through it a few times and change sever to get the radio button to stick.

Then upon reboot I checked the log report, Nvidia driver was up and running and no faulting to be found anywhere and no instability.

Then I knew we had found something and it felt good…y’all know the feeling.

Then tried the same the same thing with 17.10…worked well as well. Currently running stable with 17.10 with Nvidia driver.

The next thing I’ll be performing will be an upgrade to 18.04 and hope it ports the proprietary driver.

If it doesn’t, then I’ll try to install the driver through the terminal and cross my fingers. Will have to track down the terminal command for a video driver update …unless you all know it…

So problem solved!..thanks Wolfman and ouroumov. With your insight and excellent suggestions and a little bit of sweat on my part it all works!!!

Hello LoRider, thanks for detailing the issue.
I have similar crashes. using ubuntu 18.04 LTS and kernel 5.4.0-51-generic. Default driver installed.
I have tried alternative drivers under the same OS , but I couldn't get it set properly, between recursive logout issue, couldnt set the screen resolution right etc.. I gave up and back to the built-in driver.
every now and then I have a crash, the log never or rarely shows the same report so it is hard to investigate (plus I am also not that good with that level of debugging).

I am using a Dell Prcision M4800, a very good and expensive laptop, so quite annoying that Nvidia don't do their job properly on the driver side.

And more weird, I never managed before but this time I used the SysReq s command and it came back to life without rebooting.

Thanks for any help, and if a Nvidia guy is reading it... please comment too!
Thanks

How to upgrade Ubuntu (Mate) via the terminal Tutorials & Guides

Hi all, this is for anyone who wants to use the terminal to fully update their current installed OS to the next available version, you just need to follow the next few steps and you can update directly without using the on-board update tool (Software Updater). First, make sure that your current software sources are set to your liking, making sure that the "Canonical" repositories are also active if you wish to also update any non-free software you might have installed such as Skype. Make sure…