The advanced MATE menu should be the default menu

My uncle wanted to try out Linux and I installed Ubuntu MATE on his laptop. I put it in Redmond mode since he’s already used to Windows, and switched out the basic MATE menu for the advanced version. Much better.

The basic menu that came from GNOME 2 looks too basic. Unless the user is using the GNOME 2 mode, MATE itself should use the advanced menu by default. It’s more useful and much better. This is especially true when its in Redmond mode.

Except here’s the thing about that; Ubuntu MATE is pandering to old Ubuntu users by providing something similar to Canonical’s OOTB experience, pre-Unity.

I will say, however you had tried a Ubuntu system at a fortunate time; MATE Menu is based entirely from Linux Mint’s mintMenu, so much the original author of mintMenu is in the software’s configuration files. For some time, mintMenu had been more difficult to install because of odd package requirements which hadn’t been easily satisfied by the common user, and because of the whirlwind of UI changes lately it’s been pretty hard to install anything like it elsewhere.

Nonetheless that is why MATE Menu was compiled; to strip the Linux Mint identity from it and make it a universal, generic Windows-like menu for all systems using MATE. Had you been a user five years ago you’d probably be on Linux Mint just to have the mintMenu, since it would be the easiest route to a Windows-like user experience outside of Windows. (complete with security issues and senseless software decisions, depending on who you ask about Mint.)

Though if you were around when Ubuntu still used GNOME 2, you’d probably be whinging about how you need to install mintMenu to make Ubuntu feel like Windows. Which, dare I say would make you the laughing stock of any Ubuntu (or Debian) community.

This is a thread I wish I did not read. So I was curious about the different menus and did try the Redmond first. When I switched back to Ubuntu MATE all my panel icons/apps were gone. I rebooted but my panel appeared as the day of my first install. I did look at the other menus at this point. Still prefer Ubuntu MATE menu.

That’s because you didn’t save your layout beforehand. mate-tweak allows you to save one custom layout with your preferences.

Thanks. I see that now and did save it. I also locked my panel, but not sure if that would make a difference

The basic menu that came from GNOME 2 looks too basic. Unless the user is using the GNOME 2 mode, MATE itself should use the advanced menu by default. It’s more useful and much better. This is especially true when its in Redmond mode.

But have you really used it yet? You’ll find it isn’t as good as you might think. It’s not very configurable and can’t handle well a larger number of entries. And It has virtually no theme support, for which reason it can quickly look ugly when you wish to change your desktop themes around. Meanwhile its supposed improvements are mostly poor-man solutions to more sophisticated programs in Linux. Once one gets to know them, the advanced menu becomes virtually useless and will only serve the purpose of the traditional menu, to launch applications. I always found – and excuse me the bluntness – the advanced menu a gimmick that only serves the purpose of giving the user an illusion of a feature-rich menu.

But above all this, there is also the problem that making the advanced menu the default menu will rub many a user the wrong way, who expects the MATE project to stay committed to a pure GNOME 2 experience.

Welcome to the forum YamiYukiSenpai. Some related information you may find interesting.

Allow me to contest that notion for a moment. If you can interpret a little bit of Python you can modify how the menu functions. I’ve been very able to modify the menu to only use XDG apps and launch whatever software library maintenance program I wish.

However that means you need to do some screwing around in some obscure configuration files. And to be honest, the XDG utilities should be default, rather than MATE software which the user might remove out of preference and / or necessity. This is because xdg-utils present a series of binaries that operate depending upon what is specified to be the default application with xdg-mime.

Not to mention, there’s also the alternatives system allowing users to configure all of the other X stuff, such as cursor, preferred terminal emulator, user things such as web browser and mail client, &c.

I dislike the “advanced” menu. I guess I like ‘basic’ - the advanced menu might look a bit more ‘modern’, but I don’t think is better or more useful at all.

You’ll find it isn’t as good as you might think.

I understand what you mean. Heck, it feels a little unstable sometimes.

For anyone who wants the basic menu, the GNOME 2 mode is still available. And honestly, I don’t see much (or any) difference between the 2 styles right now.

For the Redmond style, using the advanced MATE menu is the better option because it’s closer to the modern Windows Start menu. Some would see the basic menu as a downgrade or inferior.

What do you use the menu for?

I never used it.

I open all my application with Albert quick launcher mapped to the shortcut Ctrl + Space. Faster and more convenient for me.

What do you use the menu for?

For general users, they are more familiar searching with the menu.

I see. Still, I cannot imagine anything easier than a quick launcher that allows you to just simply type in what you are looking for and launch it with a single press on your return key.

People can be woefully inefficient, especially if they have been taught the most inefficient means of performing a task. I use CMD and direct filepaths myself in Windows but that’s not everyone’s jam.

That’s the strength Ubuntu has; oftentimes people don’t know the most efficient way, and though those dependent on GUIs lose a little bit of time per action, some users would lose a whole lot more time trying to do things a “Superior” way. So there are a variety of interfaces and interface configurations to suit everyone’s style, from basic launcher to the most fancy of buttons.

I would love to use the Advanced menu. But it doesn’t have an icon that scales, so it looks ridiculous on my 64 pixel panel… I guess I should file a bug report or something, I just don’t understand nobody has ever noticed it.

@pepa65, can you show a screenshot?

Sorry, right after posting this, I thought, I can just pick an icon manually, and so I did. I don’t know how to get the default back. What was its location?

Since SVG is a vector graphic and scaleable, it looks like it sizes for the font that would be there. I assumed you removed menu text leaving only the icon? This is my 17.04 VM in that condition.

EDIT: And here it is upper left. 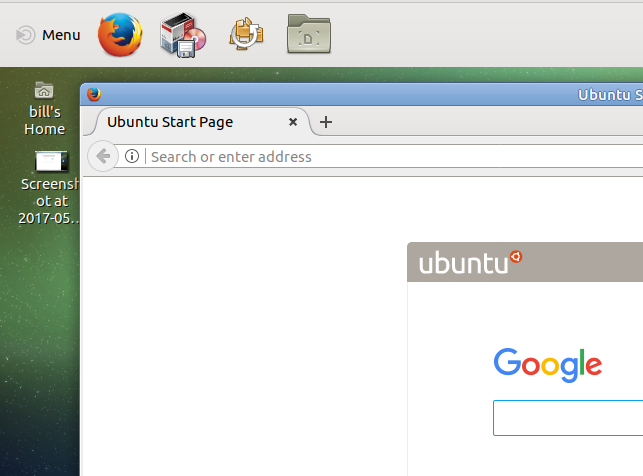 Yep, I see. Technically a 64x64 PNG works at real size - a 128x128 PNG shows what I mean. The problem seems to be undesired handling, specifically, of SVG icons.

I say undesired because it may be that way by design. But this is inconsistent with bitmap (like PNG) icons.