The Ubuntu MATE 18.10 final release is out and features the latest MATE Desktop, a bespoke image for the GPD Pocket and GPD Pocket 2 and improved support for AMD GPUs. Check out the release notes to learn more 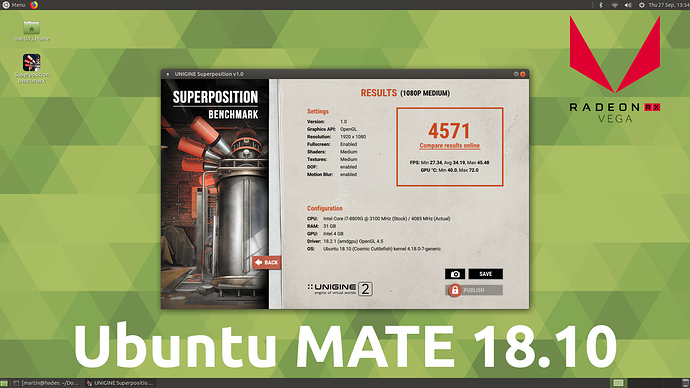 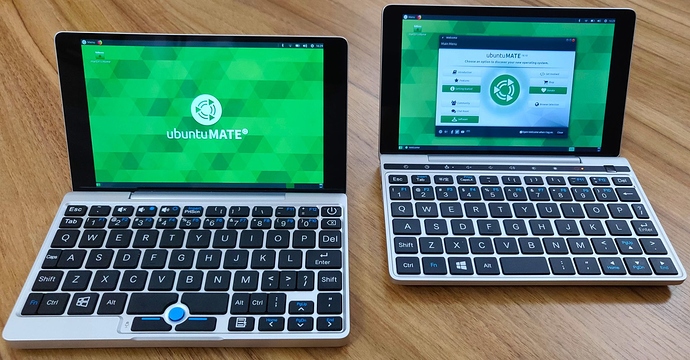 Saw that the update page had changes (I’ve been checking every half hour or so), then came here and refreshed about every thirty seconds until the announcement showed up. I may have to look into the GPD Pocket.

Thank you so much for all your effort

I don’t take it for granted that you guys do all the work for free.
Keep going - yes, I am selfish - for my own sake. You have changed my life this year.
There are many 90% distributions out there , but there is only one 100% distribution, and that’s Ubuntu Mate (imo).

Installed twice, via Software Updater’s Upgrade option, which seemed to work just fine. Then via clean install. (To confirm a small but significant regression bug in Compiz wasn’t caused by the upgrade process - it wasn’t, I will file Bug report. Done - Bug #1798834)

But I want to publicly thank Wimpy - again - and the rest of the volunteers for not just bringing us U-M, our Gnome2 replacement desktop, but sticking with it and improving it time after time after time.

In the last month I’ve had cause to use Ubuntu 10.10 again at the local Adult Ed. school, and while the 2 versions still look related, it really stands out how far you guys have brought it in only 4+ years!

Updated last evening to Ubuntu MATE 18.10. Everything went smooth and my PC continues to work and work and work… as usual

Congratulations to the Ubuntu MATE team and THANK YOU SO MUCH for all your efforts!

I updated my daily driver an Intel NUC7i5 and it went awesome. I the command line to do the upgrade so I am not sure how the GUI part works.
THANK YOU all. Thanks for all your hard work!

I just played around with the 18.10 live image, and it does appear more stable than 18.04 so far, also the bug with incorrect icons in the dock applet appears to be fixed - DXX-Rebirth and Asunder show up with proper icons now.
The weird mouseover bug on the topmost pixel row of the top panel (https://bugs.launchpad.net/ubuntu-mate/+bug/1778418 / https://launchpadlibrarian.net/376710419/example.mp4) still exists, though - maybe something for 19.04 …

When I click the Upgrade… button, the dialog disappears and nothing happens.

If I run do-release-upgrade from a terminal, it tells me

“[email protected]:~# do-release-upgrade
Checking for a new Ubuntu release
Please install all available updates for your release before upgrading.”

[UPDATE] I have dual boot on this computer, and also have Ubuntu Mate 18.04 running as a bootable OS. I just tried to upgrade that installation, and it fails in exactly the same way. I only recently installed that instance, so it’s a very simple installation at this point (unlike the VM which I’ve used for several years and installed numerous packages, including PPA.) So there appears to be a general problem in this upgrade path.

I made a fresh install on my GPD1 from USB including encrypting the system. Unfortunately, booting is a problem now. After grub the screen turns black and stays black. Ctrl+Alt+backspace leads to a short flashing of the screen and the computer reboots . Any ideas are highly welcomed.

Edit: I found this recently. Maybe this helps finding the problem. My error message is the same as mentioned here:

OK, so I am going to sound like an idiot, but that is ok. How exactly do I upgrade from 18.04 to 18.10? Must I reinstall and have to go through transferring my data? Do I just download and start the process without having to do a fresh install? I am confused.

I guess I have half a brain after all. I figured it out. To get the 18.10 to show up in the software updater, you need to set it to show all versions, not just the LTS versions. I am now on 18.10 and hoping this solves the problem I have with burning ISO’s.

I am with 18.10 - update went smoothly.
Most if not all PPA disabled, though.
Will figure out what to do about it.

I cannot get a single burner to work, Tried Brasero, XFburn, and k3b. All fail. Please help as this is a deal breaker for me.
How can I go back to 18.04 without having to save and reinstall all my data?

I downloaded and burned the AMD 64-bit iso file since Ubuntu MATE keeps track of the version used in the install. I wanted a fresh slate.

I was very satisfied with Ubuntu MATE 18.04 until it went into total meltdown - would not even boot. As long as I was going to have to reinstall everything this was the perfect time to try the latest.

Boy was I wrong. I found three bugs before I even got the Ubuntu programs loaded. (Even the ubuntu-bug -w command got error messages.) After three days of trying I gave up and reinstalled Ubuntu MATE 18.04. This cleared up most of the bugs but there are still some that span versions (i.e. the “More …” buttons in the Software app still do not work).

Can you be more specific about what does not work with these in 18.10 ?
I just booted the 18.10 live image off an SD card, installed XFBurn and Brasero and successfully burned a data disc in both, even without having to fiddle with the file permissions as was needed for Brasero in 18.04.

Just a few things I’ve noticed about the new release:
The ‘Mutiny’ layout is less buggy (I’ve always had trouble with it, and it’s not flawless, but it’s better).
The volume and brightness adjustments now go up continuously when I hold down the buttons; before, I had to hit it for each tiny adjustment. This was something I had missed from Windows & Mac.
All the bugs I saw while running the Beta are gone, so

to the devs for their excellent work.
I have been getting an error about the MATE settings daemon crashing (I really should file a bug report if it hasn’t already been reported), but it never gives me any real problems (I do leave ‘restart’ checked).
I think I’ve booted into my vanilla Ubuntu 18.04 partition about twice since installing (I was trying it out after I accidentally deleted my bootloader… don’t ask); as always, I end up coming back to Ubuntu MATE. I occasionally try another distro (I think I’ve done every official Ubuntu flavor, Mint with Cinnamon, Elementary, Fedora (can’t stand the straight GNOME interface), Manjaro, Manokwari, & a couple others), but I keep returning.
A toast to @Wimpy, @lah7, @vkareh, and everyone else who contributed!